Table of Contents ⇨
County of Delaware in Delaware

Kent County is a county located in the central part of the U.S. state of Delaware. As of the 2010 census, the population was 162,310, making it the least populous county in Delaware. [1] The county seat is Dover, [2] the state capital of Delaware. It is named for Kent, an English county. [3] 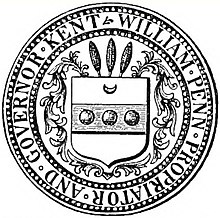 In about 1670 the English began to settle in the valley of the St. Jones River, earlier known as Wolf Creek. On June 21, 1680, the Duke of York chartered St. Jones County, which was carved out of New Amstel/New Castle and Hoarkill/Sussex counties. St. Jones County was transferred to William Penn on August 24, 1682, and became part of Penn's newly chartered Delaware Colony. [5]

Penn ordered a court town to be laid out, and the courthouse was built in 1697. The town of Dover, named after the town of Dover in England's Kent, was finally laid out in 1717, in what was then known as the Lower Counties. It was designated as the capital of Delaware in 1777. In 1787 Delaware was first state to ratify the U.S. Constitution, and became "the First State." Through much of the late 18th century, the economy of Kent County was based on small grain farms. As a result, farmers did not need as many slaves as did owners of tobacco plantations. Delaware had a high proportion of free blacks among its African-American population by the early 19th century. 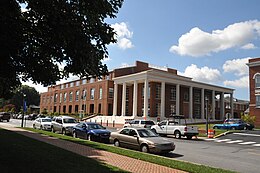 In the 1960s, Dover was a center of manufacturing of spacesuits worn by NASA astronauts in the Apollo moon flights by ILC Dover, now based in the small town of Frederica. The suits, dubbed the "A7L," was first flown on the Apollo 7 mission in October 1967, and was the suit worn by Neil Armstrong and Buzz Aldrin on the Apollo 11 mission. The company still manufactures spacesuits to this day—the present-day Space Shuttle "soft" suit components (the arms and legs of the suit).

Kent County, like all of Delaware's counties, is subdivided into Hundreds. There are several explanations given for how the Hundreds were arrived at, either being an area containing 100 families, an area containing 100 people, or an area that could raise 100 militiamen. [7] [8] Kent County was originally apportioned into six Hundreds: Duck Creek, Little Creek, Dover, Murderkill, Milford and Mispillion. In 1867, the Delaware legislature split Murderkill Hundred into North Murderkill Hundred and South Murderkill Hundred. In 1869, the legislature formed Kenton Hundred from parts of Little Creek and Duck Creek Hundred. Today the county contains eight Hundreds.

The following state highways are located in Kent County: [9]

The county row offices are held by: [13]

Kent County is home to an Amish community that resides to the west of Dover, consisting of 9 church districts and about 1,650 people. The Amish first settled in Kent County in 1915. The area is home to several Amish businesses selling items such as Amish food, furniture, quilts, and handmade crafts. Every September, the Amish Country Bike Tour, one of the largest cycling events in Delaware, takes place in the area. In recent years, increasing development has led to the decline in the number of Amish living in the community. [23] [24] [25] 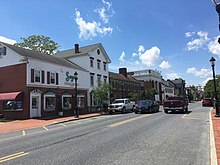