Born in Connecticut, Clark worked as an attorney in several states before moving to Massachusetts in 1995, where she worked in state government. She joined the Melrose School Committee in 2002, becoming committee chair in 2005. She was first elected to the state legislature in 2008, and contributed to legislation regarding criminal justice, education, and municipal pensions. She won the 2013 special election for the U.S. House of Representatives to succeed Ed Markey in the 5th district and sits on the House Appropriations Committee. She serves as Vice-Chair of the House Democratic Caucus, [1] [2] the sixth-ranking post in the Democratic House leadership behind the Speaker.

Katherine Marlea Clark [3] was born July 17, 1963 in New Haven, Connecticut. [4] She attended St. Lawrence University, Cornell Law School, and the Kennedy School of Government at Harvard University. [5] She studied in Nagoya, Japan in 1983. [3]

In her early career she worked as an attorney in Chicago, then moved to Colorado where she worked as a clerk for a federal judge Alfred Albert Arraj of the United States District Court for the District of Colorado during 1990 - 1991 and later as a staff attorney for the Colorado District Attorneys' Council. [6] She moved to Massachusetts in 1995 and became general counsel for the state Office of Child Care Services. [7]

In 2001 Clark moved to Melrose, where she was elected to the Melrose School Committee, taking her seat in January 2002. [6] Clark first ran for the Massachusetts Senate in 2004, but lost 57 to 43 percent to Republican incumbent Richard Tisei. [8] [9] In January 2005 she was unanimously elected chairwoman of the Melrose School Committee. [10] In 2006, she decided to run for the 32nd Middlesex seat in the Massachusetts House of Representatives when incumbent Mike Festa began a run for Middlesex district attorney, but withdrew after he dropped out of the race. [11]

Clark was appointed co-chair of Victory 2006, the state Democratic Party's campaign and fundraising effort for the 2006 gubernatorial election. [12] She spent some time as Chief of Policy and Government Relations in the state Attorney General's office. [13] 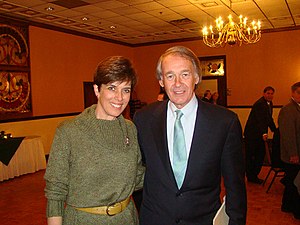 At an event with then U.S. Representative Ed Markey in 2008.

Festa resigned his state House seat in October 2007, to become Secretary of Elder Affairs in the Deval Patrick Administration, and Clark entered the special election to succeed him. In the campaign she emphasized her experience as an attorney and made "developing stability in state aid" her top policy issue. She won the Democratic primary in January with 65% of the vote, defeating two other Melrose Democrats. [13] [14] She defeated Republican real estate businessman Mark B. Hutchison 63 to 37 percent. [15] [16] In November 2008, she won re-election to a full term unopposed. [17]

Sworn in March 13, 2008, [18] she represented Melrose and Wakefield. She voted in favor of a sales tax increase saying "Voting for a sales tax (increase) certainly was not an easy vote, by any means, especially in this economic climate. And one of the reasons, primary reasons, I did it was for the local aid and for the MBTA. So, to have the ink barely dry on the budget, and have the MBTA coming back and asking for a fare increase to remove draconian service cuts, is something that does make me and my constituents angry." [19]

Clark's committee assignments were as follows.

When Tisei resigned his state Senate seat to run for Lieutenant Governor of Massachusetts, she ran for his senate seat. In the Democratic primary, she defeated Stoneham attorney Michael S. Day 64%-36%. [21] [22] She defeated Republican Craig Spadafora in the November 2010 general election 52%-48%. [23]

Clark was sworn in January 5, 2011. [24] She is a pro-choice legislator and has been endorsed in her state legislator campaigns by both NARAL Pro-Choice Massachusetts and the Planned Parenthood Advocacy Fund. [25] [26] [27]

In 2011 she was co-chair of the Joint Committee on Public Service, where she was lead author of the Senate version of a bill to reform municipal pensions. [28] [29] For her work in 2011, she received legislator of the year awards from the Massachusetts Municipal Association and the Massachusetts Police Association. [30] [31] In 2012 she authored a law that takes steps to ensure that all Massachusetts students are reading at grade level by third grade. [32] Also in 2012, her bill extending restraining orders in domestic violence cases to also cover victims' pets, which are often used as pawns in abusive relationships, was signed as part of a larger law on animal shelters. [33] [34] In 2013 she co-sponsored a bill expanding the state's wiretapping authority, which was strictly limited under existing law, in order to help police better investigate violent street crime. [35] At the same time, she co-sponsored a bill to secure electronic privacy protections, requiring police to have probable cause before investigating the electronic records of individuals. [36] She filed another bill tightening sex offender laws, imposing stricter penalties and making offender data more accessible to agencies and the public. [37] [38] The Women's Bar Association of Massachusetts honored Clark as their 2013 Legislator of the Year for her service on women's issues. [39]

Clark's committee assignments in the state Senate were as follows.

Clark was the Democratic nominee in the 2013 special election for the U.S. House of Representatives in Massachusetts's 5th congressional district. The district's longtime incumbent, Ed Markey, had just been elected to the United States Senate six months into his 19th term. In a heavily-contested Democratic primary—the real contest in this heavily Democratic district—she was endorsed by Massachusetts Attorney General Martha Coakley [42] and also received the endorsement of EMILY's List. [43] On October 15, 2013 she won the Democratic primary with a plurality of 32% of the vote. Her closest competitor was Middlesex County Sheriff Peter Koutoujian, who won 22% of the vote. [44] [45] On December 10, 2013, as expected, she easily won the special election. [46]

Clark was sworn into office December 12, 2013 and sits on the House Appropriations Committee. [41] In a 2014 interview with The Boston Globe, she compared the television series House of Cards to life in Washington, saying "It's exactly like here; minus the murders." [47]

Clark was unopposed in her bid for a full term in 2014.

In early March 2015, Clark decided not to attend the speech by Israeli Prime Minister Benjamin Netanyahu before a joint session of Congress. Clark said she remains committed to maintaining and strengthening what she called the special relationship between the U.S. and Israel, but noted the invitation was offered without first consulting the Obama administration, as is customary. [48]

Clark has introduced legislation in response to Internet harassment, most notably resulting from the Gamergate controversy, and she has advocated for more stringent enforcement of existing laws. [49] After introducing legislation that would criminalize " swatting" (falsely reporting an ongoing critical incident to dispatch an emergency response), she was herself targeted by a false report of an active shooter at her home. [50] [51]

In January 2017, Clark announced a ceremonial boycott of the inauguration of Donald Trump. She was one of a small group of House and Senate members who chose to boycott Trump's swearing-in ceremony. Her reasons, according to the Boston Globe, for not attending were due to her desire not to "normalize" Trump's promotion of "bigoted, misogynist, anti-Semitic, and racist claims." [52]

In May 2017, Education Secretary Betsy DeVos addressed the House Appropriations subcommittee. Clark asked DeVos: If a state private school voucher program wanted to discriminate against LGBTQ students using federal taxpayer dollars, would the Education Department step in to stand up for students and taxpayers? [53]

On November 28, 2018, it was announced that Clark had defeated California Congressman Pete Aguilar to succeed Linda Sanchez as Vice Chair of the House Democratic Caucus. [1] [2]

Clark is married to Rodney S. Dowell. He is an attorney, Founder of Law Management Innovation, LLC [56] and former executive director of the Massachusetts Lawyers Concerned for Lawyers program. [57] They live in Melrose and have three sons, Addison, Jared, and Nathaniel Dowell. [5]