Table of Contents ⇨
This article is about the ethnic group. For their language, see Inupiaq language.

The Iñupiat (or Inupiat, Iñupiaq or Inupiaq [2]; Russian: Инупиаты) are a group of Alaska Natives, whose traditional territory roughly spans northeast from Norton Sound on the Bering Sea to the northernmost part of the Canada–United States border. [3] [4] [5] [6] Their current communities include seven Alaskan villages in the North Slope Borough, affiliated with the Arctic Slope Regional Corporation; eleven villages in Northwest Arctic Borough; and sixteen villages affiliated with the Bering Straits Regional Corporation. [7]

Iñupiat (IPA:  [iɲupiɐt]), formerly Inyupik, is the plural form of the name for the people and the name of their language. The singular form is Iñupiaq (IPA:  [iɲupiɑq]), which also sometimes refers to the language. Iñupiak (IPA:  [iɲupiɐk]) is the dual form. The roots are iñuk "person" and -piaq "real", i.e., an endonym meaning "real people". [8] [9]

The Iñupiat people are made up of the following communities, 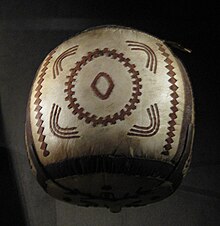 In 1971, the Alaskan Native Claims Settlement Act established thirteen Alaskan Native Regional Corporations. The purpose of the regional corporations were to create institutions in which Native Alaskans would generate venues to provide services for its members, whom were incorporated as "shareholders". [11] Alaskan Native Regional Corporations pose many challenges as participation in extractive capitalism is often in conflict with Native Alaskans subsistence lifestyles that require the health of the ecosystems. [11] Three regional corporations are located in the lands of the Iñupiat. These are the following.

Prior to colonization, Iñupiat, like all Indigenous Peoples, exercised sovereignty based on complex social structures and order. Despite the illegal transferral of land from Russia to the U.S. and eventual annexation of Alaska, Iñupiat sovereignty continues to be articulated in various ways. A limited form of this sovereignty has been recognized by Federal Indian Law, which outlines the relationship of between the federal government and American Indians. The Federal Indian Law recognized Tribal governments as having limited self-determination. In 1993, the federal government extended federal recognition to Alaskan Natives tribes. [12] Tribal governments created avenues for tribes to contract with the federal government to manage programs that directly benefit Native peoples. [12] Throughout Iñupiat lands, there are various regional and village tribal governments. The tribal governments vary in structure and services provided, but often are related to the social wellbeing of the communities. Services included but are not limited to education, housing, tribal services, and supporting healthy families and cultural connection to place and community.

Inuit, the language and the people, extend borders and dialects across the Circumpolar North. Inuit are the Native inhabitants of Northern Alaskan, Canada, and Greenland. Inuit languages have differing names depending on the region it is in spoken in. In Northern Alaskan, the Inuit language is called Iñupiat [13]. Within Alaskan Iñupiat, there are four major dialects: North Slope, Malimiut, Bering Straits, and Qawiaraq. [13] Prior to western contact, the Iñupiat dialects flourished. Due to harsh assimilation efforts in Native American boarding schools, Natives were punished for speaking their language. [7] [14] Now only 2,000 of the approximately 24,500 Iñupiat people can speak their Native tongue. [13]

Revitalization efforts have focused on Alaskan Native languages and ways of life. Located in Kotzebue, Alaska, an Iñupiat language immersion school called, Nikaitchuat Ilisagviat, was established in 1998. The immersion school's mission is to "instill the knowledge of Iñupiaq identity, dignity, respect and to cultivate a love of lifelong learning". [15] There are many courses being offered at the various campuses apart of the University of Alaska system. University of Alaska Fairbanks offers an online course called Beginning Iñupiaq Eskimo, an introductory course to the Iñupiaq language open to both speakers and non-speakers of Iñupiaq. University of Alaska Anchorage offers multiple levels of Elementary Iñupiaq Language and Alaskan Native language apprenticeship and fluency intensive courses. [16] Since 2017, a grassroots group of Iñupiat language learners organized Iḷisaqativut, a two-week Iñupiaq language intensive that is held throughout communities in the Iñupiat region. [17] The first gathering was held in Utqiaġvik ( Utqiagvik) in 2017, Siqnasuaq ( Nome) in 2018, and Qikiqtaġruk ( Kotzebue) in 2019. [18]

Along with other Inuit groups, the Iñupiaq originate from the Thule culture. Circa 300 B.C., the Thule migrated from islands in the Bering Sea to what now is Alaska.

Iñupiaq groups, in common with Inuit-speaking groups, often have a name ending in "miut," which means 'a people of'. One example is the Nunamiut, a generic term for inland Iñupiaq caribou hunters. During a period of starvation and an influenza epidemic (likely introduced by American and European whaling crews, [19]) most of these people moved to the coast or other parts of Alaska between 1890 and 1910. A number of Nunamiut returned to the mountains in the 1930s.

By 1950, most Nunamiut groups, such as the Killikmiut, had coalesced in Anaktuvuk Pass, a village in north-central Alaska. Some of the Nunamiut remained nomadic until the 1950s.

The Iditarod Trail's antecedents were the native trails of the Dena'ina and Deg Hit'an Athabaskan Indians and the Inupiaq Eskimos. [20] 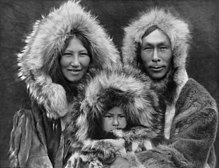 A family of Iñupiat
from Noatak, Alaska, 1929 - by Edward S. Curtis

Iñupiat people are hunter-gatherers, as are most Arctic peoples. Iñupiat people continue to rely heavily on subsistence hunting and fishing. Depending on their location, they harvest walrus, seal, whale, polar bears, caribou, and fish. [10] Both the inland ( Nunamiut) and coastal ( Taġiumiut, i.e. Tikiġaġmiut) Iñupiat depend greatly on fish. Throughout the seasons when they are available food staples also include ducks, geese, rabbits, berries, roots, and shoots.

The capture of a whale benefits each member of an Iñupiat community, as the animal is butchered and its meat and blubber are allocated according to a traditional formula. Even city-dwelling relatives, thousands of miles away, are entitled to a share of each whale killed by the hunters of their ancestral village. Maktak, which is the skin and blubber of bowhead and other whales, is rich in vitamins A and C. [21] [22] The vitamin C content of meats is destroyed by cooking, so consumption of raw meats and these vitamin-rich foods contributes to good health in a population with limited access to fruits and vegetables.

A major value within subsistence hunting is the utilization of the whole catch or animal. This is demonstrated in the utilization of the hides to turn into clothing, as seen with seal skin, moose and caribou hides, polar bear hides. Fur from rabbits, beaver, marten, otter, and squirrels are also utilized to adorn clothing for warmth. These hides and furs are used to make parkas, maklaks, hats, gloves, and slippers. Qiviut is also gathered as Muskox shed their underlayer of fur and it is spun into wool to make scarves, hats, and gloves. The use of the animal's hides and fur have kept Iñupiat warm throughout the harsh conditions of their homelands, as many of the materials provide natural waterproof or windproof qualities. Other animal parts that have been utilized are the walrus intestines that are made into dance drums and qayaq or umiaq, traditional skin boats.

The walrus tusks of ivory and the baleen of Blue whale are also utilized as Native expressions of art. The use of these sensitive materials are inline with the practice of utilizing the gifts from the animals that are subsisted. There are protective policies on the harvesting of walrus and whales. [23] The harvest of walrus solely for the use of ivory is highly looked down upon as well as prohibited by federal law with lengthy and costly punishments.

Since the 1970s, oil and other resources have been an important revenue source for the Iñupiat. The Alaska Pipeline connects the Prudhoe Bay wells with the port of Valdez in south-central Alaska. Because of the oil drilling in Alaska's arid north, however, the traditional way of whaling is coming into conflict with one of the modern world's most pressing demands: finding more oil. [24]

The Iñupiat eat a variety of berries and when mixed with tallow, make a traditional dessert. They also mix the berries with rosehips and highbush cranberries and boil them into a syrup. [25] 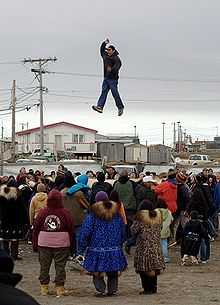 Blanket toss during a Nalukataq in Utqiagvik, Alaska

Traditionally, some Iñupiat people lived in sedentary communities, while others were nomadic. Some villages in the area have been occupied by indigenous groups for more than 10,000 years.

The Nalukataq is a spring whaling festival among Iñupiat. The festival celebrates traditional whale hunting and honors the whale's spirit as it gave its physical body to feed entire villages. The whale's spirit is honored by dance groups from across the North performing songs and dances.

The Iñupiat Ilitqusiat is a list of values that define Iñupiat people. It was created by elders in Kotzebue, Alaska, [26] yet the values resonate with and have been articulated similarly by other Iñupiat communities. [27] [28] These values include: respect for elders, hard work, hunter's success, family roles, humor, respect for nature, knowledge of family tree, respect for others, sharing, love for children, cooperation, avoid conflict, responsibility to tribe, humility, and spirituality. [26]

These values serve as guideposts of how Iñupiat are to live their lives. They inform and can be derived from Iñupiat subsistence practices.

There is one Iñupiat culture-oriented institute of higher education, Iḷisaġvik College, located in Utqiagvik.

Iñupiat people have grown more concerned in recent years that climate change is threatening their traditional lifestyle. The warming trend in the Arctic affects their lifestyle in numerous ways, for example: thinning sea ice [29] makes it more difficult to harvest bowhead whales, seals, walrus, and other traditional foods as it changes the migration patterns of marine mammals that rely on iceflows and the thinning sea ice can result in people falling through the ice; warmer winters make travel more dangerous and less predictable as more storms form; later-forming sea ice contributes to increased flooding and erosion along the coast as there is an increase in fall storms, directly imperiling many coastal villages. [30] The Inuit Circumpolar Council, a group representing indigenous peoples of the Arctic, has made the case that climate change represents a threat to their human rights. [31]

As of the 2000 U.S. Census, the Iñupiat population in the United States numbered more than 19,000. Most of them live in Alaska.