From Wikipedia
(Redirected from Interstate 90 in Indiana)
https://en.wikipedia.org/wiki/Interstate_90_in_Indiana

Table of Contents ⇨
"Interstate 90 in Indiana" redirects here. For the entire length of the highway, see Interstate 90.
‹ The template Infobox road is being considered for merging. ›

The Indiana Toll Road, officially the Indiana East–West Toll Road, [2] is a tolled freeway that runs for 156.28 miles (251.51 km) east–west across northern Indiana from the Illinois state line to the Ohio state line. It has been advertised as the "Main Street of the Midwest". [3] The entire toll road is designated as part of Interstate 90, and the segment from Lake Station east to the Ohio state line is a concurrency with Interstate 80. The toll road is owned by the Indiana Finance Authority and operated by the Indiana Toll Road Concession Company (ITRCC), which is owned by IFM Investors.

The Indiana Toll Road is part of the U.S. Interstate Highway System which runs 156.28 miles (251.51 km) through Indiana connecting the Chicago Skyway to the Ohio Turnpike. Exit points are based on the milepost system, with exits starting at 0 at the Illinois state line, and increasing to exit 153 at the Eastpoint toll barrier near the Ohio state line (technically, not an exit, as the only road accessible from there is the Ohio Turnpike, but toll tickets issued at the barrier are marked "Entry 153"). The Toll Road opened in 1956 with sequential exit numbering, which was converted to the current mileage-based scheme in 1981. The original number sequence was amended slightly in 1964 with the opening of the then-Burns Harbor, now Lake Station exit.

The farthest it gets from the Michigan state line or Lake Michigan is about 10 miles (16 km). Looking north at exit 121 ( State Road 9) allows one to see the "Welcome to Michigan" sign in the distance. At one point in northern Indiana, in Greenfield Township in LaGrange County at mile 132, the toll road comes within about 200 yards (180 m), or 0.1 miles (0.16 km), from the Michigan border. [4]

Control cities on guide signs are Chicago and Ohio. Originally they were "Chicago and West" and "Ohio and East". [5]

Longtime version of the Indiana Toll Road's logo, still in use on many guide signs on the ITR and Chicago Skyway

The Indiana Toll Road was publicly financed and constructed during the 1950s. It opened in stages, east to west, between August and November 1956. [6] The formal dedication ceremony was held on September 17, 1956. [6] [7]

The final course of the Toll Road was the northern of four planned alignments. [8] In addition to the east–west toll road, a north–south toll road was planned, roughly along the path of today's I-65, but the plan was dropped after the Federal-Aid Highway Act of 1956 was passed. [6]

Originally the I-94 designation was applied to the highway west of where the current interchange with I-94 was eventually built, with I-90 following I-80 to the west along the Borman Expressway as I-94 does now, the completed portions of the Borman being designated as I-80, I-90, and I-294. The current routing became effective around 1965, to avoid the confusion that had resulted from I-80, I-90, and I-94 all changing roadways there. As a result, a stretch of I-94 is actually farther south than I-90, and I-90 runs the entire length of the Indiana Toll Road. I-294 was also cut back to the Tri-State Tollway at that time, and thus no longer enters Indiana.

Upon taking office in 2005, Governor Mitch Daniels began looking for ways to fund a backlog of Indiana highway maintenance and construction. [10] Working with Goldman Sachs & Co., who was reported to have earned some $20 million in fees, [11] the state requested bids to lease the Toll Road in exchange for the right to maintain, operate, and collect tolls for the following 75 years.

A consortium made up of the construction firm Cintra of Spain and Macquarie Atlas Roads (MQA) of Australia, the same firms that had taken over the Chicago Skyway in 2004, submitted the winning bid of $3.8 billion. [12] Their bid was $1 billion more than the next highest bid. [10] The deal was completed on June 29, 2006, and the two companies formed the Indiana Toll Road Concession Company to operate the road.

Opponents of the proposal filed a lawsuit in St. Joseph County in late April 2006. Following roughly two weeks of arguments, Judge Michael Scopelitis ruled in favor of the State of Indiana, declaring the lawsuit brought by opponents a public lawsuit and therefore requiring the plaintiffs to post a bond of $1.9 billion for the case to proceed. The plaintiffs appealed Scopelitis' ruling to the Indiana Supreme Court, which on June 20, 2006, in a 4–0 decision, upheld Scopelitis' earlier decision, allowing the lease of the Indiana Toll Road to proceed as scheduled.

The proceeds funded a portion of the extension of I-69 through southwestern Indiana as well as a number of other highway projects throughout the state. The legislation also authorized the governor to establish a similar public-private partnership agreement for design, construction, and operation of the proposed Southern Indiana Toll Road (SITR), which would make up 117 miles (188 km) of the planned 142-mile (229 km) extension of I-69 from Indianapolis to Evansville. On November 9, 2006, Daniels announced the I-69 extension would not be tolled. In lieu of the SITR, I-69 was built using $700 million of the Major Moves payout for the section from the I-64/ I-164 interchange to Crane Naval Surface Warfare Center.[ citation needed]

Some elected officials and candidates for office in the toll road counties expressed concerns that projects in and around Indianapolis would receive too large a share of the lease proceeds to the detriment of northern Indiana. [13] Pat Bauer, a Democratic state representative from South Bend and minority leader in the Indiana House of Representatives, issued a written statement the day before funding was distributed to the counties mocking Major Moves. "Now that the deal is done, the governor and officials in his administration have traveled the state to claim that the sale has financed every major road project scheduled over the next decade," Bauer said. "The fact is that most of these projects already were on course to be completed, without any assistance from the sale of the toll road." [14]

On September 15, 2006, funds were distributed to the seven counties through which the toll road runs. [14] The list below details each county's total share in the Major Moves money. Some of the funds from each county's distribution were directed to the cities and towns within that county. [15]

In December 2006, ITR Concession Company announced that a South Bend student, Andrea Hebster, would "receive $5,000 toward her educational expenses for being selected as the grand prizewinner of the Indiana Toll Road logo design contest". The new ITRCC logo roll out occurred in early 2007. [17]

The Cintra-Macquarie consortium filed for bankruptcy in September 2014, citing lower than projected traffic volumes and revenues. [18] Democratic U.S. Senator Joe Donnelly urged Republican Governor Mike Pence to return the road to public control. However, Pence instead ordered a tender process to replace the operator, and ultimately approved the purchase of the road by IFM Partners, an Australia-based firm. [19]

Between the Westpoint barrier toll, near the Illinois state line, and the Portage barrier at milepost 24, tolls are collected in fixed-amounts at exit and entrance ramps.

Between the Portage barrier, east to the Eastpoint barrier toll, near the Ohio state line, it is operated as a closed ticket system toll road, where one receives a ticket upon entering and pays a pre-calculated amount based on distance traveled when exiting. As of July 2018, standard passenger cars are charged a toll of $8.73 for E-ZPass users and $8.70 for cash users along the section from Portage to Eastpoint, with an extra $2.39 for E-ZPass users and $2.40 for cash users at the Westpoint barrier. [20]

Originally the entire toll road was on a closed ticket system, with Westpoint at current exit 5, roughly under the East 141st Street overpass. This changed after the Indiana Department of Transportation (INDOT) takeover in 1981. Effective June 25, 2007, the Indiana Toll Road began electronic toll collection with the i-Zoom system. i-Zoom was fully compatible with the E-ZPass and I-Pass electronic toll collection systems. Indiana became the 12th state to use the E-ZPass system.

The i-Zoom brand name was retired starting in September 2012 to take advantage of the already-existing E-ZPass brand and to avert confusion with the upcoming Ohio River Bridges Project in the Louisville metro, which is managed by the Louisville-Southern Indiana Bridge Authority and uses the E-ZPass system. [21]

Like all other toll highways built in the 1950s, the Indiana Toll Road has had service areas (called travel plazas [22]) since its opening. Originally, there were eight pairs of travel plazas located approximately every 18 miles (29 km). Of these, five featured sit-down restaurants operated by Hosts International [23] while the other three had only snack bars. Each travel plaza was named after a prominent Indiana native or resident. [24] Gasoline and other auto services were available at all travel plazas. Originally, various oil companies including Standard Oil, Sinclair, Pure, Gulf, Texaco and Citgo operated each of the travel plazas. Later, Standard Oil, later Amoco and now BP, assumed operations at all travel plazas. Later BP at the travel plazas was replaced by Mobil, then Phillips 66, and currently Sunoco.

The westernmost snack bar at milepost 37.5 remained open until the mid-70s and is now used as a "Truck Only Parking" rest area [22] with no facilities. The other two at mileposts 72.9 and 108 were closed in 1972, although the one at 108 was also converted into a truck parking area without facilities. All were demolished except for one, the former Benjamin Harrison snack bar on the eastbound side at milepost 72.9. It presently serves as a state police station and has no public facilities. The restaurant interiors were remodeled into short-order cafeterias in the late 1970s when Gladieux Food Services took over operations [25] [26] and have since been remodeled once again for fast food service. However, the original buildings remain relatively unchanged from the outside.

In June 2015, Ken Daley, the new CEO of the Indiana Toll Road Concession Company, announced that all of the original 1955 travel plazas would be demolished and replaced within the next five years. [27]

As of October 2015, the Booth Tarkington service area, the easternmost in Indiana, was permanently closed. 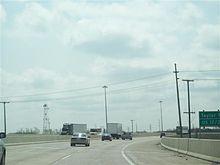 Part of the agreement to privatize operations of the Indiana Toll Road is to invest $600 million in the ITR during the first nine years of the lease. This is above and beyond the $3.8 billion being invested by the State of Indiana in Major Moves projects. More than $300 million has already been invested in improving the Indiana Toll Road. Some examples include: third-lane expansion project at $250 million; electronic toll collection (i-Zoom) at $40 million; and Toll Plaza expansions (MP 1, 23, 156) at $9 million total.

Included in the plans is adding a third lane in each direction in the most congested area of the Indiana Toll Road: from MP 10–15.5. The third-lane expansion was completed in December 2011. The 10-year Bridge Capital Improvement plan is also under way, which will repair and rehabilitate nearly every structure on the ITR over the next 10 years. The lease agreement also requires ITRCC to maintain or improve the condition of the Toll Road to standards set forth by state and federal law.