From Wikipedia
(Redirected from Interstate 57 in Illinois)
https://en.wikipedia.org/wiki/Interstate_57_in_Illinois Jump to search
Interstate mostly in Illinois

Interstate 57 (I-57) is an Interstate Highway in Missouri and Illinois that parallels the old Illinois Central rail line for much of its route. It runs from Sikeston, Missouri, at Interstate 55 to Chicago, Illinois, at Interstate 94. I-57 essentially serves as a shortcut route for travelers headed between the south (Memphis, New Orleans, etc.) and Chicago, bypassing St. Louis, Missouri. Between the junction of I-55 and I-57 in Sikeston, Missouri and the junction of I-55 and I-90/94 in Chicago, I-55 travels for 436 miles (702 km), while the combination of I-57 and I-94 is only 396 miles (637 km) long between the same two points. In fact, both the control cities on the overhead signs, as well as destination mileage signs, reference Memphis, Tennessee along southbound I-57, even as far north as its northern origin at I-94 in Chicago. Likewise, at its southern end, Chicago is the control city listed for I-57 on signs on northbound I-55 south of Sikeston, Missouri, even though I-55 also goes to Chicago. [2]

As of 2015 [update], I-57 has no spur routes, nor are any planned for the near future. At a length of just over 386 miles (621 km), it is the second longest two-digit Interstate Highway without an auxiliary route, behind I-49. I-57 has one business loop in Charleston, Missouri. 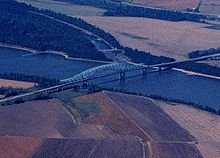 Cairo I-57 bridge between Missouri and Illinois

In the state of Missouri, Interstate 57 runs northbound from Sikeston to the Cairo I-57 Bridge over the Mississippi River north of Cairo, Illinois.

After ending southbound at Interstate 55, the highway continues as U.S. Route 60, which meets U.S. Route 67 at Poplar Bluff, Missouri, and from there U.S. Route 67 goes south to Little Rock, Arkansas.

In the state of Illinois, Interstate 57 runs from the bridge over the Mississippi River north to Chicago. I-57 is the longest Interstate Highway in Illinois. Its route follows essentially the earlier route of US 51 in southernmost Illinois (US 51 has been diverted to I-57 where I-57 has always been close to old US 51 between Future City and Dongola) before taking a northeastward diagonal to Illinois 37, which remains intact as a town-to-town through route, past its interchange with Interstate 24 (the northwestern terminus of Interstate 24) near Pulleys Mill and a short duplex with Interstate 64 near Mount Vernon north to Effingham, where it has a short concurrence with Interstate 70. It then follows US 45 bypassing Champaign (where it meets Interstates 72 and 74), and heads north to Onarga whereafter it follows the formerly duplex path of US 45 and (now decommissioned in most of Illinois) old US 54 to Kankakee. At Kankakee it heads northward largely parallel to the now decommissioned route of old US 54 (since renumbered largely as Illinois 50) into the Chicago area, meeting Interstate 80 in Hazel Crest, Interstate 294 in Blue Island, and feeding Interstate 94 on Chicago's South Side.

I-57 remains the only Chicago expressway that does not have a commonly used name. Its Chicago-area portion was formerly known as the Dan Ryan Expressway–West Leg. I-57 was named the Ken Gray Expressway in southern Illinois after former U.S. Congressman Ken Gray (West Frankfort) for his work on getting the route planned through southern Illinois. A 20-mile (32 km) segment from Wentworth to Sauk Trail has been designated the Tuskegee Airmen Memorial Trail [3] but this is not intended as a navigational name.

The oldest segment of I-57 is a 6.2-mile (10.0 km) strip running east of Bradley to Kankakee labeled on the 1959 Illinois state highway map. [4] Two years later, a 30-mile (48 km) stretch of I-57 from Dongola north to Marion, Illinois opened on September 26, 1961. [5][ self-published source] Another portion between the IL 121/ US 45 exit and the Watson–Mason exit was completed and opened prior to July 1965, linking I-57 to I-70, and running in tandem with I-70 for several miles, with access to Indianapolis to the east, and St. Louis to the west.[ citation needed] A 21.5-mile (34.6 km) section of I-57 in Jefferson County from Bonnie (using a temporary road that is still partially visible from the northbound lanes) to IL 161 later opened on December 9, 1969. [6] The portion of I-57 in Chicago (known as the Dan Ryan West Leg Extension) was constructed and opened in segments between 1963 and 1970. It remains the most recent Interstate Highway to be established within the city. [5] The final section of I-57 in Illinois opened in December 1971 at Paxton. [7]

The portion of I-43 from Milwaukee to Green Bay was originally numbered as Interstate 57. [8] The number was changed due to the existence of I-57 in Illinois. [9]

For many years, an interchange at the junction of I-57 with I-294 did not exist. It was one of the few places in the US where Interstates cross, but have no interchange. IDOT and ISTHA opened Phase 1 of a new interchange in 2014, providing access from I-57 north to I-294 north and from I-294 south to I-57 south. [11] Phase Two will complete the remaining movements in 2022. [12]

I-57 is slated to eventually be extended west along US 60 to Poplar Bluff, Missouri, and then south along the US 67 corridor to North Little Rock, ending at I-40. In April 2016, a provision designating US 67 from North Little Rock to Walnut Ridge, Arkansas, as "Future I-57" was added into the federal fiscal year 2017 Transportation, Housing and Urban Development funding bill, and officially became law in 2017. [13]

Missouri has already upgraded 62 miles (100 km) of the US 60/67 corridor between Sikeston and Route 158 near Harviell to a mixture of freeway and expressway segments. All at-grade crossings along the corridor would have to be eliminated before the Interstate designation could be applied. [14] A new freeway segment from Route 158 to just south of Neelyville near County Road 274 (about 2 miles (3.2 km) north of the Arkansas border) has been announced as part of a cost share program and is in the planning stages. [15] [16]