The majority of I-440 is located below the street level of adjoining streets and roads, in an artificially-cut gulch. It has three lanes in each direction, separated by a narrow grassy median, which makes it susceptible to crossover crashes. [2] Most of the route is also landscaped, and shares engineering similarities to that of a parkway, such as curbed inner edges. The entire route is made of concrete. [3]

West of downtown Nashville, I-440 heads south from I-40 and goes on to meet U.S. Route 70S (US 70S) before turning due east. I-440 then has an interchange with US 431. Then, it has an interchange with I-65 south of downtown Nashville in a symmetrical " Spaghetti Junction" stack interchange, which includes four flyover ramps. I-440 then turns northeast and meets US 31A/ US 41A before terminating at I-24, west of the Nashville International Airport. I-40 eastbound is also directly accessible from this interchange, as is westbound I-440 from I-40 westbound. [4] 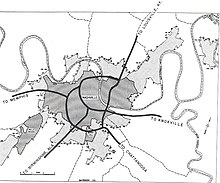 The route that is now Interstate 440 had its origins in 1955, when the interstate highway system was being planned. After the Interstate Highway Act was passed, a public meeting was held in 1957 that identified proposed interstate highways and bypass routes around the city, and I-440 was initially known as State Route 516 (SR 516). [5]

The project experienced many setbacks, and was subject to much controversy. [3] TDOT was authorized to make right-of-way acquisitions for the first section, located between I-40 and I-65 in 1961 and the next section, between I-65 and I-24, in 1968. [6] Around that time a lawsuit was filed against the department, alleging that they had purchased right-of-way for an unplanned interchange. TDOT won the lawsuit after they showed that the project was in the public interest. [2]

The construction of the parkway required the demolition of many homes, and many Nashville residents opposed the project. Throughout the 1970s many groups campaigned to stop the construction of the highway. But traffic studies determined that the highway was necessary to relieve congestion on I-40. [5] In 1981 a group of community activists known as the "Nashvillians Against I-440" filed Nashvillians Against I-440 v. Lewis in a U.S. District Court hoping to stop construction of the interstate. The lawsuit was dismissed when a judge ruled that the project would not adversely affect the natural environment and that TDOT had followed all necessary procedures. [6] A lawsuit was also filed by the National Wildlife Federation in 1973 requiring an Environmental impact study after the state determined that the project met federal guidelines exempting it from an EIS. [5]

Construction began in early 1982. The project required the removal of hundreds of thousands of cubic feet of dirt and rock. [3] Initially, the parkway was going to be at-grade, but TDOT engineers chose to build it below the surface of the ground to reduce noise and vehicle emissions pollution after citizens in large cities living near interstates had complained of disturbances caused by highway traffic. [2] The state also agreed to take measures to reduce the impact of the interstate as a further compromise to opposition by such means as beautification, which is the origins of the highway's "parkway" designation, and banning truck traffic. This ban was blocked by a federal court in 1988 after being challenged by multiple trucking organizations. [7] Engineers chose to construct the highway with concrete rather than asphalt so it would last longer. [5]

I-440 was built with a design capacity of 64,000 vehicles a day. By 2008, the average annual daily traffic (AADT) was 106,219 vehicles. [8] The highway experiences back-ups every day during rush hour. [5] By the 2000s, the highway had begun to develop cracks and potholes, and in 2009 TDOT spent $8 million to rehabilitate the roadway. This included cutting grooves parallel to traffic flow in the lanes to improve traction after the overuse of the roadway had smoothened the surface, causing a susceptibility of vehicles to hydroplane. The highway continued to develop potholes afterwards, and prompted citizens to push for reconstruction of the entire parkway. [2]

After the Tennessee General Assembly passed the IMPROVE Act in 2017, which increased the state's fuel taxes and vehicle registration fees with the intent of funding a backlog of 962 needed transportation projects, TDOT announced that an upgrade of I-440 was a top priority. [9] In November 2017 plans were announced for reconstruction of the route, which will include replacing the concrete with asphalt, widening the route to eight lanes in most places, and replacing the grass median with a median barrier. [10] The contract for reconstruction was awarded on August 1, 2018 at a cost of $152.9 million. [11] Preliminary work began in late November 2018, and the reconstruction project began in March 2019. [12] [13]

The entire route is in Davidson County.