The genus name Phrynosoma means "toad-bodied". In common with large true frogs and toads, horned lizards tend to move sluggishly, making them easy to catch; this may also avoid triggering attacks by predators. They are adapted to arid or semi-arid areas. The spines on the lizard's back and sides are made from modified reptile scales which prevent the water loss through the skin, whereas the horns on the head are true horns (i.e. they have a bony core). Of the 22 species of horned lizards, 15 are native to the United States. The largest-bodied and most widely distributed of the US species is the Texas horned lizard.

Horned lizards use a wide variety of means to avoid predation. Their coloration generally serves as camouflage. When threatened, their first defense is to remain still to avoid detection. If approached too closely, they generally run in short bursts and stop abruptly to confuse the predator's visual acuity. If this fails, they puff up their bodies to cause them to appear more horned and larger, so that they are more difficult to swallow. [1]

At least eight species (P. asio, P. cornutum, P. coronatum, P. ditmarsi, P. hernandesi, P. orbiculare, P. solare, and P. taurus) are also able to squirt an aimed stream of blood from the corners of the eyes for a distance of up to 5 feet (1.5 m). [2] [3] [4] [5] They do this by restricting the blood flow leaving the head, thereby increasing blood pressure and rupturing tiny vessels around the eyelids. The blood not only confuses predators, but also tastes foul to canine and feline predators. It appears to have no effect against predatory birds. Only three closely related species (P. mcallii, P. modestum, and P. platyrhinos) are certainly known to be unable to squirt blood. [3]

While previous thought held that compounds were added to the blood from glands in the ocular sinus cavity, current research has shown that the chemical compounds that make up the defense are already in the circulating blood. [3] [4] It is possible that their diet of large quantities of venomous harvester ants could be a factor; however, the origin and structure of the chemicals responsible are still unknown. The blood-squirting mechanism increases survival after contact with canine predators; [4] therefore, it is probable that, while unorthodox, the trait could have provided an evolutionary advantage. Ocular autohemorrhaging has also been documented in other lizards, [6] which suggests blood-squirting could have evolved from a less extreme defense in the ancestral branch of the genus. Recent phylogenic research supports this claim, so it appears as though the species incapable of squirting blood have lost the adaptation for reasons yet unstudied. [7]

To avoid being picked up by the head or neck, a horned lizard ducks or elevates its head and orients its cranial horns straight up, or back. If a predator tries to take it by the body, the lizard drives that side of its body down into the ground so the predator cannot easily get its lower jaw underneath.[ citation needed]

A University of Texas publication notes that horned lizard populations continue to disappear throughout the southwest despite protective legislation. The Texas horned lizard has disappeared from almost half of its geographic range. Population declines are attributed to loss of habitat, human eradication of the ant populations upon which the lizards prey, displacement of native ant populations by invading fire ants (aided by synergistic effects of native ant eradication), and predation by domestic dogs and cats. [8]

In 2014, the Center for Biological Diversity in Tucson, Arizona petitioned the Oklahoma Department of Wildlife Conservation to have the Texas horned lizard put on the endangered species list due to the massive declines of its population in Oklahoma, where it was once plentiful. The Center said it may later seek protection for the animal on a Federal level; it also said that reptiles in general are dying off at up to 10,000 times their historic extinction rate, greatly due to human influences. [9] 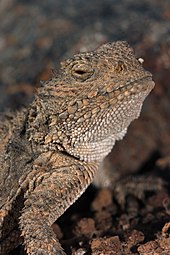 The following 22 species are recognized as being valid, three species of which have recognized subspecies. [10] 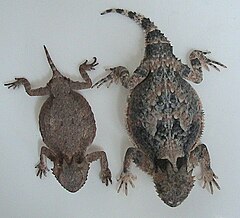 The genus of horned lizards is the official state reptile of Wyoming. [11]

The TCU mascot is commonly known as Super frog to TCU fans and students. He is usually present at TCU sporting events.

Texas designated the Texas horned lizard (Phrynosoma cornutum) as the official state reptile in 1993 [12] and the " TCU Horned Frog" is the mascot of Texas Christian University in Fort Worth, Texas. TCU is the only known athletic team with the horned lizard as a mascot.