Hooksett is a town in Merrimack County, New Hampshire, United States. The population was 13,451 at the 2010 census [1] and an estimated 14,175 in 2017. [2] The town is located between Manchester, the state's largest city, and Concord, the state capital. A prominent landmark is Robie's Country Store, a National Historic Landmark and a frequent stop for presidential candidates during the New Hampshire primary. [3]

Hooksett was incorporated in 1822. First known as "Chester Woods" and "Rowe's Corner", the community was called "Hooksett" for nearly fifty years before being incorporated. The name may have come from a hook-shaped island in the Merrimack or from early fishermen, who called the area "Hookline Falls". Rocky ledges flank the Merrimack River, and there were several cross-river ferries located here, as well as lumber mills and a brick-making establishment powered by the falls. The first census, taken in 1830, reported 880 residents.[ citation needed]

The first settlement in the area was Martins Ferry near the Merrimack River and what is today's Southern New Hampshire University. The name comes from the Martin family who owned the ferry and the land around the area for decades.[ citation needed] Today, Martin's Corner 1 mile (1.6 km) to the east bears the name. In 1794, the lottery-funded Hooksett Canal became part of the transportation facilities of the Amoskeag cotton mills in Manchester. 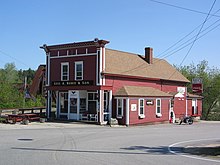 Hooksett is part of School Administrative Unit 15, along with the neighboring towns of Auburn and Candia. SAU-15 administers five schools, three within Hooksett: [9]