Highland Park is a city in Wayne County in the State of Michigan, within Metro Detroit. The population was 11,776 at the 2010 census. The city is completely surrounded by Detroit except for a small portion that touches the city of Hamtramck, which is also surrounded by Detroit. 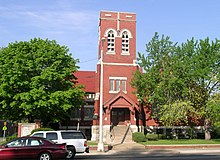 The area that was to become Highland Park began as a small farming community, on a large ridge at what is now Woodward Avenue and Highland, six miles (9.7 km) north of Detroit. In 1818, prominent Detroit judge Augustus B. Woodward bought the ridge, and platted the village of Woodwardville in 1825. The development of the village failed. Another Detroit judge, Benjamin F. H. Witherell, son of Michigan Supreme Court justice James Witherell, attempted to found a village platted as Cassandra on this site in 1836, but this plan also failed. [5]

In 1907, Henry Ford purchased 160 acres (65 ha) just north of Manchester Street between Woodward Avenue and Oakland Street to build an automobile plant. Construction of the Highland Park Ford Plant was completed in 1909, and the area's population dramatically increased in 1913, when Henry Ford opened the plant's first assembly line. The village of Highland Park was incorporated as a city in 1918 [7] to protect its tax base, including its successful Ford plant, from Detroit's expanding boundaries.

In 1910, Highland Park, then a village, had 4,120 residents. Between 1910 and 1920 during the boom associated with the automobile industry, Highland Park's population grew to about 46,500, an increase of 1,081 percent. The growth of Highland Park and neighboring Hamtramck broke records for increases of population; both municipalities withstood annexation efforts from Detroit. [8] In 1925, Chrysler Corporation was founded in Highland Park. It purchased the city's Brush- Maxwell plant, which would eventually expand to 150 acres and serve as the site of the company's headquarters for the next 70 years. [5]

Arthur Lupp of Highland Park founded the Michigan branch of the Black Legion in 1931; it was a secret vigilante group related to the Ku Klux Klan, which had been prominent in Detroit in the 1920s. The Legion had a similar nativist bent and its members were opposed to immigrants, Catholics, Jews, blacks, labor organizers, etc. Many public and business officials of Highland Park, including the chief of police, a mayor, and a city councilman, joined this group. Lupp and others were among the 48 men indicted and convicted following the murder of Charles Poole in May 1936; eleven were convicted in that murder. Investigations revealed the Legion had been involved in many other murders or conspiracies to murder during the previous three years, for which another 37 men were convicted. [9] [10] These convictions ended the reign of the Legion.

In 1944, the Davison Freeway was opened as the country's first modern depressed urban freeway, running through the center of the city. [11] It was completely reconstructed and widened in 1996 and 1997 to improve its safety. [12]

Ford Motor Company wound down operations at its Highland Park plant in the late 1950s. With the loss of industrial jobs, the city suffered many of the same difficulties as Detroit: declines in population and tax base accompanied by an increase in street crime. White flight from the city accelerated after the 1967 Detroit 12th Street Riot. Ford's last operation at the factory, the production of tractors at its Model T plant, was discontinued in 1973, and a year later the entire property was sold to a private developer for general industrial usage. [5] The city population was majority black and impoverished by the 1980s. Chrysler, the city's last major private sector employer, moved its corporate headquarters from Highland Park to Auburn Hills between 1991 and 1993, paying the city $44 million in compensation. [5] The move dislocated a total of 6,000 jobs over this period. [5]

Known as "The City of Trees," [13] the town was thickly forested until the 1970s. The spread of Dutch elm disease required many old trees to be cut down.[ citation needed]

In August 2011, more than two-thirds of the streetlights in Highland Park were removed by the city, due to an inability to pay a $60,000 per month electric bill. [15] The street lights were not only turned off, but decommissioned, or removed from their posts. The city advised residents to keep porch lights on to deter crime. [16]

On November 20, 2013, the Detroit Water and Sewerage Department filed a lawsuit against the City of Highland Park regarding unpaid sewage services and water totaling $17.7 million. [17]

Highland Park is approximately 6 miles (10 km) north-northwest from Downtown Detroit. It is bounded by McNichols Road (6 Mile Road) to the north, Grand Trunk Western Railroad Holly Subdivision tracks to the east, the alleys of Tuxedo and Tennyson streets to the south, and the Lodge Freeway and Thompson Street to the west.

There were 4,645 households, of which 28.8% had children under the age of 18 living with them, 13.0% were married couples living together, 32.3% had a female householder with no husband present, 6.5% had a male householder with no wife present, and 48.2% were non-families. 43.4% of all households were made up of individuals and 16.1% had someone living alone who was 65 years of age or older. The average household size was 2.36 and the average family size was 3.30.

Highland Park has the highest percent of single people, 87%, of any city in Michigan. [21]

Highland Park is governed under the council-mayor form of government wherein an elected mayor is the chief executive officer of the city, and the council its legislative body. The mayor appoints city officers such as the city attorney, the director of community and economic development, finance director, and the water department director, though, the council has the power to refuse or accept the appointments. The city council consists of five members elected at large who serve terms of four years. The highest vote getter becomes council president for that term. [23] The city levies an income tax of 2 percent on residents and 1 percent on nonresidents. [24]

The Highland Park Police Department originally worked out of a building built in 1917 along Gerald Street.[ citation needed] Its administrative offices are now in the Robert Blackwell Municipal Building, [29] and the patrol station is in a mini-station in the Model-T Plaza strip mall. [16] [29] It has occupied that facility since 2007. The jail facility there is a makeshift chain-link cage. [16] The police department has a business liaison office in the Woodward Place Plaza. [29] From 2001 to 2007 the municipal police department was inactive, with policing done by the Wayne County Sheriff's Department. [16] The police department reopened on July 1, 2007. [29]

The Highland Park Fire Department (HPFD) was established in 1917, and housed in a station built on Gerald Street. [30] Deemed uninhabitable in 2005, the department was moved to a temporary location in a warehouse on Oakland Avenue near the Davison Freeway. Using a $2.7 million Federal Emergency Management Agency grant made available by the American Recovery and Reinvestment Act, a new station facility was opened across the street from the original station on September 3, 2013. [31]

The US Postal Service operates the Highland Park Post Office at 13215 Woodward Avenue. [32]

The gear-reduction starter Chrysler used from the early 1960s through the late 1980s garnered the nickname "Highland Park Hummingbird" after Chrysler's hometown and the starter's distinctive cranking sound.

Despite Chrysler's departure, the city remains associated with Chrysler in the minds of auto enthusiasts.[ citation needed]

George Washington Carver Academy is a K-8 charter school that was authorized by Highland Park Schools. The school's 2008 mathematics and English standardized test scores for 4th grade students were invalidated after cheating had been discovered. [40] In 2013 the school participated in the "Students for Peace" competition in order to reduce the amount of fighting on campus; in 2012 91% of the students had received suspensions because they participated in fighting. [41] In 2016 it had 560 students, and it is managed by Midwest Management Group. That year it changed its authorizer to Bay Mills Community College out of concern that the Highland Park school district may collapse. [42]

In 1918 Katherine and Tracy McGregor, wealthy individuals, deeded the property of a facility for "homeless, crippled, and backward children." [49] The McGregor Public Library opened on that site in 1924. [50] The library closed in 2002. Around 2007 the city began efforts to re-open the library. [51] However, little action has taken place to re-open the building.

The Ernest T. Ford Recreation Center serves as a recreation center for the community. The center has a basketball court, exercise equipment, pool tables, table games, and televisions. After a renovation, it re-opened in February 2008. [52] In 1993 Highland Park Community College won the MCCAA Division 1 Men's Basketball Championship against Macomb Community College.