Hancock County is a county located in the northeastern part of the U.S. state of Tennessee. As of the 2010 census, the population was 6,819, [2] making it the fourth-least populous county in Tennessee. Its county seat is Sneedville. [3]

Hancock County was created from parts of Hawkins and Claiborne counties. The act establishing the county was passed by the state legislature in 1844, but several Hawkins residents sued to block its creation. In 1848, the Tennessee Supreme Court ruled in favor of the new county. The county seat, Sneedville, was named in honor of the attorney William H. Sneed, who represented the county in the court case. The county was named after the Revolutionary War patriot John Hancock. [1] [4]

Major Routes Throughout the County 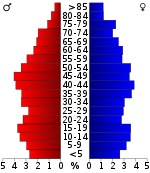 Hancock County is known particularly for its population of people of Melungeon ancestry, who are believed to be of mixed European, African, and Native American heritage. The Vardy Community School, which provided state-mandated education for Melungeon children in the early 20th century, is now a historic site located in the Newman's Ridge area.

Like all of Unionist East Tennessee, Hancock County has been overwhelmingly Republican since the Civil War. Since the Republican Party first contested the state in 1868, every official Republican nominee has gained an absolute majority of Hancock County’s vote, even William Howard Taft during 1912 when the GOP was bitterly divided. The only post-Civil War Democratic Presidential nominee to even reach forty percent of Hancock County’s vote has been Bill Clinton in 1992, when he was aided by the local popularity of Tennessee Senator Al Gore, whose native home is in Smith County, Tennessee.