From Wikipedia
https://en.wikipedia.org/wiki/Hamilton_County,_Tennessee Jump to search
U.S. county in Tennessee

Hamilton County was formed on October 25, 1819 from portions of Rhea County and Cherokee Nation land. It was named after Alexander Hamilton, [6] an officer in the American Revolutionary War, member of the Continental Congress, the first US Secretary of Treasury, and one of the founding fathers of the United States.

The area was originally occupied by Cherokee Nation under the leadership of John Ross. What is now known as Chattanooga was formerly Ross's Landing, a busy trade post recognized as the center of the Cherokee Nation. Over a series of Treaties between 1819 and 1835, The Cherokee had been mostly moved out of the area. If any Cherokee wished to stay in the area, the head of the family would have to become a citizen of the United States. Once a citizen, they would be entitled to 640 Acres of land. At the time of death, heirs would be entitled to the land. of the 107 reservations reported to Congress in 1819, only 39 were listed as Fee Simple. The other 68 reservations were allowed to stay as long as the family stayed on the land. Once the family moved, the land could be sold. This made it easier to remove the Cherokee from the area. The treaty of Echota in 1835 providing the US government legal basis for the forced removal of the Cherokee, opening the land for settlement. [7] [8]

At time of the 1820 census, the County counted 821 residents, including 16 blacks, 39 slaves, and about 100 Cherokee living on 6 reservations. The original legislature says that John Gamble, William Lauderdale, and John Patterson, the 3 men who were responsible for founding the County, would conduct all county business The original County seat location was in the home of Hasten Poe, a popular tavern located near the 3 men. In 1822 the County Court was moved to the farm of Ashael Rawlings, the newly appointed County Clerk, in Dallas, TN. The town of Dallas died after the County seat had been moved later. the seat was moved to Harrison, TN and then later moved to Chattanooga in 1835. [7] [8]

Hamilton County was the site of an important saltpeter mine during the Civil War. Saltpeter is the main ingredient of gunpowder and was obtained by leaching the earth from caves. Lookout Mountain Cave was a major source of saltpeter during the Civil War. The mine was operated by Robert Cravens, who owned the property where the cave is located. In May 1861, Cravens contracted with the Tennessee Military and Financial Board to deliver 20,000 pounds of saltpeter. On the 24th of the same month, he reported that he had ten hoppers already set up in his cave. Cravens was also mining Nickajack Cave in nearby Marion County. In 1862 he quit mining at Lookout Mountain Cave and rented the cave to the Confederate Nitre and Mining Bureau, which mined the cave from June 1862 through July 1863. Mining ceased when Chattanooga was occupied by Federal forces in 1863. [9]

In 1919 James County, Tennessee went bankrupt and became a part of Hamilton County in April 1919. [10] James County had been established by the Tennessee General Assembly in January 1871 and was named after Reverend Jesse J. James. [10] As of the 2017 census, Hamilton county is the fourth most populated county in the state with a population of 361,613. The growth rate is 1% per year over the last five years. Hamilton county has census records dating back to the 1830s. The average income of Hamilton County Tennessee is $26,560. [11]

Raccoon Mountain Caverns is a show cave located 8 miles northwest of downtown Chattanooga. It was originally explored in 1929 by Leo Lambert who developed trails and installed lights and opened the cave to the public on June 28, 1931. The cave was opened under the name Tennessee Caverns. The operators of the cave claim that its explored length is over 5.5 miles.

The Crystal Caverns Cave Spider, Nesticus furtivus, is only known from this one cave. Cave guides will occasionally spot one of these rare spiders and point it out to the tourists. [14]

Hamilton County has a County Mayor and nine districts, each of which elect a Commissioner to serve on the county's legislative County Commission.

The citizens of Hamilton County elect the mayor every four years. The incumbent Hamilton County Mayor is Jim Coppinger, who has served since 2011. [16] Prior to his service as mayor, Coppinger served as Fire Chief as a County Commissioner.[ citation needed]

The Mayor serves as the head of the county's executive branch and as the county's Chief Fiscal Officer. He/she oversees the budget preparation process and administers the budget and financial reports. He/she also oversees the day-to-day operations of county government, including implementation of all laws and policies. The Mayor also gives the County Commission recommendations and keeps them up to date about the county's financial condition. [16]

The current Chief of Staff is Michael Compton. [17]

The Chief of Staff is appointed by the Mayor and is responsible for overseeing and coordinating all areas of county general government, and coordinating specific initiatives. He/she also serves as a point of contact for the County Commission and other elected officials. The office's main purpose is to assist the County Mayor carry out his initiatives in an efficient and effective manner. [17]

The County Trustee is elected to act as the county government's treasurer. He or she collects county property taxes, accounts for money regularly, and invest temporarily idle county funds. The current County Trustee is Bill Hullander. [21]

County Board of Commissioners

The incumbent County Commissioners are:

All Court Clerks are elected by the citizens of Hamilton County.

The Office of District Attorney General serves to prosecute all individuals who violate the criminal law in Hamilton County, which is made up of the 11th Judicial District of Tennessee. The office also prosecutes all felony, state misdemeanor, and juvenile delinquency cases brought before the Hamilton County Juvenile Court. It represents crime victims in victim compensation hearings and maintains and supervises the Victim Witness Assistance Program. [24]

The current District Attorney is Neal Pinkston, having been elected to an 8-year term in 2014. [25]

The Clerk and Master handles fees and paperwork associated with the court and sometimes serves as a chancellor. [24]

The Criminal Court handles both felony and misdemeanor cases. Cases are brought to the criminal court after a grand jury issues an indictment, or after an appeal is granted from a lower court. Trials in this court are typically have juries, however, a judge may hear a case without a jury. [24] The current Criminal Court Judges are Barry Steelman, Tom Greenholtz, and Don Poole. [29]

The General Sessions Court is composed of two divisions: Civil and Criminal. The Civil Division has limited jurisdiction with no jury trials. A person may represent her/himself without an attorney. The Criminal Division only issues judgments for misdemeanor criminal cases and traffic offenses. It only has jurisdiction for felony cases on a preliminary hearing basis to determine if there is sufficient cause for the case to be bound over to the Grand Jury. There are generally no juries in this division, either. [24]

The Juvenile Court handles all cases which involve a minor. Children are referred to the Juvenile Court for reasons of delinquency, status offenses, and dependency and neglect issues. [24] The current Juvenile Court Judge is Robert Philyaw. He is supported in his work by magistrates that serve in the court. They are Bruce Owens, Troy McDougal, and Chris Gott in the Juvenile Court and Kathy Clark, Autry Jones, and Marsha Smith in the Child Support division. [31]

Hamilton County has an elected Sheriff. Recent past sheriffs: [33] 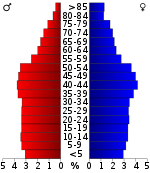 Politically, Hamilton County is conservative. Along with the rest of East Tennessee, it has been supportive of the Republican party since the Civil War, even as the rest of the Solid South voted staunchly Democratic. [43] However, unlike most counties in East Tennessee, Hamilton County is a strong two party county, with the Democratic candidate usually receiving at least 40% of the popular vote in presidential elections, and the city of Chattanooga tending to lean slightly Democratic. In 2004, Republican George Bush defeated Democrat John Kerry 57% to 41%. [44] The last Democrat to win the county was Harry S. Truman in 1948, although George Wallace did win a plurality in 1968. [45]

In 2008, Republican John McCain defeated Democrat Barack Obama by a slightly smaller margin of 55% to 43%. [46] In 2012, Republican Mitt Romney defeated incumbent Obama by a margin of 56% to 42%. [47] Four years later in 2016, in businessman Donald Trump's sweep of Appalachia, Hamilton County furnished the GOP with a mildly increased margin of 55% to 39% for Secretary of State Hillary Clinton. [48]