Table of Contents ⇨
Not to be confused with Hamilton, Ohio.
County in Ohio

Hamilton County is a county in the southwest corner of the U.S. state of Ohio. As of the 2010 census, the population was 802,374. [2] making it the third-most populous county in Ohio. The county seat and largest city is Cincinnati. [3] The county is named for the first Secretary of the Treasury, Alexander Hamilton. [4] Hamilton County is part of the Cincinnati-Middletown, OH-KY-IN Metropolitan Statistical Area.

The southern portion of Hamilton County was originally owned and surveyed by John Cleves Symmes, and the region was a part of the Symmes Purchase. The first settlers rafted down the Ohio River in 1788 following the American Revolutionary War. They established the towns of Losantiville (later Cincinnati), North Bend, and Columbia.

Hamilton County was organized in 1790 by order of Arthur St. Clair, governor of the Northwest Territory, as the second county in the Northwest Territory. Cincinnati was named as the seat. Residents named the county in honor of Alexander Hamilton, who was the first Secretary of the Treasury of the United States and a founder of the Federalist Party. Its original boundaries were those defined for the Symmes purchase contract in 1788: [5] the Ohio River in the South, Great Miami River to the west, the Lesser Miami River to the east, and the Cayuhoga River to the North. Its area then included about one-eighth of Ohio, and had about 2,000 inhabitants (not including the remaining Native Americans). The county was greatly expanded in 1792 to include what is today the lower peninsula of Michigan. Since 1796, other counties were created from Hamilton, reducing the county to its present size.

The county was the location of much of the Northwest Indian War both before and after its organization.

The United States forcibly removed most of the Shawnee and other Indian peoples to move to locations west of the Mississippi River in the 1820s. Rapid growth occurred during the 1830s and 1840s as the area attracted many German and Irish immigrants, especially after the Great Famine in Ireland and the revolutions in Germany in 1848.

During the Civil War, Morgan's Raid (a Confederate cavalry campaign from Kentucky) passed through the northern part of the county during the summer of 1863. 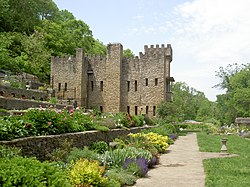 Cincinnati, Ohio viewed from the SW, across the Ohio River, in Kentucky.

The county lies in a region of gentle hills formed by the slopes of the Ohio River valley and its tributaries. The Great Miami River, the Little Miami River, and the Mill Creek also contribute to this system of hillsides and valleys. No naturally occurring lakes exist, but three major manmade lakes are part of the Great Parks of Hamilton County. [7] The largest lake by far is Winton Woods Lake, covering 188 surface acres, followed by Miami Whitewater Lake, covering 85 surface acres, and Sharon Lake, covering 36 surface acres.

The county boundaries include the lowest point in Ohio, in Miami Township, where the Ohio River flows out of Ohio and into Indiana. This is the upper pool elevation behind the Markland Dam, 455 feet (139 m) above sea level. [8]

The highest land elevation in Hamilton County is the Rumpke Sanitary Landfill at 1,045 feet (319 m) above sea level in Colerain Township. 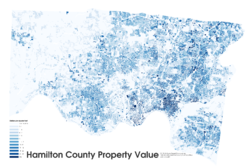 As of 2020, the members of the Hamilton Board of County Commissioners are Denise Driehaus, Stephanie Summerow Dumas, and Victoria Parks. [19] [20]

Since 1963, the Board has employed an administrator to run the day-to-day operations of the county; the current administrator is Jeffrey Aluotto. Other elected officers include Dusty Rhodes (Auditor), Joe Deters (Prosecutor), Jim Neil (Sheriff), Theodore B. Hubbard, (Engineer), Norbert Nadel (Recorder), Robert A. Goering (Treasurer), and Lakshmi Sammarco (Coroner).

Hamilton County has typically elected Republican candidates in national elections, but has trended Democratic in recent years. In 2008, Barack Obama was the first Democratic presidential candidate to win the county since 1964. The county continued to lean Democratic, voting for Obama again in 2012 and for Democratic candidate Hillary Clinton in 2016. In fact, it was one of the few counties in Ohio to swing toward the Democrats in 2016 even as the state as a whole had swung toward the Republicans. In the 2018 midterm elections, with the election of Democrat Stephanie Summerow Dumas, the Hamilton County Board of Commissioners was completely under Democratic control for the first time ever. [22] They had previously regained a 2/3rds majority control of the Board of Commissioners in 2016 with the election of Denise Driehaus. In 2019, longtime Democratic Commissioner Todd Portune announced his resignation from the Board due to health problems. Portune's Chief of Staff, Victoria Parks, was appointed to serve the remainder of his term (through the November 2020 general election). With Parks' appointment, the Board of Commissioners became for the first time all-female and majority black. [19]

Due to its tight races and its position in the swing state of Ohio, Hamilton County is regarded as a crucial county to win in presidential elections. In 2012, The Washington Post named Hamilton as one of the seven most important counties in the country for that year's election. [23] Time characterized Hamilton County's political scene as "a battle between conservative suburbs and a Democratic urban center, though Cincinnati is one of the most conservative metro areas in the Midwest." [24]

The University of Cincinnati was founded in 1819; The Engineering Research Center, designed by UC Alumnus Michael Graves, was designed to look like a 4-cylinder engine.

Miami Whitewater Forest was the second park to join the Great Parks of Hamilton County in 1949; it now spans 4,279 acres.

Public elementary and secondary education is provided by 21 school districts: [26]

In 2016, Cincinnati Public Schools had 35,000 students, 63% of which were African-American. [27] The county also has a vocational school district, the Great Oaks Institute of Technology and Career Development. Parochial schools of various denominations add to this base. Among these the Roman Catholic Archdiocese of Cincinnati maintains a system of 108 elementary and 22 secondary schools, the ninth largest private system in the United States.

The county, in cooperation with the City of Cincinnati, operates the Public Library of Cincinnati and Hamilton County system with a main library and 41 branches. Major sports teams are listed under the communities in which they are located, primarily Cincinnati. The Great Parks of Hamilton County district resides within Hamilton County and maintains a series of preserves and educational facilities. Three of the largest parks within the system are Miami Whitewater Forest, Winton Woods, and Sharon Woods. The Hamilton County Fair is the oldest county fair in Ohio. 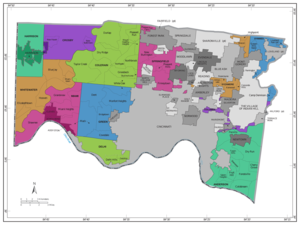 Map of Hamilton County, Ohio, with cities and villages in gray, and townships in colors