Table of Contents ⇨
For the historic house, see Haleʻākala.

Haleakalā ( /ˌhɑːliˌɑːkəˈlɑː/; Hawaiian: [ˈhɐlɛˈjɐkəˈlaː]), or the East Maui Volcano, is a massive shield volcano that forms more than 75% of the Hawaiian Island of Maui. The western 25% of the island is formed by another volcano, Mauna Kahalawai, also referred to as the West Maui Mountains.

Early Hawaiians applied the name Haleakalā ("house of the sun") to the general mountain. Haleakalā is also the name of a peak on the southwestern edge of Kaupō Gap. In Hawaiian folklore, the depression (crater) at the summit of Haleakalā was home to the grandmother of the demigod Māui. According to the legend, Māui's grandmother helped him capture the sun and force it to slow its journey across the sky in order to lengthen the day.

According to the United States Geological Survey USGS Volcano Warning Scheme for the United States, the Volcano Alert Level for Haleakala as of August 2015 was "normal". [2] A Normal status is used to designate typical volcanic activity in a non-eruptive phase. Haleakala has produced numerous eruptions in the last 30,000 years, including in the last 500 years. This volcanic activity has been along two rift zones: the southwest and east. These two rift zones together form an arc that extends from La Perouse Bay on the southwest, through the Haleakalā Crater, and to Hāna to the east. The east rift zone continues under the ocean beyond the east coast of Maui as Haleakalā Ridge, making the combined rift zones one of the longest in the Hawaiian Islands chain. [3]

Until recently, East Maui Volcano was thought to have last erupted around 1790, based largely on comparisons of maps made during the voyages of La Perouse and George Vancouver. Recent advanced dating tests, however, have shown that the last eruption was more likely to have been in the 17th century. [4] These last flows from the southwest rift zone of Haleakalā make up the large lava deposits of the Ahihi Kina`u/La Perouse Bay area of South Maui.

Contrary to popular belief, Haleakalā crater is not volcanic in origin, nor can it accurately be called a caldera (which is formed when the summit of a volcano collapses to form a depression). Scientists believe that Haleakalā's crater was formed when the headwalls of two large erosional valleys merged at the summit of the volcano. These valleys formed the two large gaps — Koʻolau on the north side and Kaupō on the south — on either side of the depression.

Haleakalā is far smaller than many volcanic craters ( calderas); there is an excellent chance that it is not extinct, but only dormant; and strictly speaking it is not of volcanic origin, beyond the fact that it exists in a volcanic mountain. [5] 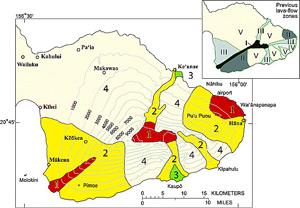 Using this same scale, preliminary estimates of lava-flow hazard zones on Maui made in 1983 by the U.S. Geological Survey rated the summit and southwest rift zone of Haleakala as Hazard Zone 3. The steep, downslope areas of the Kanaio and Kahikinui ahupuaʻa and the area north of Hana are rated as Hazard Zone 4. Other areas of Haleakala are rated comparable to the lava-flow hazards of Mauna Kea and Kohala (Hazard Zones 7 through 9). [6] [7]

These high hazard estimates for Haleakala are based on the frequency of its eruptions. Haleakala has erupted three times in approximately the last 900 years. By way of comparison, both Mauna Loa and Kilauea have erupted more than a dozen times each in the last 90 years. Hualalai has an eruption rate comparable to Haleakala. All of Hualalai is rated as Hazard Zone 4. However, the frequency of eruption of a volcano is only one of the criteria on which hazards are based. The other important criterion is the lava flow coverage rate. Using the preliminary dates for Haleakala flows, only 8.7 square miles (23 km2) of lava flows have been emplaced in the last 900 years. In comparison, approximately 43 square miles (110 km2) of Hualalai are covered with flows 900 years old or younger and approximately 104 square miles (270 km2) on Kilauea and 85 square miles (220 km2) on Mauna Loa are covered by lavas less than 200 years old. Thus, Haleakala is a distant fourth in coverage rates. [7] 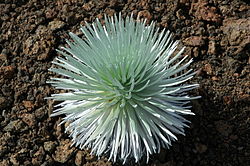 This rare species of Silversword is fragile and lives only upon the slopes of Haleakalā.

Surrounding and including the crater is Haleakalā National Park, a 30,183-acre (122.15 km2) park, of which 24,719 acres (100.03 km2) are wilderness. [8] The park includes the summit depression, Kipahulu Valley on the southeast, and ʻOheʻo Gulch (and pools), extending to the shoreline in the Kipahulu area. From the summit, there are two main trails leading into Haleakalā: Sliding Sands Trail and Halemauʻu Trail.

The temperature near the summit tends to vary between about 40 °F (5 °C) and 60 °F (16 °C) and, especially given the thin air and the possibility of dehydration at that elevation, the walking trails can be more challenging than one might expect. This is aggravated by the fact that trails lead downhill from parking areas into the crater. Because of this, hikers are faced with a difficult return ascent after potentially descending 2000 ft or more to the crater floor. Despite this, Haleakalā is popular with tourists and locals alike, who often venture to its summit, or to the visitor center just below the summit, to view the sunrise. There is lodging in the form of a few simple cabins, though no food or gas is available in the park. [9] 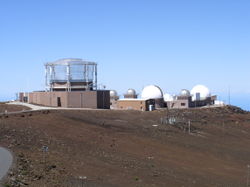 Because of the remarkable clarity, dryness, and stillness of the air, and its elevation (with atmospheric pressure of 71 kilopascals (530 mmHg) [10]), as well as the absence of the lights of major cities, the summit of Haleakalā is one of the most sought-after locations in the world for ground-based telescopes (though to a lesser extent than Mauna Kea on neighboring Hawaii). As a result of the geographic importance of this observational platform, experts come from all over the world to take part in research at " Science City", an astrophysical complex operated by the U.S. Department of Defense, University of Hawaii, Smithsonian Institution, Air Force, Federal Aviation Administration, and others.

Some of the telescopes operated by the US Department of Defense are involved in researching man-made (e.g. spacecraft, monitoring satellites, rockets, and laser technology) rather than celestial objects. The program is in collaboration with defense contractors in the Maui Research and Technology Park in Kihei. The astronomers on Haleakalā are concerned about increasing light pollution as Maui's population grows. Nevertheless, new telescopes are added, such as the Pan-STARRS in 2006. [11] [12] 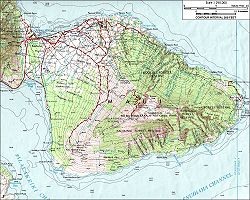 A well traveled Haleakalā Highway, completed in 1935, is a road mainly composed of switchbacks that leads to the peak of Haleakala. [13] The road is open to the public (although parts of it are restricted) and is a well-maintained two-lane highway containing many blind turns and very steep dropoffs. Local animals, including cattle, are often encountered in the roadway. The Park Service charges a vehicle entrance fee of $25 (US). Public transportation does not go through the park, but there are four vehicle based tour companies ( Polynesian Adventure Tours, Skyline Eco Adventures, Haleakala EcoTours, and Valley Isle Excursions) that operate tours of the park and trips to the summit. [14]

There are three Sunset and Stargazing tours permitted within Haleakala National Park. Arrive for sunset and stay to look through a telescope after dark. Cycling and horseback riding are other popular ways to explore the park. There are a few tour guides on Maui that pick people up at their hotels, and outfit them with a bicycle to glide down the road from just outside the National Park boundary (starting at 6500 ft altitude). Tour operators used to run bike rides down the entire 27 miles from the summit, but in 2007 the National Park Service suspended all commercial bicycle activity within the park boundaries, following multiple fatal accidents. [15] Some tour operators now offer a modified version of the service which descends 6,500 feet from outside of the National Park. [16]

Haleakalā's summit experiences a cold-summer Mediterranean climate ( Köppen classification Csc), one of the few locations in the world with this climate type. The Haleakalā Ranger station, at a lower elevation, lies in the subtropical highland climate zone.