Hagerstown has a distinct topography, formed by stone ridges running from northeast to southwest through the center of town. Geography accordingly bounds its neighborhoods. These ridges consist of upper Stonehenge limestone. Many of the older buildings were built from this stone, which is easily quarried and dressed onsite. It whitens in weathering and the edgewise conglomerate and wavy laminae become distinctly visible, giving a handsome and uniquely “ Cumberland Valley” appearance. Several of Hagerstown’s churches are constructed of Stonehenge limestone and its value and beauty as building rock may be seen particularly in St. John’s Episcopal Church on West Antietam Street and the Presbyterian Church at the corner of Washington and Prospect Streets. Brick and concrete eventually displaced this native stone in the construction process. [8]

Despite its semi-rural Western Maryland setting, Hagerstown is a center of transit and commerce. Interstates 81 and 70, CSX, Norfolk Southern, and the Winchester and Western railroads, and Hagerstown Regional Airport form an extensive transportation network for the city. Hagerstown is also the chief commercial and industrial hub for a greater Tri-State Area that includes much of Western Maryland as well as significant portions of South Central Pennsylvania and the Eastern Panhandle of West Virginia. Hagerstown has often been referred to as, and is nicknamed, the Hub City. [1] A person born in Hagerstown is officially called a Hagerstonian. 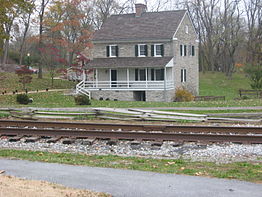 The Hager House and Museum in Hagerstown City Park was once home to the city's founder, Jonathan Hager.

Burnside's Bridge, a site of heavy combat in the Battle of Antietam, which occurred south of Hagerstown. 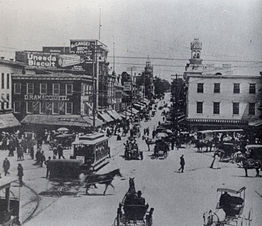 In 1739, Jonathan Hager, a German immigrant from Pennsylvania and a volunteer Captain of Scouts, purchased 200 acres (81 ha) of land in the Great Appalachian Valley between the Blue Ridge and Allegheny Mountains in Maryland and called it Hager’s Fancy. In 1762, Hager officially founded the town of Elizabethtown which he named after his wife, Elizabeth Kershner. Fourteen years later, Jonathan Hager became known as the "Father of Washington County" after his efforts helped Hagerstown become the county seat of newly created Washington County, which Hager also helped create from neighboring Frederick County. The City Council changed the community's name to Hager's-Town in 1813 because the name had gained popular usage, and in the following year, the Maryland State Legislature officially endorsed the changing of the town’s name. [1] [10]

In 1794, government forces arrested 150 citizens during a draft riot which was staged by protesters in response to the Whiskey Rebellion. [11]

Hagerstown's strategic location at the border between the North and the South made the city a primary staging area and supply center for four major campaigns during the Civil War. In 1861, General Robert Patterson's troops used Hagerstown as a base to attack Virginia troops in the Shenandoah Valley. In the Maryland Campaign of 1862, General James Longstreet's command occupied the town while en route to the Battle of South Mountain and Antietam. In 1863, the city was the site of several military incursions and engagements as Gen. Robert E. Lee's army invaded and retreated in the Gettysburg Campaign. In 1864, Hagerstown was invaded by the Confederate army under Lt. Gen. Jubal Early. On Wednesday, July 6, Early sent 1,500 cavalry, commanded by Brig. Gen. John McCausland, into Hagerstown. The Confederates levied a ransom of $20,000 and a large amount of clothing, [12] in retribution for U.S. destruction of farms, feed and cattle in the Shenandoah Valley. This is in contrast to neighboring Chambersburg, Pennsylvania, which McCausland razed on July 30 when the borough failed to supply the requested ransom of $500,000 in U.S. currency, or $100,000 in gold.

Following the war, in 1872 Maryland and Virginia cooperated to re-inter Confederate dead from their impromptu graves to cemeteries in Hagerstown, Frederick and Shepherdstown, West Virginia. Roughly 60% however, remained unidentified. In 1877, 15 years after the Battle of Antietam, also known as the Battle of Sharpsburg, approximately 2,800 Confederate dead from that battle and also from the battles on South Mountain were re-interred in Washington Confederate Cemetery, within Rose Hill Cemetery in Hagerstown. [13] [14]

Hagerstown's nickname of the "Hub City" originated from the large number of railroads (and roads) that served the city. Hagerstown was the center of the Western Maryland Railway and an important city on the Pennsylvania, Norfolk and Western, Baltimore and Ohio, and Hagerstown and Frederick Railroads. Currently, the city is a vital location on CSX, Norfolk Southern, and the Winchester and Western Railroads.

Hagerstown was formerly served by the Hagerstown & Frederick Railway, an interurban trolley system, from 1896 to 1947.

The weathervane known as "Little Heiskell", a symbol of the city of Hagerstown, Maryland.

One of the most recognizable symbols of Hagerstown is the weathervane known as "Little Heiskell". Named after the German tinsmith Benjamin Heiskell who crafted it in 1769 in the form of a Hessian soldier, [1] it stood atop the Market House first and City Hall second for a combined 166 years. It was moved from the Market House to City Hall in 1824.

During the Civil War era, the weathervane gained its characteristic bullet hole from a Confederate sharpshooter, who won a bet after shooting it from a full city block away.

In 1935, the original was retired to the Museum of the Washington County Historical Society, later to be moved to its present display in the Jonathan Hager House. An exact replica has replaced it atop City Hall.

The weathervane has been depicted in the city's annual Mummers Day Parade by Charles Harry Rittenhouse, Sr. sporting the necessary accoutrements of a German mercenary soldier.

Little Heiskell was at one time the mascot of North Hagerstown High School.

From 1931 to 1984, Fairchild Aircraft was based in Hagerstown and was by far the area's most prominent employer. The importance of the company to the city and the country as a whole earned Hagerstown its former nickname "Home of the Flying Boxcar".

Fairchild moved to Hagerstown from Farmingdale, New York, in 1931 after Sherman Fairchild purchased a majority stock interest in Kreider-Reisner Aircraft Company of Hagerstown in 1929. Among Fairchild's products during World War II were PT-19/ PT-23/ PT-26 (Cornell) and AT-21 trainers, C-82 "Packet" cargo planes and missiles. At its height in World War II, Fairchild employed directly and indirectly up to 80% of Hagerstown's workforce or roughly 10,000 people. 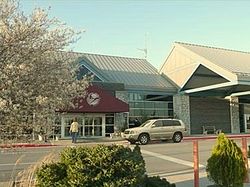 All production ceased in Hagerstown in 1984 and the company moved elsewhere. Presently, the company is based in San Antonio, Texas and after a series of mergers and acquisitions, is known as M7 Aerospace.

Hagerstown is also the birthplace of Salisbury, Maryland-based Piedmont Airlines which started out as Henson Aviation. It was founded by Richard A. Henson in 1931. Today, Hagerstown Regional Airport-Richard A. Henson Field is named as such in honor of the airlines' founder.

According to the United States Census Bureau, the city has a total area of 11.80 square miles (30.56 km2), of which 11.79 square miles (30.54 km2) is land and 0.01 square miles (0.03 km2) is water. [2] Major waterways within Hagerstown include Hamilton Run and Antietam Creek that are tributaries of the Potomac River. Natural landscape around Hagerstown consists of low, rolling hills with elevations of 500 feet (150 m) to 800 feet (240 m) above sea level and rich, fertile land that is well-suited and utilized for dairy farming, cornfields, and fruit orchards typical of Mid-Atlantic agriculture.

Hagerstown is situated in the transition between the humid subtropical climate zone and the humid continental climate zone (Köppen Dfa), with hot, humid summers and cool to moderately cold winters.

There were 16,449 households of which 32.9% had children under the age of 18 living with them, 33.6% were married couples living together, 18.4% had a female householder with no husband present, 5.4% had a male householder with no wife present, and 42.6% were non-families. 34.5% of all households were made up of individuals and 10.5% had someone living alone who was 65 years of age or older. The average household size was 2.36 and the average family size was 3.04.

The current city executive or Mayor of Hagerstown is Robert "Bob" Bruchey (R) who has served the city since November 2016.

The representative body of Hagerstown is known as the City Council. Among its members are: Lewis Metzner, Kristin Aleshire, Shelley McIntire, Emily Keller, and Austin Heffernan. [26]

Once primarily an industrial community, Hagerstown's economy depended heavily on railroad transportation and manufacturing, notably of aircraft, trucks, automobiles, textiles, and furniture. [1] Today, the city has a diversified, stable business environment with modern service companies in various fields as well as continued strength in manufacturing and transportation in railroads and highways. Surrounding Hagerstown, there has been and continues to be a strong agricultural presence while tourism, especially with respect to the retail sector, also provides support to the local economy.

Hagerstown-Washington County boasts one of the highest densities of retail in the country. [27] 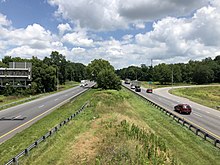 Looking north along I-81 from MD 58 in Hagerstown 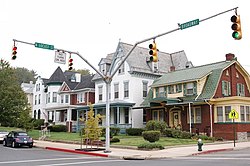 A street corner on Broadway near downtown Hagerstown.

Hagerstown's location at the center of the Western Maryland region makes it an ideal starting point for touring, especially with respect to the Civil War. Antietam National Battlefield, the site of the bloodiest single day in American history, is located in nearby Sharpsburg. South Mountain State Battlefield is also located in Washington County in Boonsboro. Gettysburg, Monocacy, and Harpers Ferry battlefields are all located within a 30-minute drive of Hagerstown.

Fort Frederick State Park, which features a restored fort used in the French and Indian War, is west of the city in nearby Big Pool, Maryland.

Washington Monument State Park, near Boonsboro, pays tribute to the country's first president, George Washington. It is the oldest structure to honor the 'father of our country.' 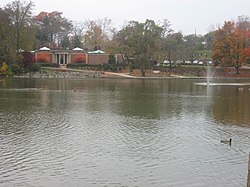 Within the city, there are numerous parks including Hagerstown City Park, which is home to the Washington County Museum of Fine Arts, Mansion House Art Gallery, Western Maryland 202 Locomotive Display and Museum, and the Hager House and Museum (once home of Jonathan Hager, founder of Hagerstown). [1] Outside of the Park, Hagerstown Roundhouse Museum showcases exhibits of Hagerstown's early railroad history. Discovery Station, located downtown, is a hands-on science and technology museum featuring exhibits in numerous galleries and display areas, including the Hagerstown Aviation Museum.

Hagerstown is home to the Maryland Theatre, [1] a symphony house that plays host to the Maryland Symphony Orchestra and the annual Miss Maryland USA Beauty Pageants. The city also has the Washington County Playhouse, which does dinner theater performances. The new Academy Theatre Banquet & Conference Center, located downtown, houses the community theater group Potomac Playmakers. [32] And the Barbara Ingram School for the Arts is a magnet school for gifted art students, located in downtown Hagerstown's arts and entertainment district on South Potomac Street. 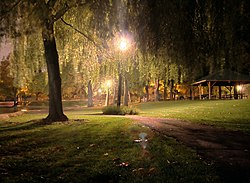 Downtown Hagerstown recently has enjoyed a resurgence [1] and now hosts several popular annual events. The Quad State Beer Fest is a craft beer and music festival that features regional breweries, rock music and entertainment held at various times throughout the year. The Interstate BBQ Festival is a Kansas City Barque Society sanctioned competition which hosts dozens of professional and backyard teams and draws thousands of spectators as a huge regional event. The city draws thousands every year around May–June to the Western Maryland Blues Fest, which showcases blues artists from around the country. The Augustoberfest celebrates Hagerstown's German heritage. [33] And the annual Alsatia Mummers' Halloween Parade happens to be the largest nighttime parade on the East Coast.[ citation needed]

Fairgrounds Park features recreational facilities such as the Hagerstown Ice & Sports Complex and hosts various events throughout the year like the annual Hagerstown Hispanic Festival held in mid-September. [34] [35]

Hagerstown is home to the Hagerstown Suns minor-league baseball team. The Suns play in the South Atlantic League. They play in Municipal Stadium.

Hagerstown shares a radio market, the 166th largest in the United States, with Chambersburg, Pennsylvania and Waynesboro, Pennsylvania. [36] The following box contains all of the radio stations in the area:

Hagerstown is the base for three television stations and shares a Designated Market Area, the sixth largest in the United States, with Washington, D.C. [37]

The metropolitan area's population in 2000 was 222,771. The 2008 estimate is 263,753, making Greater Hagerstown the 169th largest metropolitan area in the United States. The growth rate from 2000-2008 is +18.4%, the 48th highest among metropolitan areas in the entire country and the highest in Maryland (and in West Virginia). [9] The growth is mostly due to the influx of people from Washington, D.C. and Baltimore, MD.[ citation needed]