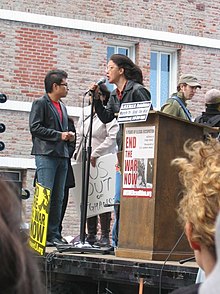 In the 2008 Presidential election, La Riva received 6,821 votes, the 10th highest vote total. [8] La Riva has also been the director of the National Committee to Free the Cuban Five, and president of the typographical sector of the Northern California Media Workers Union. [9]

In July 2015, she was announced as the PSL's presidential nominee, with Eugene Puryear as her running mate. [12]

La Riva was a candidate for the Peace and Freedom Party nomination for Governor of California in 2018. [15]

She received the PSL nomination for the 2020 presidential election, with Leonard Peltier as her running mate. [16]