Glenbrook North High School (GBN and formerly Glenbrook High School) is a public high school in Northbrook, Illinois, United States. It was established in 1953 and is part of the Northfield Township High School District 225.

In 2018, it was ranked the 48th best public high school in the United States by Niche.

Glenbrook North has grown fourfold in the size of its student body since its founding. In 1979, the school opened the Sheely Center for the Performing Arts, [7] and in 1990, a fieldhouse was dedicated. In the spring of 1996, a three-year renovation and construction project involving the science facilities and the “A” wing was built. A second swimming pool was built in 2000 to accommodate the burgeoning growth in aquatics. A successful referendum in 2006 enabled the creation of the two-story classroom “F” wing, state of the art Fitness Center, complete renovation and additions to the Music Area, and a sun-filled main entrance, which were completed in 2009. [8]

Throughout the years, Glenbrook North High School has received state and national recognition for its academic excellence. In the late 1950s, when Glenbrook was less than 10 years old, it was named one of the top 44 high schools in the country by a survey in a national magazine. In 1984, GBN was named one of only four high schools in the state of Illinois to receive the United States Office of Education Excellence in Education Award from President Ronald Reagan. In 2008, GBN was selected again for the nation’s top distinction as a Blue Ribbon School. [9]

Glenbrook North alumnus John Hughes' 1985 film The Breakfast Club featured a group of kids from "Shermer, Illinois 60062." Shermerville was the original name of the town of Northbrook, where GBN is located, and 60062 is the town's zip code. The movie features the clash between what were known during the 1980s as the 'sporto' versus 'freak' cultures at GBN. Some interior scenes of The Breakfast Club were filmed inside Glenbrook North, and exterior shots of GBN were used in both The Breakfast Club and Ferris Bueller's Day Off. [10]

On January 22, 1997, President Bill Clinton visited the school to deliver a speech about education initiatives. [11] It was held in the school's fieldhouse and largely centered around mathematics and science. At the time, students in Northern Illinois were participating in a program called "First in the World." The program was to judge the level of knowledge in math and science against other schools around the world. Northern Illinois students scored 1st in the Science category and 3rd in the Mathematics category. Remarking about Glenbrook High School District 225, President Clinton said:

Can you imagine a school district or a set of school districts with more genuine local control than this one, with—more than these— more parental involvement, more committed teachers, more—you know, you've got local control. But you didn't use it as an excuse not to throw your hat in the ring. I think it's great that it came out this way. But if you had finished eighth and ninth, I would still be here to pat you on the back because you had the guts to do it. [12]

Less than a month later, Bill Clinton referenced his visit to the school and these achievements in his 1997 State of the Union on February 4, 1997. [13]

In May 2003, the school gained notoriety after an off-campus, non-school-sanctioned event involving students dressed in school colors turned into a major hazing incident that attracted national media attention. The event was a " Powder Puff" girls' football game between members of the junior and senior classes. The "game" took place on May 4, 2003, in Chipilly Woods, part of the Cook County Forest Preserve District. Although the annual Powder Puff game had been held at the school's football stadium in earlier decades, there was no football at the 2003 event. During the event, about 20 junior class participants were covered in paint, urine, feces, and animal guts. Some were shot with paintball guns, others were kicked and beaten. At least five participants sustained injuries requiring medical attention. [14]

Thirty-one students – twenty-eight females and three males – were suspended from school for 10 days. They were later expelled. [15] Some of the expelled students and their parents filed a lawsuit to allow the expelled students to graduate. [16] The plaintiffs and the school district reached an agreement where the expelled students would have their diplomas mailed to them but would not be able to participate in graduation ceremonies. [17] Local law enforcement authorities investigated the hazing incident and filed charges against 15 students for assault and battery. [18] [19] Two mothers were charged with providing alcohol for the event. All were convicted and the sentences received were light, ranging from probation to community service. [20]

A community-wide task force was established by the Northbrook Police Department Community Services Division after the hazing incident. [21] Their final report stressed the needs for recognizing and preventing hazing incidents.

The academic school year consists of 37 weeks divided into two semesters. It has a block schedule with classes meeting on alternating days and each school day consists of four blocks of 90 minutes each. The summer school program at Glenbrook North is six weeks in length.

Glenbrook Academy of International Studies is a nationally recognized four-year program with students from Glenbrook North and Glenbrook South High Schools. 30 freshmen are accepted into the Academy each year, with no opportunity of joining after that. Founded in 1981 to give gifted students a more unorthodox learning alternative, it integrates the teaching and learning of English, Social Studies, and World Languages. Each class learns one of a selection of four different foreign languages: Spanish, French, German, and Mandarin Chinese. [26]

Since 1974, it has won at least one national championship in debate in fourteen individual years. It has also won an Illinois High School Association (IHSA) state championship in 18 of the 35 years since 1982, and has placed as runner up in three of those years. [29]

Its students organize an annual food drive, collecting canned goods to benefit the Northfield Township Food Pantry. [34] In 2009, the school joined with Glenbrook South High School to organize Foodstock, a benefit concert featuring Fall Out Boy lead singer Patrick Stump. [35] Students from both schools came together to break the Guinness World Record for the largest can stack, building a structure where 59,084 cans were stacked in the shape of two hands holding a can. [36]

The school is a member of the Central Suburban League and the Illinois High School Association (IHSA). William Lutz Stadium, which is the home of the Glenbrook North's football, lacrosse, track & field and soccer teams, is named in honor of William Lutz, the school's first athletic director.

In 2005, the school became the first large-enrollment high school in Illinois to have won a state championship in each of football, basketball and baseball. [38] The following GBN teams have won IHSA sponsored state championship tournaments in the listed years: [39]

On December 28, 2005, the school's basketball program gained national media attention [40] when Jon Scheyer scored 21 points in the final 75 seconds of a comeback attempt against Proviso West. Scheyer fell one point short of the Glenbrook North basketball record for most points in a game, scoring 52 points. The record is held by current Northwestern men's basketball head coach Chris Collins, who scored 53 in a game as a student at Glenbrook North. Glenbrook North's boys basketball team won the 2005 state championship, led by Scheyer, an eventual McDonald's All-American and two-time NCAA national champion player and coach at Duke. The Spartans were coached by Dave Weber, brother of Bruce Weber, current Kansas State men's basketball head coach. Glenbrook North finished the 2004–2005 season with a record of 32–2.

In 2013, senior Brian Ohr won the Class 3A boys golf individual state championship. He shot a 141 between the two rounds. Ohr beat teammate Nick Hardy, who finished third in the tournament. Hardy was the more prominent of the two having led the U.S. Amateur earlier that year. Ohr currently golfs at Miami University while Hardy golfs at the University of Illinois at Urbana–Champaign. As a freshman at Illinois in 2014–2015, Hardy won a share of the Big Ten Championship. 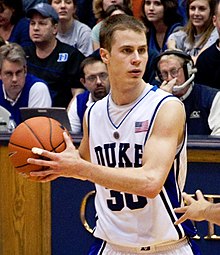