Georgian mythology refers to the mythology of pre-Christian Georgians.

Like many another rich and ancient body of myth, that of the Georgians has been coloured by the belief systems of the many cultures with which it has come into contact over the millennia. The bedrock upon which it is founded is, by definition, the indigenous mythology of the Kartvelian peoples themselves, whose first emergence from the darkness of prehistory is believed by many scholars to occur with the founding of the Kingdoms of Diauehi, Colchis and Iberia. This said, the consensus of scholarly opinion is that the proto-Kartvelians (possibly to be identified with the Mushki) originated in Ancient Anatolia, where their religious ideas would have come into contact with those of the Hattians, the Hittite empire, the Hurrians, Urartu, and the Armenians. Later influences include the mythologies of the Ancient Greeks, [1] the Vainakh peoples [1] and Iranians - the last-named comprising both the belief systems of the Northern Iranian nomad Scythians and Sarmatians (still preserved to some extent in the mythology of their descendants the Ossetians) and that of the Zoroastrian religion of the Ancient Persian empire, which has left such an enduring legacy among the nations of the Caucasus. [2] (See also Iranian religions) [3]

Georgian myths and legends are preserved mainly as popular tales. Many of them have eventually fused with Christian legends after the Christianization of Georgia seventeen centuries ago.

The evangelizing of Georgia was, however, far from uniform: while the lowland populations embraced Christianity in the fifth century, the highlanders of the mountain valleys in the Greater Caucasus range were converted only ten centuries later - and in a superficial way at that. It follows from this that accounts of pagan practices in the lowland Christian kingdom are poorly preserved in fragmentary form through brief passages in national chronicles and literary classics. Survivals of pagan beliefs and practices in the Georgian plains are thus, understandably, heavily influenced by Christianity, lacking in mythological unity and essentially folkloric. [4] [5]

The mountain Georgians, on the other hand, preserved a rich and well-organized [pagan] religious system to the beginning of the twentieth century, with differentiated cults that continued to be productive [thanks largely to the persistence of] a priestly class with an orally-transmitted body of knowledge. [5]

In the beginning there existed only Morige Ghmerti and his Sister. She made him unhappy, so he cursed her. The sister became a demon. For every good thing that Morige Ghmerti created, the Demon created an evil thing to mar / oppose it. Woman too was a creation of the Demon, as were the lesser demons ( Georgian: დევი, translit.: devi - see below) , while man and the lesser gods were creations of Morige Ghmerti. The lesser gods grew weary in their unceasing fight with the demons and fled to the upper world of Zeskneli, leaving behind them men. The men however lacked the power to resist the demons, so the lesser gods ( Georgian: ღვთის შვილნი, translit.: ghvtis shvilni - see below) hunted down the demons and drove them underground to the netherworld of Kveskneli. The demons left behind them the women who, like them, were part of the evil creation. [5]

Men and women are thus only emanations of, or substitutes for, the gods above and the demons below, respectively. The same principle holds true for all created things: the entities and substances of the universe are divided into two antagonistic series, one wild and demonic, the other social and divine. The only entities or substances that are truly real are those of the upper world of Zeskneli and the lower world of Kveskneli. The middle world inhabited by humans is thus only a place of passage, mediation and meeting and the beings who people it have no essence in themselves, being only emanations of the divine or subterranean worlds, or else their unions. [5]

This mountain Georgian creation myth recalls to some extent that of the Zoroastrians, in that it involves the marring of the good creation of a benign creator by an evil spirit (compare Angra Mainyu's attempts to mar the creation of Ahura Mazda - see Bundahishn). It differs radically, however, in its attribution of gender to the principles of good and evil and still more distinctively in its vision of a primordial heavenly harmony of twin creative principles as a brother and sister couple with the disruption of this incestuous union setting in motion creation, with all its attendant woes.

In pre-Christian Georgian mythology, the universe is perceived as a sphere. It comprises three worlds or levels, known as skneli (სკნელი):

These three worlds are connected by a world tree growing on the edge of the universe (or in other accounts a tower, chain, or pillar) - a common theme in the mythologies of many other cultures (compare, for example, Yggdrasil, Égig érő fa and Iroko). Beyond them and the universe is Gareskneli (გარესკნელი), "the world of oblivion", an endless void of darkness and eternity.

There are also two bodies of water and two of fire ( each 'element' having both a subterranean and a celestial form ) with unique influences upon human life. The moon (considered a brother) and the sun (considered a sister) traverse these two realms regularly, but in opposite directions.

After Christianization, Zeskneli became associated with Heaven, Kveskneli with Hell, and spiritual travel between these worlds associated with death alone, to the exclusion of older, more shamanic conceptions of the otherworld journey.

The mountain Georgian equivalent of the shaman is the Kadagi, a person (of either gender) who has become permanently possessed by one of the class of minor (i.e. local / specialised) divinities known most often by the name of Hat'i (= 'sign' ), but also by those of Dzhuar (= 'cross') and Saghmto (= 'divinity'). The Hat'i numbered several hundred at the turn of the nineteenth century and the word Hat'i could designate not only a divinity of this class but also its manifestation ( as image, object or real or imaginary animal ) and the place (temple / sanctuary) where it was worshipped. The Kadag would go into trance, both at religious rituals and at events important in individual or collective life, and his or her indwelling Hat'i would foretell the future in a special secret or sacred 'language of the Hat'i '. [5] (See also Spirit possession).

A second type of practitioner of shamanic type (exclusively female) was the Mesultane - the word deriving from Georgian suli 'soul'. A Mesultane - usually a woman, although sometimes as young as a girl of nine - was a female who possessed 'the faculty of visiting the beyond in spirit'. At certain times these females would plunge into 'a lethargy broken by mutterings', following which they would awaken and describe their 'journey', communicating the requests of the dead to particular individuals or to the community at large. From their ability to enter these trance states they would derive honours and prestige. [6]

Spirits, creatures, and other beings 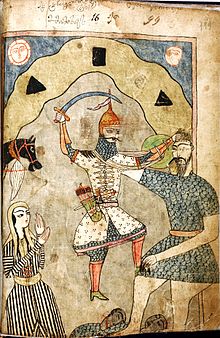