The Strait of Georgia ( French: Détroit de Géorgie) or the Georgia Strait [3] is an arm of the Salish Sea between Vancouver Island and the extreme southwestern mainland coast of British Columbia, Canada and the extreme northwestern mainland coast of Washington, United States. It is approximately 240 kilometres (150 mi) long and varies in width from 20 to 58 kilometres (12 to 36 mi). [4] Along with the Strait of Juan de Fuca and Puget Sound, it is a constituent part of the Salish Sea.

The Fraser River accounts for roughly 80 percent of the freshwater entering the strait. Water circulates in the strait in a generally counterclockwise direction. [1]

The term "Gulf of Georgia" includes waters other than the Georgia Strait proper, such as the inter-insular straits and channels of the Gulf Islands, and may refer to communities on the shore of southern Vancouver Island. As defined by George Vancouver in 1792, the Gulf of Georgia included all the inland waters beyond the eastern end of the Strait of Juan de Fuca, including Puget Sound, Bellingham Bay, the waters around the San Juan Islands, as well as the Strait of Georgia. [7]

Georgia Strait in the morning

First Nations communities have surrounded the Strait of Georgia for thousands of years. The first European exploration of the area was undertaken by Captain Jose Maria Narvaez and Pilot Juan Carrasco of Spain in 1791. At this time Francisco de Eliza gave the strait the name "Gran Canal de Nuestra Señora del Rosario la Marinera."

In 1792, it was renamed for King George III [8] as the "Gulf of Georgia" by George Vancouver of Great Britain, during his extensive expedition along the west coast of North America. Vancouver designated the mainland in this region as New Georgia and areas farther north as New Hanover and New Bremen.

The Strait of Georgia is known as a premier scuba diving and whale watching location.[ citation needed]

In 1967, the Georgia Strait inspired the name of Vancouver's alternative newspaper, The Georgia Straight, which has been published continuously since.

Towns and cities on the strait include Campbell River, Courtenay, Comox, Qualicum Beach, Parksville, Lantzville, and Nanaimo on the western shore, as well as Powell River, Sechelt, Gibsons, and Greater Vancouver on the east. 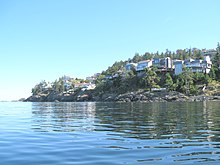 Across the border in the United States, Bellingham, Washington and other communities also lie on the eastern shore. Other settlements on Vancouver Island (such as Duncan) and the mainland are separated from Georgia Strait itself by islands and lesser straits but are often spoken of as being in the Strait of Georgia region.

Sundown over the strait from the ferry
Main article: Salish Sea
See also: List of Fishes of the Salish Sea

In March 2008, the Chemainus First Nation proposed renaming the strait the " Salish Sea", an idea that reportedly met with approval by B.C.'s Aboriginal Relations Minister Mike de Jong, who pledged to put it before the B.C. cabinet for discussion. Making the name "Salish Sea" official required a formal application to the Geographical Names Board of Canada. [9] A parallel American movement promoting the name had a different definition, combining of the Strait of Juan de Fuca and Puget Sound as well as the Strait of Georgia and related waters under the name Salish Sea. This latter definition was made official in 2009 by geographic boards of Canada and the United States.

In October 2009, the Washington state Board of Geographic Names approved the Salish Sea toponym, not to replace the names of the Strait of Georgia, Puget Sound, and Strait of Juan de Fuca, but instead as a collective term for all three. [10] The British Columbia Geographical Names Office passed a resolution recommending that the name only be adopted by the Geographical Names Board of Canada should its US counterpart approve the name change. [10] [11] [12] The United States Board on Geographic Names approved the name on November 12, 2009 [13] and Canada approved it in 2010.

Media related to Strait of Georgia at Wikimedia Commons