Georgetown is a home rule-class city [4] in Scott County, Kentucky, in the United States. The 2018 population was 34,395 per the United States Census Bureau. [5] It is the 7th-largest city by population in the U.S. state of Kentucky. It is the seat of its county. It was originally called Lebanon when founded by Rev. Elijah Craig and was renamed in 1790 in honor of President George Washington. [6] It is the home of Georgetown College, a private liberal arts college. Georgetown is part of the Lexington-Fayette, KY Metropolitan Statistical Area. At one time the city served as the training camp home for the NFL's Cincinnati Bengals.

The city's growth began in the mid-1980s, when Toyota built Toyota Motor Manufacturing Kentucky in the city. This was its first wholly owned United States plant. The plant opened in 1988; as of 2020, it builds the Camry, Camry Hybrid, Avalon, Lexus ES, and RAV4 Hybrid automobiles. [7] [8]

Native peoples have lived along the banks of Elkhorn Creek in what is now Scott County for at least 15,000 years. [6] At the time of European encounter, the historic Shawnee people occupied this area.

Anglo-American exploration can be dated to the late colonial period and a June 1774 surveying expedition from Fincastle County, Virginia, led by Colonel John Floyd. For his military service, he was granted a claim of 1,000 acres (4.0 km2) in the area by the state of Virginia. He named it Royal Spring but did not settle it. [9] John McClellan was the first English colonist to settle the area and established McClellan's Station there in 1775, but the compound was abandoned following an Indian attack on December 29, 1776.

In 1782, the Baptist preacher Elijah Craig led his congregation to the site from Orange County, Virginia, and established a new settlement which he called Lebanon. This was incorporated by the Virginia legislature in 1784. At the time, Virginia claimed this territory under its colonial charter. [9] Craig established some of the first mills west of the Appalachian Mountains along the Royal Spring Branch, where he also manufactured cloth and paper. [6] He also founded a distillery in 1789, as well as a school called the Rittenhouse Academy. This eventually developed as Georgetown College. [10]

The county developed an agricultural economy, as it was part of the fertile Bluegrass Region. Planters cultivated tobacco and hemp, and raised blooded livestock, including Thoroughbred racehorses, and cattle and sheep. During the Civil War, Kentucky stayed in the Union. Georgetown was raided by Confederate Gen. John Hunt Morgan twice, once on July 15, 1862, and the second time on July 10, 1864. [9]

Following the war, the town became a railroad hub, connected to the Cincinnati Southern, the Louisville Southern, and the Frankfort & Cincinnati. The last was considered the "whiskey route" and carried much of the region's bourbon to markets along the Ohio River. [9]

In 1896 a girl's academy was founded by the Catholic Sisters of Visitation. The school closed in 1987, and was adapted as the Cardome Centre. It now serves as a community center for the city of Georgetown. [11]

Throughout the 20th century, Georgetown has been in transition from an economy based primarily on agriculture, to a diversified one mixing manufacturing, small business, and the family farm. During the 1960s, the construction of Interstate 75 placed the city on one of the busiest highways in America. The selection of Georgetown as the site of Toyota Motor Manufacturing Kentucky in 1985 has resulted in the greatest period of growth in the city's history.

The historic Ward Hall, now the home of The Ward Hall Preservation Foundation, is located just outside Georgetown. Ward Hall was the summer home of Junius Ward. The home represents the height of the Greek Revival period of architecture in Kentucky and is listed on the National Register of Historic Places (NRHP).

The Georgetown business section has a historic district known as the Oxford Historic District. It is also listed on the NRHP [12]

There were 10,733 households out of which 38.1% had children under the age of 18 living with them, 49.6% were married couples living together, 14.9% had a female householder with no husband present, and 30.6% were non-families. 24.9% of all households were made up of individuals and 6.6% had someone living alone who was 65 years of age or older. The average household size was 2.59 and the average family size was 3.09. 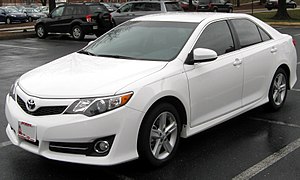 The best selling car in the United States, the Toyota Camry, is manufactured in Georgetown, Kentucky

Georgetown College is a private liberal arts college located in the downtown area of Georgetown. Baptist Seminary of Kentucky is a seminary in Georgetown.

Public education in Georgetown and Scott County consists of a preschool center serving special needs and economically at-risk students aged 3–5, nine elementary schools (grades K–5), three middle schools (grades 6–8) and two high schools (grades 9–12). These schools are all part of the Scott County Schools system. Plans had been in progress for an additional high school and middle school within the city limits during the 2010s due to the expanding population. The district chose not to build a new middle school, opting instead to expand one of its three existing middle schools, but opened a new high school and a new elementary school in 2019. [18] [19] Scott County High School also houses a separate (though still attached) wing for students in the ninth grade, called the Ninth Grade Center, which was developed to ease the transition for students between middle school and high school. Elkhorn Crossing School, which had been a detached campus of Scott County High before the 2019 opening of Great Crossing High School, provides some sophomores and juniors at both high schools with a curriculum that integrates academic and career-based disciplines. Another unique feature, the Alternative School, is also part of the Scott County High School educational complex. The Alternative School strives to educate students who may have difficulties in a normal classroom setting (for example, those with disciplinary or other concerns).

Public schools located within Georgetown and Scott County include:

Georgetown has a lending library, the Scott County Public Library. [20]

Georgetown has one sister city, as designated by Sister Cities International:

Georgetown's newspaper, the Georgetown News-Graphic, prints on Tuesday, Thursday, and Saturday. Residents of the area commonly subscribe to this locally geared newspaper in addition to the larger Lexington daily newspaper, the Lexington Herald-Leader. [22]