Michigan consists of two peninsulas that lie between east longitude, and are separated by the Straits of Mackinac, and some nearby islands. With the exception of two small areas that are drained by the Mississippi River by way of the Wisconsin River in the Upper Peninsula and by way of the Kankakee- Illinois River in the Lower Peninsula, Michigan is drained by the Great Lakes- St. Lawrence watershed and is the only state with the majority of its land thus drained.

The Great Lakes that border Michigan from east to west are Lake Erie, Lake Huron, Lake Michigan, and Lake Superior. Because of the lakes, Michigan has more lighthouses than any other state.[ citation needed] The state is bounded on the south by the states of Ohio and Indiana, sharing land and water boundaries with both.

The northern boundary then runs completely through Lake Superior, from the western boundary with Minnesota to a point north of and around Isle Royale, thence traveling southeastward through the lake in a reasonably straight line to the Sault Ste. Marie area. In Southeastern Michigan there is a water boundary with Canada along the entire lengths of the St. Clair River, Lake St. Clair (including the First Nation reserve of Walpole Island) and the Detroit River. The southeastern boundary ends in the western end of Lake Erie with a three-way convergence of Michigan, Ohio and Ontario.

Tahquamenon Falls in the Upper Peninsula of Michigan.

The heavily forested Upper Peninsula is relatively mountainous in the west. The Porcupine Mountains, which are part of one of the oldest mountain chains in the world, [2] rise to an altitude of almost 2,000 feet (610 m) above sea level and form the watershed between the streams flowing into Lake Superior and Lake Michigan. The surface on either side of this range is rugged. The state's highest point, in the Huron Mountains northwest of Marquette, is Mount Arvon at 1,979 feet (603 m). The peninsula is as large as Connecticut, Delaware, Massachusetts, and Rhode Island combined but has fewer than 330,000 inhabitants. They are sometimes called "Yoopers" (from "U.P.'ers"), and their speech (the " Yooper dialect") has been heavily influenced by the numerous Scandinavian and Canadian immigrants who settled the area during the lumbering and mining boom of the late nineteenth century.

The geographic orientation of Michigan's peninsulas makes for a long distance between the ends of the state. Ironwood, in the far western Upper Peninsula, lies 630 highway miles (1,015 km) from Lambertville in the Lower Peninsula's southeastern corner. The geographic isolation of the Upper Peninsula from Michigan's political and population centers makes the U.P. culturally and economically distinct. Occasionally U.P. residents have called for secession from Michigan and establishment as a new state to be called " Superior." 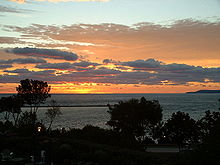 The Lower Peninsula, shaped like a mitten, is 277 miles (446 km) long from north to south and 195 miles (314 km) from east to west and occupies more than two-thirds of the state's land area. The surface of the peninsula is generally level, broken by conical hills and glacial moraines usually not more than a few hundred feet tall. It is divided by a low water divide running north and south. The larger portion of the state is on the west of this and gradually slopes toward Lake Michigan. The highest point in the Lower Peninsula is either Briar Hill at 1,705 feet (520 m), or one of several points nearby in the vicinity of Cadillac. The lowest point is the surface of Lake Erie at 571 feet (174 m).

A feature of Michigan that gives it the distinct shape of a mitten is the Thumb. This peninsula projects out into Lake Huron and the Saginaw Bay. The geography of the Thumb is mainly flat with a few rolling hills. Other peninsulas of Michigan include the Keweenaw Peninsula, making up the Copper Country region of the state. The Leelanau Peninsula lies in the Northern Lower Michigan region. See Also Michigan Regions

Numerous lakes and marshes mark both peninsulas, and the coast is much indented. Keweenaw Bay, Whitefish Bay, and the Big and Little Bays De Noc are the principal indentations on the Upper Peninsula. The Grand and Little Traverse, Thunder, and Saginaw bays indent the Lower Peninsula. After Alaska, Michigan has the longest shoreline of any state, 3,288 miles (5,292 km). An additional 1,056 miles (1,699 km) can be added if islands are included. This roughly equals the length of the Atlantic Coast from Maine to Florida.

The state has numerous large islands, the principal ones being the Manitou, Beaver, and Fox groups in Lake Michigan; Isle Royale and Grande Isle in Lake Superior; Drummond, Marquette, Bois Blanc, and Mackinac islands in Lake Huron; and Neebish and Sugar islands in St. Mary's River. Michigan has about 150 lighthouses, the most of any U.S. state. The first lighthouses in Michigan were built between 1818 and 1822. They were built to project light at night and to serve as a landmark during the day to safely guide the passenger ships and freighters traveling the Great Lakes. See Lighthouses in the United States.

The state's rivers are small, short and shallow, and few are navigable. The principal ones include the Au Sable, Thunder Bay, Cheboygan, and Saginaw, all of which flow into Lake Huron; the Ontonagon, and Tahquamenon, which flow into Lake Superior; and the St. Joseph, Kalamazoo, Grand, Muskegon, Manistee, and Escanaba, which flow into Lake Michigan. The state has 11,037 inland lakes and 38,575 square miles (99,909 km2) of Great Lakes waters and rivers in addition to 1,305 square miles (3,380 km2) of inland water. No point in Michigan is more than 6 miles (9.7 km) from an inland lake or more than 85 miles (137 km) from one of the Great Lakes. [3]

Michigan has a humid continental climate, although there are two distinct regions. The southern and central parts of the Lower Peninsula (south of Saginaw Bay and from the Grand Rapids area southward) have a warmer climate ( Köppen climate classification Dfa) with hot summers and cold winters. The northern part of the Lower Peninsula and the entire Upper Peninsula has a more severe climate (Köppen Dfb), with warm, but shorter summers and longer, cold to very cold winters. Some parts of the state average high temperatures below freezing from December through February, and into early March in the far northern parts. During the winter through the middle of February the state is frequently subjected to heavy lake-effect snow. The state averages from 30-40 inches (75–100 cm) of precipitation annually.

The entire state averages 30 days of thunderstorm activity per year. These can be severe, especially in the southern part of the state. The state averages 17 tornadoes per year, which are more common in the extreme southern portion of the state. Portions of the southern border have been nearly as vulnerable historically as parts of Tornado Alley. Farther north, in the Upper Peninsula, tornadoes are rare. [4] 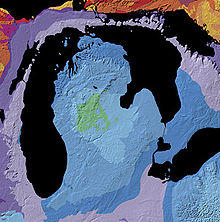 Geologic map of the Michigan Basin.

The soil is of a varied composition and in large areas is very fertile, especially in the south. However, the Upper Peninsula for the most part is rocky and mountainous, and the soil is unsuitable for agriculture. The climate is tempered by the proximity of the lakes and is much milder than in other locales with the same latitude.