Geosynchronous Satellite Launch Vehicle (GSLV), is an expendable launch system operated by the Indian Space Research Organisation (ISRO). GSLV was used in thirteen launches from 2001 to 2018, with more launches planned. Even though GSLV Mk III shares the name, it is an entirely different launcher.

The Geosynchronous Satellite Launch Vehicle (GSLV) project was initiated in 1990 with the objective of acquiring an Indian launch capability for geosynchronous satellites. [7] [8]

GSLV uses major components that are already proven in the Polar Satellite Launch Vehicle (PSLV) launchers in the form of the S125/S139 solid rocket booster and the liquid-fueled Vikas engine. Due to the thrust required for injecting the satellite in a GTO orbit the third stage was to be powered by a LOX/ LH2 Cryogenic engine which at that time India did not possess or had the technology know-how to build one.

The first development flight of the GSLV (Mk.I configuration) was launched on 18 April 2001 was a failure as the payload failed to reach the intended orbit parameters. The launcher was declared operational after the second development flight successfully launched the GSAT-2 satellite. During the initial years from the initial launch to 2014 the launcher had a checkered history with only 2 successful launches out of 7. [9] [10]

The third stage was to be procured from Russian company Glavcosmos, including transfer of technology and design details of the engine based on an agreement signed in 1991. [8] Russia backed out of the deal after US objected to the deal as in violation of the Missile Technology Control Regime (MTCR) May 1992. As a result, ISRO initiated the Cryogenic Upper Stage Project in April 1994 and began developing its own cryogenic engine. [11] A new agreement was signed with Russia for 7 KVD-1 cryogenic stages and 1 ground mock-up stage with no technology transfer, instead of 5 cryogenic stages along with the technology and design as per the earlier agreement. [12] These engines were used for the initial flights and were named GSLV Mk.1. [13] 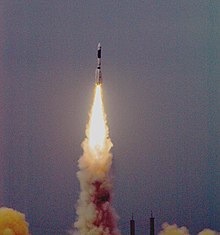 The 49 metres (161 ft) tall GSLV, with a lift-off mass of 415 metric tons (915,000 lb), is a three-stage vehicle with solid, liquid and cryogenic stages respectively. The payload fairing, which is 7.8 metres (26 ft) long and 3.4 metres (11 ft) in diameter, protects the vehicle electronics and the spacecraft during its ascent through the atmosphere. It is discarded when the vehicle reaches an altitude of about 115 km. [14]

The first GSLV flight, GSLV-D1 used the L40 stage. Subsequent flights of the GSLV used high pressure engines in the strap-on boosters called the L40H. [15] The GSLV uses four L40H liquid strap-on boosters derived from the L37.5 second stage, which are loaded with 42.6 tons of hypergolic propellants ( UDMH & N2O4). The propellants are stored in tandem in two independent tanks 2.1 metres (6 ft 11 in) diameter. The engine is pump-fed and generates 760 kilonewtons (170,000 lbf) of thrust, with a burn time of 150 seconds.

The third stage of the GSLV Mk.II is propelled by the Indian CE-7.5 cryogenic rocket engine while the older defunct Mk.I is propelled using a Russian made KVD-1. It uses liquid hydrogen (LH2) and liquid oxygen (LOX) [18] The Indian cryogenic engine was built at the Liquid Propulsion Systems Centre [19] [20] The engine has a default thrust of 75 kilonewtons (17,000 lbf) but is capable of a maximum thrust of 93.1 kilonewtons (20,900 lbf).

The first developmental flight of GSLV Mk I had a 129 tonne (S125) first stage and was capable of launching around 1500 kg into geostationary transfer orbit. The second developmental flight replaced the S125 stage with S139. It used the same solid motor with 138 tonne propellant loading. The chamber pressure in all liquid engines were enhanced, enabling a higher propellant mass and burn time. These improvements allowed GSLV to carry an additional 300 kg of payload. [22] [23] The fourth operational flight of GSLV Mk I, GSLV-F06, has a 15 tonne propellant loading in the third stage, called the C-15. [24]

For launches from 2018 a 6% increased thrust version of the Vikas engine was developed. It was demonstrated on 29 March 2018 in the GSAT 6A launch second stage. It will be used for the four Vikas engines first stage boosters on future missions. [26]