Frank Philip Stella (born May 12, 1936) is an American painter, sculptor and printmaker, noted for his work in the areas of minimalism and post-painterly abstraction. [1] Stella lives and works in New York City.

Frank Stella was born in Malden, Massachusetts, [2] to parents of Italian descent. His father was a gynecologist, and his mother was an artistically inclined housewife who attended a fashion school and later took up landscape painting. [3]

After attending high school at Phillips Academy in Andover, Massachusetts, where he learned about abstract modernists Josef Albers and Hans Hofmann, [4] he attended Princeton University, where he majored in history and met Darby Bannard and Michael Fried. Early visits to New York art galleries fostered his artistic development, and his work was influenced by the abstract expressionism of Jackson Pollock and Franz Kline. [5] Stella moved to New York in 1958, after his graduation. He is heralded for creating abstract paintings that bear no pictorial illusions or psychological or metaphysical references in twentieth-century painting. [6]

As of 2015, Stella lives in Greenwich Village and keeps an office there but commutes on weekdays to his studio in Rock Tavern, New York. [3]

Upon moving to New York City, he reacted against the expressive use of paint by most painters of the abstract expressionist movement, instead finding himself drawn towards the "flatter" surfaces of Barnett Newman's work and the "target" paintings of Jasper Johns. He began to produce works which emphasized the picture-as-object, rather than the picture as a representation of something, be it something in the physical world, or something in the artist's emotional world. Stella married Barbara Rose, later a well-known art critic, in 1961. Around this time he said that a picture was "a flat surface with paint on it – nothing more". This was a departure from the technique of creating a painting by first making a sketch. Many of the works are created by simply using the path of the brush stroke, very often using common house paint.

This new aesthetic found expression in a series of new paintings, the Black Paintings (1959) in which regular bands of black paint were separated by very thin pinstripes of unpainted canvas. Die Fahne Hoch! (1959) is one such painting. It takes its name ("The Raised Banner" in English) from the first line of the Horst-Wessel-Lied, the anthem of the National Socialist German Workers Party, and Stella pointed out that it is in the same proportions as banners used by that organization. It has been suggested that the title has a double meaning, referring also to Jasper Johns' paintings of flags. In any case, its emotional coolness belies the contentiousness its title might suggest, reflecting this new direction in Stella's work. Stella's art was recognized for its innovations before he was twenty-five. In 1959, several of his paintings were included in "Three Young Americans" at the Allen Memorial Art Museum at Oberlin College, as well as in "Sixteen Americans" at the Museum of Modern Art in New York (60).

From 1960 Stella began to produce paintings in aluminium and copper paint which, in their presentation of regular lines of color separated by pinstripes, are similar to his black paintings. However they use a wider range of colors, and are his first works using shaped canvases (canvases in a shape other than the traditional rectangle or square), often being in L, N, U or T-shapes. These later developed into more elaborate designs, in the Irregular Polygon series (67), for example.

Also in the 1960s, Stella began to use a wider range of colors, typically arranged in straight or curved lines. Later he began his Protractor Series (71) of paintings, in which arcs, sometimes overlapping, within square borders are arranged side-by-side to produce full and half circles painted in rings of concentric color. These paintings are named after circular cities he had visited while in the Middle East earlier in the 1960s. The Irregular Polygon canvases and Protractor series further extended the concept of the shaped canvas.

Stella began his extended engagement with printmaking in the mid-1960s, working first with master printer Kenneth Tyler at Gemini G.E.L. Stella produced a series of prints during the late 1960s starting with a print called Quathlamba I in 1968. Stella's abstract prints used lithography, screenprinting, etching and offset lithography.

In 1967, he designed the set and costumes for Scramble, a dance piece by Merce Cunningham. The Museum of Modern Art in New York presented a retrospective of Stella's work in 1970, making him the youngest artist to receive one.[ citation needed] During the following decade, Stella introduced relief into his art, which he came to call "maximalist" painting for its sculptural qualities. The shaped canvases took on even less regular forms in the Eccentric Polygon series, and elements of collage were introduced, pieces of canvas being pasted onto plywood, for example. His work also became more three-dimensional to the point where he started producing large, free-standing metal pieces, which, although they are painted upon, might well be considered sculpture. After introducing wood and other materials in the Polish Village series (73), created in high relief, he began to use aluminum as the primary support for his paintings. As the 1970s and 1980s progressed, these became more elaborate and exuberant. Indeed, his earlier Minimalism [more] became baroque, marked by curving forms, Day-Glo colors, and scrawled brushstrokes. Similarly, his prints of these decades combined various printmaking and drawing techniques. In 1973, he had a print studio installed in his New York house. In 1976, Stella was commissioned by BMW to paint a BMW 3.0 CSL for the second installment in the BMW Art Car Project. He has said of this project, "The starting point for the art cars was racing livery. In the old days there used to be a tradition of identifying a car with its country by color. Now they get a number and they get advertising. It's a paint job, one way or another. The idea for mine was that it's from a drawing on graph paper. The graph paper is what it is, a graph, but when it's morphed over the car's forms it becomes interesting, and adapting the drawing to the racing car's forms is interesting. Theoretically it's like painting on a shaped canvas."[ citation needed]

In 1969, Stella was commissioned to create a logo for the Metropolitan Museum of Art Centennial. Medals incorporating the design were struck to mark the occasion. [7] 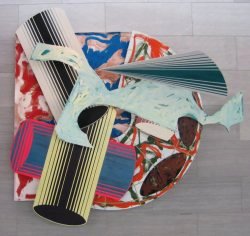 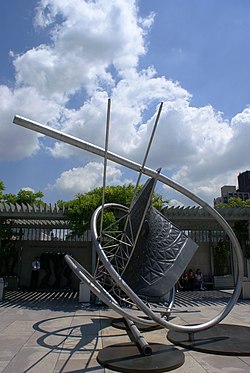 From the mid-1980s to the mid-1990s, Stella created a large body of work that responded in a general way to Herman Melville’s Moby-Dick. [8] During this time, the increasingly deep relief of Stella's paintings gave way to full three-dimensionality, with sculptural forms derived from cones, pillars, French curves, waves, and decorative architectural elements. To create these works, the artist used collages or maquettes that were then enlarged and re-created with the aids of assistants, industrial metal cutters, and digital technologies. [8] La scienza della pigrizia (The Science of Laziness), from 1984, is an example of Stella's transition from two-dimensionality to three-dimensionality. It is fabricated from oil paint, enamel paint, and alkyd paint on canvas, etched magnesium, aluminum and fiberglass.

In the 1990s, Stella began making free-standing sculpture for public spaces and developing architectural projects. In 1993, for example, he created the entire decorative scheme for Toronto’s Princess of Wales Theatre, which includes a 10,000-square-foot mural. His 1993 proposal for a Kunsthalle and garden in Dresden did not come to fruition. In 1997, he painted and oversaw the installation of the 5,000-square-foot "Stella Project" which serves as the centerpiece of the theater and lobby of the Moores Opera House located at the Rebecca and John J. Moores School of Music on the campus of the University of Houston, in Houston, TX. [9] [10] His aluminum bandshell, inspired by a folding hat from Brazil, was built in downtown Miami in 2001; a monumental Stella sculpture was installed outside the National Gallery of Art in Washington, D.C.

Stella's wall-hung Scarlatti K Series was triggered by the harpsichord sonatas of Domenico Scarlatti and the writings of the U.S. 20th-century harpsichord virtuoso and musicologist Ralph Kirkpatrick, who made the sonatas widely known. (The title's "K" refers to Kirkpatrick's chronology numbers.) Scarlatti wrote more than 500 keyboard sonatas; Stella's series today includes about 150 works. [11]

From 1978 to 2005, Stella owned the Van Tassell and Kearney Horse Auction Mart building in Manhattan's East Village and used it as his studio. His nearly 30-year stewardship of the building resulted in the facade being cleaned and restored. [12] After a six-year campaign by the Greenwich Village Society for Historic Preservation, in 2012 the historic building was designated a New York City Landmark. [13] After 2005, Stella split his time between his West Village apartment and his Newburgh, New York studio. [14]

Stella had been an advocate of strong copyright protection for artists such as himself. On June 6, 2008, Stella (with Artists Rights Society president Theodore Feder; Stella is a member artist of the Artists Rights Society [15]) published an Op-Ed for The Art Newspaper decrying a proposed U.S. Orphan Works law which "remove[s] the penalty for copyright infringement if the creator of a work, after a diligent search, cannot be located."

In the Op-Ed, Stella wrote,

The Copyright Office presumes that the infringers it would let off the hook would be those who had made a "good faith, reasonably diligent" search for the copyright holder. Unfortunately, it is totally up to the infringer to decide if he has made a good faith search. Bad faith can be shown only if a rights holder finds out about the infringement and then goes to federal court to determine whether the infringer has failed to conduct an adequate search. Few artists can afford the costs of federal litigation: attorneys’ fees in our country vastly exceed the licensing fee for a typical painting or drawing. The Copyright Office proposal would have a disproportionately negative, even catastrophic, impact on the ability of painters and illustrators to make a living from selling copies of their work... It is deeply troubling that government should be considering taking away their principal means of making ends meet—their copyrights. [16]

Stella's work was included in several exhibitions in the 1960s, among them the Solomon R. Guggenheim Museum’s The Shaped Canvas (1965) and Systemic Painting (1966).[ citation needed] The Museum of Modern Art in New York presented a retrospective of Stella's work in 1970. [8] His art has since been the subject of several retrospectives in the United States, Europe, and Japan. In 2012, a retrospective of Stella's career was shown at the Kunstmuseum Wolfsburg. [17]

In 2014, Stella gave his sculpture Adjoeman (2004) as a long-term loan to Cedars-Sinai Medical Center in Los Angeles. [19]The Menil Collection, Houston; the Hirshhorn Museum and Sculpture Garden, Washington, D.C.; San Francisco Museum of Modern Art; National Gallery of Art; the Toledo Museum of Art and the Whitney Museum of American Art, New York; the Portland Art Museum, Oregon; and many others.

Among the many honors he has received was an invitation from Harvard University to give the Charles Eliot Norton Lectures in 1984. Calling for a rejuvenation of abstraction by achieving the depth of baroque painting, [20] these six talks were published by Harvard University Press in 1986 under the title Working Space. [21]

In 2009, Frank Stella was awarded the National Medal of Arts by President Barack Obama. [22] In 2011, he received the Lifetime Achievement Award in Contemporary Sculpture by the International Sculpture Center. In 1996 he received an honorary Doctorate from the University of Jena in Jena, (Germany), where his large sculptures of the "Hudson River Valley Series" are on permanent display, becoming the second artist to receive this honorary degree after Auguste Rodin in 1906. [23]