The Mandan Indian tribe established a village at the confluence of the Missouri and Heart rivers in about 1575. [3] They built earth lodges and thrived in their community by hunting bison and growing a number of crops. Two hundred years later, an outbreak of smallpox significantly decreased the Mandan population and the survivors resettled to the north. [3] In June 1872, at the same location where the Mandan tribe had established their village, a military post named Fort McKeen was built by two companies of the 6th U.S. Infantry under Lt. Col. Daniel Huston, Jr., opposite Bismarck, Dakota Territory. [4] 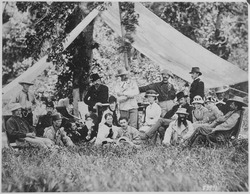 The three-company infantry post's name was changed to Fort Abraham Lincoln on November 19, 1872, and expanded to the south to include a cavalry post accommodating six companies. Among the 78 permanent wooden structures at Fort Lincoln were a post office, telegraph office, barracks for nine companies, seven officer’s quarters, six cavalry stables, a guardhouse, granary, quartermaster storehouse, bakery, hospital, laundress quarters, and log scouts' quarters. Water was supplied to the fort by being hauled from Missouri River in wagons, while wood was supplied by contract.

By 1873, the 7th Cavalry moved into the fort to ensure the expansion of the Northern Pacific Railway. The first post commander of the expanded fort was Lieutenant Colonel George A. Custer, who held the position until his death in 1876.

In 1876, the Army departed from here as part of the Great Sioux War of 1876-77, resulting in Custer's defeat at the Battle of the Little Bighorn, where they were to push the non-treaty Indians back to their particular reservations. Custer along with about half of his troops did not return to Fort Lincoln. The Fort was abandoned in 1891 after the completion of the railroad to Montana in 1883. A year after the fort was abandoned; local residents disassembled the fort for its nails and wood. In 1895, a new Fort Lincoln was built across the river near Bismarck. In 1907, President Theodore Roosevelt signed the deed to the original fort's land over to the state as Fort Abraham Lincoln State Park. [5]

In 1934, the Civilian Conservation Corps built a visitor center, shelters, and roads. They also reconstructed military blockhouses and placed cornerstones to mark where fort buildings once stood, as well as replicating Mandan earthen lodges. Additional reproductions have since been built on the site, creating a replica Mandan village, called "On-a-Slant Village." A reproduction of Custer's house was built in the park in 1989, in time for the state of North Dakota's centennial celebration.

On-A-Slant Mandan Village (Mandan: Miti-ba-wa-esh) was established in the late 16th century and was inhabited until c. 1781. During those years the Mandan tribe had between seven and nine villages (all located along the Missouri River), with an estimated total population of 10,000 to 15,000. On-a-Slant was the furthest south of all these villages and consisted of approximately 86 earth lodges. Its population was about 1,000–1,500. It was located near the point where the Heart River and the Missouri River come together and was named so by the Mandan because the village was built on ground that slopes towards the river valley. It was fortified with a ditch and palisade, to protect its wealth of food and trade goods. [6] The women of the Mandan tribe were responsible for building the earth lodges, which were held up by a frame of cottonwood logs and covered with layers of willow branches, grass, and earth. These thick walls insulated the lodge effectively in both summer and winter. The top center of the earth lodge contained a hole to let out smoke from the fire pit and to let in sunlight. The earth lodges were placed close together with all entrances facing towards the village plaza in the center. Each lodge housed about ten to fifteen members of the immediate and extended family. The Mandan tribe lived on farming and hunting. The village became a center of trading because the Mandan were known for their ability to make pottery and prepare animal skins. In 1781, a smallpox epidemic ravaged the Mandan tribe, killing off a majority of the villagers. The famous Mandan chief Mato-tope or Four Bears (c. 1784-1837) grew up here. His father was village chief Good Boy. [7] The remaining tribe members moved north to join the Hidatsa tribe along the Knife River.

Lieutenant Colonel George Armstrong Custer and his wife, Libbie, lived on Fort Abraham Lincoln from 1873 until Custer died at the Battle of the Little Big Horn in the summer of 1876. Approximately 500 troops were also stationed there. Custer's first home at the fort was built in the summer of 1873, but it burned down in February 1874. Today the house and seven other major fort buildings, including a barracks, the fort's makeshift theater, a stable building, and several blockhouses, have been rebuilt.

Fort Lincoln Park offers living history tours of the Custer House every half-hour. The tour is roughly thirty minutes long and takes you back to the year 1875 when Custer and his wife were living at Fort Abraham Lincoln. The guides are dressed either as laundresses or soldiers from 1875. Interpretive tours of On-A-Slant Village and the earth lodges, in which the guides give a basic introduction to Mandan culture, are also offered every half-hour and are also about thirty minutes long. Along with the tours, there is an historical museum comprising On-A-Slant Village, Fort Abraham Lincoln, and Fort Lincoln State Park culture and history. Visitors are welcome to walk through the cavalry barracks, the stables, and the blockhouses. A giftshop and coffeeshop have been built in the re-constructed commissary storehouse. During the summers, melodramas, including ones originally performed at Fort Lincoln in the 1870s, are performed by the guides in the re-built granary. The park also has 95 campsites, two sleeping cabins, and picnic shelters. Horseback tours, hiking, fishing, and playgrounds are also available.