During the Civil War, Minnesota had 11 infantry regiments, each with their own flag. The flags usually consisted of a blue background with an American Eagle or the state seal with a scroll, shown in the flags of the First, Second, Fourth, and Fifth regiment. Some have speculated that this design influenced the design of Amelia Hyde Center. [3]

Because Minnesota was sponsoring an exhibition at the 1893 Chicago World's Fair, the then-current governor of Minnesota, William Merriam, appointed an all-male board to supervise the preparations. However, a group known as the Women's Auxiliary Board took over the 'women's work' and created a six-person committee to design the state flag. The boards then held a contest to design the flag, and 200 entries were submitted. The winner of the contest was Amelia Hyde Center, who received $15 for her winning design. [3] Center's design was white on one side and light blue on the other. In the center was the state seal wreathed with white moccasin flowers, on a blue field. A red ribbon in the seal bore a motto, L'Étoile du Nord (French for "The Star of the North"). The years 1819 (establishment of Fort Snelling), 1858 (statehood), and 1893 (adoption of the flag) appeared in gold around the state seal. "Minnesota" was written under the state seal in gold and 19 gold stars arranged in clusters to form the points of a star, representing the fact that Minnesota was the 19th state to be admitted after the original 13 states. [4] The first Minnesota flag was made of silk and was embroidered by Pauline and Thomane Fjelde, who won a gold medal for their creation.The flag was adopted on April 4, 1893. [2]

The flag was redesigned in 1957 for the 1958 state centennial, eliminating the different-colored sides in favor of a royal blue field on both sides to save on manufacturing costs and to make the flag more durable, especially in high winds. [2] [4] This opportunity was used to correct an error of the flowers used on the seal; instead of a Pink and White Lady's Slipper, the 1893 flag showed a variant that was not native to the state. [5]

In 1983, the state seal was changed, and the flag also changed to reflect that. The background color was also lightened from a royal blue to a medium blue. [2] 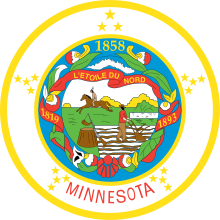 The design of the Minnesota flag consists of a version of the state seal on a blue background.

Design and symbolism of the seal

A Native American rides on horseback in the background, symbolizing Minnesota's Native American heritage. In a field in the foreground, a farmer plows a field, while his axe, gun, and powder horn rest on a stump nearby. The field and plow represent the importance of agriculture. The tools used by the Native American and the farmer represent the tools used for labor and hunting in the past, while the stump represents the importance of lumber in Minnesota's history. Next to the field, a river and waterfall symbolize the Mississippi River and St. Anthony Falls. Three pine trees in the background represent the pine regions of St. Croix, Mississippi, and Lake Superior. [6] [7]

Design and symbolism of the flag

The flag is rectangular, and consists of a design on a medium blue background. According to the official statute, the flag contains a thin gold border and gold fringe, however, this is rarely used. A white circle in the center contains the word MINNESOTA across the bottom, four groups of four stars and one group of three stars spread out evenly around the edge, and designs from the state seal in the center. The star at the top symbolizes the North Star. The design in the center is surrounded by pink-and-white lady's slippers, the state flower. The border also contains the dates 1819 (founding of Fort Snelling), 1858 (date of statehood), and 1893 (adoption of first flag). [1]

The Minnesotan flag flying underneath the American flag.

The flag is to be flown over the Minnesota State Capitol from sunset to sunrise.

When folding the flag for presentation or display, it must be folded lengthwise four times, then each side must be folded down so that the banner containing "L'Etoile du Nord" is displayed on a triangle. The ends below the triangle must be folded in a complicated way to form a triangle that is then tucked into the upper triangle so that the state motto is prominently displayed on the front. Some have described the method as being too overly complicated. [8] When the flag is folded for storage, it should be folded in the same way as the national flag. [1]

In Minnesota, mutilating, defiling, or casting contempt upon the state flag, attaching any design to the flag, or using the flag for advertising are misdemeanor offenses under State Statute 609.40, excepting flags on written or printed documents. [9]

The law creating the 1957 state flag is located in Chapter 1 of the Official State Statutes. The chapter covers state symbols, sovereignty and other general issues. The location of the flag in the statutes is Section 1.141. The statute covers the adoption and description of the official flag, as well as the hours of flying and the method of folding the flag. The statute also requires the Secretary of State to keep a photograph of the official state flag and samples so they can be used by the public to make copies. [1]

The North Star flag, designed by vexillologists Rev. William Becker and Mr. Lee Herold. The flag uses the green, white, and blue that traditionally represent Minnesota, while the star comes from Minnesota's nickname, "The Star of the North". [10]

The Minnesota flag has been widely criticized for bad design and being overly complex. On numerous occasions, bills have been introduced in the Minnesota Legislature to establish a legislative task force for studying changes to the flag. [11]

In 2001, the Minnesotan flag was chosen as one of the ten worst flag designs in an online poll conducted by the North American Vexillological Association. The survey consisted of 100 NAVA members and 300 members of the public. Minnesota received a score of 3.13 on a scale of 1 to 10, on par with other flags that consisted of the state seal on a blue background, which were ranked very unfavorably. [12]

In 1989, vexillologists Rev. William Becker and Mr. Lee Herold proposed an alternative to the Minnesota state flag known as the North Star Flag. The design consists of a blue background with a yellow five-pointed star, and green and white wavy horizontal stripes. The star represents "L'etoile du Nord" and Minnesota's natural wealth, the blue background represents Minnesota's lakes and rivers, the white represents winter, and the green represents farmland and forests. The waves represent the name Minnesota, a Dakota word which means "sky-tinted waters". [10] The flag was the winner of an unofficial contest by the St. Paul Pioneer Press to design a new state flag, as well as being widely endorsed by state politicians and newspapers, including the Star Tribune and St. Paul Pioneer Press. [10]:Endorsements

In March 2017, Guy Johnson, a resident of Saint Paul, started a petition on Change.org to change the Minnesota state flag, calling it "shameful" due to its "unoriginality and laziness". As of February 2018 [update], the petition has received 400 signatures. The petition also offers nine alternatives that came from Reddit's vexillological community. [13]