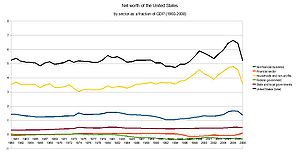 Projection of US federal debt as a percentage of GDP 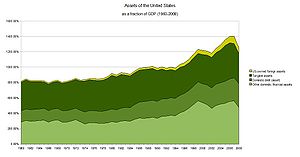 Federal Deficits as a percent of GDP

The U.S. increased the ratio of public and private debt from 152% GDP in 1980 to peak at 296% GDP in 2008, before falling to 279% GDP by Q2 2011. The 2009-2011 decline was due to foreclosures and increased rates of household saving. There were significant declines in debt to GDP in each sector except the government, which ran large deficits to offset deleveraging or debt reduction in other sectors. [2]

As of 2009, there was $50.7 trillion of debt owed by US households, businesses, and governments, representing more than 3.5 times the annual gross domestic product of the United States. [3] As of the first quarter of 2010, domestic financial assets [b] totaled $131 trillion and domestic financial liabilities $106 trillion. [4] Tangible assets in 2008 (such as real estate and equipment) for selected sectors [c] totaled an additional $56.3 trillion. [6]

Net worth (or equity)

Some figures are missing land and nonproduced nonfinancial assets.

Gross domestic assets, and related gain (or loss), at end of 2011 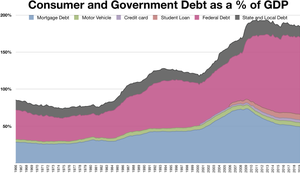 The Federal Reserve issues routine reports on the flows and levels of debt in the United States. As of the first quarter of 2010, the Federal Reserve estimated that total public and private debt owed by American households, businesses, and government totaled $50 trillion, or roughly $175,000 per American and 3.5 times GDP. [13]

Interest payments on debt by US households, businesses, governments, and nonprofits totaled $3.29 trillion in 2008. The financial sector paid an additional $178.6 billion in interest on deposits. [14]

In April 2011, International Monetary Fund said that, "The US lacks a "credibility strategy" to stabilise its mounting public debt, posing a small but significant risk of a new global economic crisis. [15]

Bonds and GSE/federal agency-backed issues represent all but 12% of financial sector debt in 2009. [16]

In 2016, state and local governments owed $3 trillion and have another $5 trillion in unfunded liabilities. [21]

The amount of US debt, measured as a percentage of GDP, held by the public over time.

Interest on the federal debt

A timeline showing projected debt milestones from the CBO.

Since 2010, the U.S. Treasury has been obtaining negative real interest rates on government debt. [28] Such low rates, outpaced by the inflation rate, occur when the market believes that there are no alternatives with sufficiently low risk, or when popular institutional investments such as insurance companies, pensions, or bond, money market, and balanced mutual funds are required or choose to invest sufficiently large sums in Treasury securities to hedge against risk. [29] [30] Lawrence Summers, Matthew Yglesias and other economists state that at such low rates, government debt borrowing saves taxpayer money, and improves creditworthiness. [31] [32] In the late 1940s through the early 1970s, the US and UK both reduced their debt burden by about 30% to 40% of GDP per decade by taking advantage of negative real interest rates, but there is no guarantee that government debt rates will continue to stay so low. [29] [33] In January, 2012, the U.S. Treasury Borrowing Advisory Committee of the Securities Industry and Financial Markets Association unanimously recommended that government debt be allowed to auction even lower, at negative absolute interest rates. [34]

Figures of total debt typically do not include other financial obligations such as derivatives. Partly this is due to the complexities of quantifying derivatives – the United States Comptroller of the Currency reports derivative contracts in terms of notional value, [35] net current credit exposure, [36] and fair value, [37] among others.

The number commonly used by the media is notional value, which is a base value used to determine the size of the cash flows exchanged in the contract. [38] Fair value (or market value) is the value of the contract either on the open market or as it is appraised by accountants. Fair value can be positive or negative depending on the side of the contract the party is on. [37] Credit exposure is defined as the net loss which holders of derivatives would suffer if their counterparties in those derivatives contracts defaulted. [36]

The notional value of derivative contracts held by US financial institutions is $216.5 trillion, or more than 15 times US GDP. [35]

Derivatives contracts are overwhelmingly held by large financial institutions. The five largest US banks hold 97% of derivatives by notional value; the top 25 hold nearly 100%. [39] Banks currently hold collateral against their derivative exposures amounting to 67% of their net current credit exposure. [40]

Foreign holdings of US assets are concentrated in debt. Americans own more foreign equity and foreign direct investment than foreigners own in the United States, but foreigners hold nearly four times as much US debt as Americans hold in foreign debt.

Sectoral financial balances in U.S. economy 1990-2012. By definition, the three balances must net to zero. Since 2009, the U.S. capital surplus and private sector surplus have driven a government budget deficit.

Economist Martin Wolf explained in July 2012 that government fiscal balance is one of three major financial sectoral balances in the U.S. economy, the others being the foreign financial sector and the private financial sector. The sum of the surpluses or deficits across these three sectors must be zero by definition. In the U.S., a foreign financial surplus (or capital surplus) exists because capital is imported (net) to fund the trade deficit. Further, there is a private sector financial surplus due to household savings exceeding business investment. By definition, there must therefore exist a government budget deficit so all three net to zero. The government sector includes federal, state and local. For example, the government budget deficit in 2011 was approximately 10% GDP (8.6% GDP of which was federal), offsetting a capital surplus of 4% GDP and a private sector surplus of 6% GDP. [45]

Wolf argued that the sudden shift in the private sector from deficit to surplus forced the government balance into deficit, writing: "The financial balance of the private sector shifted towards surplus by the almost unbelievable cumulative total of 11.2 per cent of gross domestic product between the third quarter of 2007 and the second quarter of 2009, which was when the financial deficit of US government (federal and state) reached its peak...No fiscal policy changes explain the collapse into massive fiscal deficit between 2007 and 2009, because there was none of any importance. The collapse is explained by the massive shift of the private sector from financial deficit into surplus or, in other words, from boom to bust." [45]

Economist Paul Krugman also explained in December 2011 the causes of the sizable shift from private deficit to surplus: "This huge move into surplus reflects the end of the housing bubble, a sharp rise in household saving, and a slump in business investment due to lack of customers." [46]

Derivatives, the great unknown with respect to its impact on the total US cumulative debt

FINANCIAL POSITION OF THE UNITED STATES