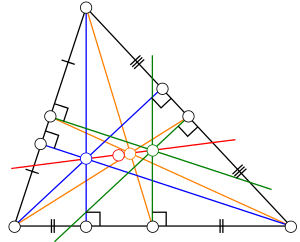 Euler's line (red) is a straight line through the centroid (orange), orthocenter (blue), circumcenter (green) and center of the nine-point circle (red).

The concept of a triangle's Euler line extends to the Euler line of other shapes, such as the quadrilateral and the tetrahedron.

Triangle centers on the Euler line

Euler showed in 1765 that in any triangle, the orthocenter, circumcenter and centroid are collinear. [2] This property is also true for another triangle center, the nine-point center, although it had not been defined in Euler's time. In equilateral triangles, these four points coincide, but in any other triangle they are all distinct from each other, and the Euler line is determined by any two of them.

be a triangle. A proof of the fact that the circumcenter

are collinear relies on free vectors. We start by stating the prerequisites. First,

This follows from the fact that the absolute barycentric coordinates of

. Further, the problem of Sylvester [7] reads as

Now, using the vector addition, we deduce that

By adding these three relations, term by term, we obtain that

, and so the three points

(in this order) are collinear.

The segment GH is a diameter of the orthocentroidal circle.

The center N of the nine-point circle lies along the Euler line midway between the orthocenter and the circumcenter: [1]

Thus the Euler line could be repositioned on a number line with the circumcenter O at the location 0, the centroid G at 2t, the nine-point center at 3t, and the orthocenter H at 6t for some scale factor t.

Furthermore, the squared distance between the centroid and the circumcenter along the Euler line is less than the squared circumradius R2 by an amount equal to one-ninth the sum of the squares of the side lengths a, b, and c: [6]:p.71

Let A, B, C denote the vertex angles of the reference triangle, and let x : y : z be a variable point in trilinear coordinates; then an equation for the Euler line is

An equation for the Euler line in barycentric coordinates

Another way to represent the Euler line is in terms of a parameter t. Starting with the circumcenter (with trilinear coordinates

every point on the Euler line, except the orthocenter, is given by the trilinear coordinates

formed as a linear combination of the trilinears of these two points, for some t.

In a Cartesian coordinate system, denote the slopes of the sides of a triangle as

and denote the slope of its Euler line as

. Then these slopes are related according to [9]:Lemma 1

Moreover, the Euler line is parallel to an acute triangle's side BC if and only if [9]:p.173

The locus of the centroids of equilateral triangles inscribed in a given triangle is formed by two lines perpendicular to the given triangle's Euler line. [10]:Coro. 4

In a right triangle, the Euler line coincides with the median to the hypotenuse—that is, it goes through both the right-angled vertex and the midpoint of the side opposite that vertex. This is because the right triangle's orthocenter, the intersection of its altitudes, falls on the right-angled vertex while its circumcenter, the intersection of its perpendicular bisectors of sides, falls on the midpoint of the hypotenuse.

The Euler line of an automedian triangle (one whose medians are in the same proportions, though in the opposite order, as the sides) is perpendicular to one of the medians. [11]

Consider a triangle ABC with Fermat–Torricelli points F1 and F2. The Euler lines of the 10 triangles with vertices chosen from A, B, C, F1 and F2 are concurrent at the centroid of triangle ABC. [12]

The Euler lines of the four triangles formed by an orthocentric system (a set of four points such that each is the orthocenter of the triangle with vertices at the other three points) are concurrent at the nine-point center common to all of the triangles. [6]:p.111

In a convex quadrilateral, the quasiorthocenter H, the "area centroid" G, and the quasicircumcenter O are collinear in this order on the Euler line, and HG = 2GO. [13]

Main article: Tetrahedron § Properties analogous to those of a triangle

A tetrahedron is a three-dimensional object bounded by four triangular faces. Seven lines associated with a tetrahedron are concurrent at its centroid; its six midplanes intersect at its Monge point; and there is a circumsphere passing through all of the vertices, whose center is the circumcenter. These points define the "Euler line" of a tetrahedron analogous to that of a triangle. The centroid is the midpoint between its Monge point and circumcenter along this line. The center of the twelve-point sphere also lies on the Euler line.

is a polygon. The Euler line

is sensitive to the symmetries of

in the following ways:

has a line of reflection symmetry

or a point on

has a center of rotational symmetry

have equal length, then

is orthogonal to the last side.

A triangle's Kiepert parabola is the unique parabola that is tangent to the sides (two of them extended) of the triangle and has the Euler line as its directrix. [15]:p. 63