Energy in Hawaii is complicated by the state's isolated location and lack of fossil fuel resources. The state relies heavily on imports of petroleum and coal for power although renewable energy is increasing. Hawaii has the highest share of petroleum use in the United States, with about 62% of electricity coming from oil in 2017. [1] As of 2016, 26.6% of electricity was from renewable sources, including solar, wind, hydro and geothermal. [2] 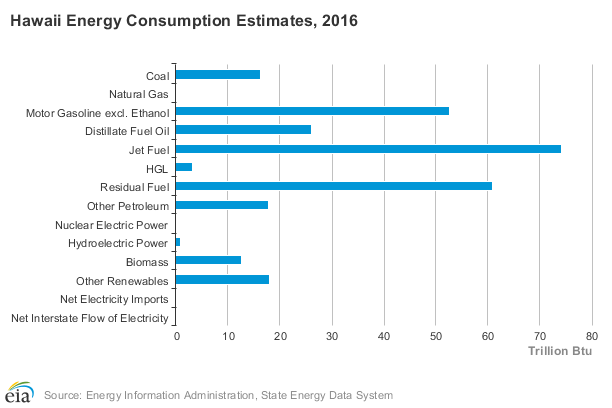 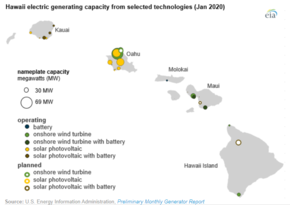 On January 28, 2008, the State of Hawaii and the US Department of Energy signed a memorandum of understanding [7] and announced the Hawaii Clean Energy Initiative, which has a goal to use renewable energy to supply 70 percent or more of Hawaii's energy needs by 2030. [8] [9]

The Initiative will focus on working with public and private partners on clean energy projects including: designing cost-effective approaches for 100 percent use of renewable energy on smaller islands, designing systems to improve stability of electrical grids operating with variable generating sources, such as wind power plants on the Island of Hawaii and Maui, and expanding Hawaii's capability to use locally grown crops as byproducts for producing fuel and electricity. [10]

Energy use by sector 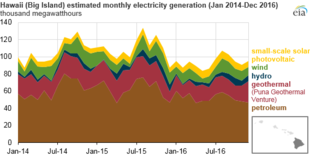 Sources of electricity on the Big Island.

95% of the population in Hawaii is supplied by Hawaiian Electric Industries. Kauai is instead supplied by the consumer-owned Kauai Island Utility Cooperative. As of 2018, the total dispatchable capacity is 1,727 MW, and the intermittent generation capacity is 588 MW. [13] Each island generates its own power. [14]

Most of the electricity in Hawaii is produced from oil.

Solar power in Hawaii grew quickly as photovoltaic panel prices dropped putting household energy generation below the cost of purchased electricity. In 2013, Hawaii was second only to Arizona in per capita solar power and about 10% of Oahu customers had solar panels. Several utility scale solar farms exist along with distributed household generation. In 2017, solar power produce 38.4% of the state's electricity[ citation needed].

The island of Kauai has an abundance of solar energy, and installed batteries to permit renewable energy to be used at night. [15] 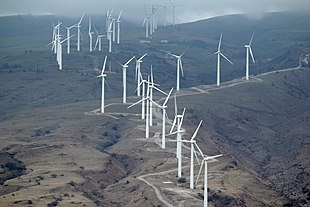 Hawaii has strong, consistent winds. Wind power in Hawaii generated 6.4% of total electricity generation in 2015. [5] Hawaii began research into wind power in the mid-1980s with a 340 kW turbine on Maui, the 2.3MW Lalamilo Wells wind farm on Oahu and the 9 MW Kamaoa wind farm on Hawaii Island. [16] The MOD-5B, a 3.2 MW wind turbine, on Oahu was the largest in the world in 1987. These early examples were all out of service by 2010. As of 2017 Hawaii has 114 commercial wind turbines in the state with a total capacity of 206 MW.

Hawaii has several biomass electric plants including the 10 MW Honolulu International Airport Emergency Power Facility, the 6.7 MW Green Energy Agricultural Biomass-to-Energy Facility on Kauai, and the 6.6 MW waste-to-energy Honua Power Project on Oahu. The 21.5 MW Hu Honua plant came online in 2016. [17] Wärtsilä sold Hawaii Electric to be installed at Schofield Barracks Army Base on Oahu in 2017. The plant can run on solid or gas fuels including biomass. [18]

The U.S. Navy and the University of Hawaii operate a Wave Energy Test Site in Kaneohe Bay. [22]

A pilot wave energy project Azura concluded a six week test in the north shore of Kaneohe Bay, Oahu in 2012.

The Puna Geothermal Venture was constructed on the island of Hawaii between 1989 and 1993. It operated until May 2018 when it was shut down due to the 2018 lower Puna eruption.

Cellana produces oil from algae at a 2.5 hectares (6.2 acres) research site at Kailua-Kona on Hawaii island. Microalgae have significant potential as an energy crop, with the levels of oil production per acre potentially far exceeding that of vegetable oil crops. Cellana (previously called HR BioPetroleum) worked with Royal Dutch Shell on a pilot facility to grow algae on land leased from the Natural Energy Laboratory of Hawaii Authority, which is located on the west shore of Hawaii island.