More than 50% of the world's languages are located in just eight countries (denoted in red on the map): India, Brazil, Mexico, Australia, Indonesia, Nigeria, Papua New Guinea and Cameroon. In such countries and around them are the areas that are the most linguistically diverse in the world (denoted in blue on the map). 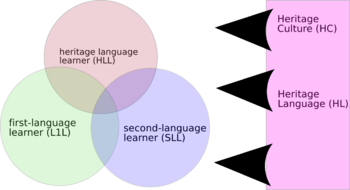 Language death can be the result of language shift in which ethnic group members no longer learn their heritage language as their first language.

An endangered language, or moribund language, is a language that is at risk of falling out of use as its speakers die out or shift to speaking other languages. Language loss occurs when the language has no more native speakers and becomes a " dead language". If no one can speak the language at all, it becomes an " extinct language". A dead language may still be studied through recordings or writings, but it is still dead or extinct unless there are fluent speakers. [1] Although languages have always become extinct throughout human history, they are currently dying at an accelerated rate because of globalization, imperialism, neocolonialism, [2] and linguicide (language killing). [3]

The first step towards language death is potential endangerment. This is when a language faces strong external pressure, but there are still communities of speakers who pass the language to their children. The second stage is endangerment. Once a language has reached the endangerment stage, there are only a few speakers left and children are, for the most part, not learning the language. The third stage of language extinction is seriously endangered. During this stage, a language is unlikely to survive another generation and will soon be extinct. The fourth stage is moribund, followed by the fifth stage extinction.

Many projects are under way aimed at preventing or slowing language loss by revitalizing endangered languages and promoting education and literacy in minority languages, often involving joint projects between language communities and linguists. [6] Across the world, many countries have enacted specific legislation aimed at protecting and stabilizing the language of indigenous speech communities. Recognizing that most of the world's endangered languages are unlikely to be revitalized, many linguists are also working on documenting the thousands of languages of the world about which little or nothing is known.

The total number of contemporary languages in the world is not known, and it is not well defined what constitutes a separate language as opposed to a dialect. Estimates vary depending on the extent and means of the research undertaken, and the definition of a distinct language and the current state of knowledge of remote and isolated language communities. The number of known languages varies over time as some of them become extinct and others are newly discovered. An accurate number of languages in the world was not yet known until the use of universal, systematic surveys in the later half of the twentieth century. [7] The majority of linguists in the early twentieth century refrained from making estimates. Before then, estimates were frequently the product of guesswork and very low. [8]

One of the most active research agencies is SIL International, which maintains a database, Ethnologue, kept up to date by the contributions of linguists globally. [9]

Ethnologue's 2005 count of languages in its database, excluding duplicates in different countries, was 6,912, of which 32.8% (2,269) were in Asia, and 30.3% (2,092) in Africa. [10] This contemporary tally must be regarded as a variable number within a range. Areas with a particularly large number of languages that are nearing extinction include: Eastern Siberia,[ citation needed] Central Siberia, Northern Australia, Central America, and the Northwest Pacific Plateau. Other hotspots are Oklahoma and the Southern Cone of South America.

While there is no definite threshold for identifying a language as endangered, UNESCO's 2003 document entitled Language vitality and endangerment [16] outlines nine factors for determining language vitality:

Many languages, for example some in Indonesia, have tens of thousands of speakers but are endangered because children are no longer learning them, and speakers are shifting to using the national language (e.g. Indonesian) in place of local languages. In contrast, a language with only 500 speakers might be considered very much alive if it is the primary language of a community, and is the first (or only) spoken language of all children in that community.

Asserting that "Language diversity is essential to the human heritage", UNESCO's Ad Hoc Expert Group on Endangered Languages offers this definition of an endangered language: "... when its speakers cease to use it, use it in an increasingly reduced number of communicative domains, and cease to pass it on from one generation to the next. That is, there are no new speakers, adults or children." [16]

UNESCO operates with four levels of language endangerment between "safe" (not endangered) and "extinct" (no living speakers), based on intergenerational transfer: "vulnerable" (not spoken by children outside the home), "definitely endangered" (children not speaking), "severely endangered" (only spoken by the oldest generations), and "critically endangered" (spoken by few members of the oldest generation, often semi-speakers). [4] UNESCO's Atlas of the World's Languages in Danger categorises 2,473 languages by level of endangerment. [17] More than 200 languages have become extinct around the world over the last three generations. [18]

Many scholars have devised techniques for determining whether languages are endangered. One of the earliest is GIDS (Graded Intergenerational Disruption Scale) proposed by Joshua Fishman in 1991. [20] In 2011 an entire issue of Journal of Multilingual and Multicultural Development was devoted to the study of ethnolinguistic vitality, Vol. 32.2, 2011, with several authors presenting their own tools for measuring language vitality. A number of other published works on measuring language vitality have been published, prepared by authors with varying situations and applications in mind. [21] [22] [23] [24] [25]

According to the Cambridge Handbook of Endangered Languages, [2] there are four main types of causes of language endangerment:

Causes that put the populations that speak the languages in physical danger, such as:

Causes which prevent or discourage speakers from using a language, such as:

Often multiple of these causes act at the same time. Poverty, disease and disasters often affect minority groups disproportionately, for example causing the dispersal of speaker populations and decreased survival rates for those who stay behind. 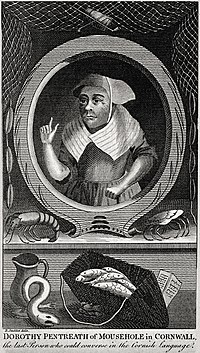 Dolly Pentreath, last native speaker of the Cornish language, in an engraved portrait published in 1781.

Among the causes of language endangerment cultural, political and economic marginalization accounts for most of the world's language endangerment. Scholars distinguish between several types of marginalization: Economic dominance negatively affects minority languages when poverty leads people to migrate towards the cities or to other countries, thus dispersing the speakers. Cultural dominance occurs when literature and higher education is only accessible in the majority language. Political dominance occurs when education and political activity is carried out exclusively in a majority language.

Historically, in colonies, and elsewhere where speakers of different languages have come into contact, some languages have been considered superior to others: often one language has attained a dominant position in a country. Speakers of endangered languages may themselves come to associate their language with negative values such as poverty, illiteracy and social stigma, causing them to wish to adopt the dominant language which is associated with social and economical progress and modernity. [2] Immigrants moving into an area may lead to the endangerment of the autochthonous language. [32]

Language endangerment affects both the languages themselves and the people that speak them. Also, this effect the essence of a culture.

As communities lose their language they often also lose parts of their cultural traditions which are tied to that language, such as songs, myths, poetry, local remedies, ecological and geological knowledge and language behaviors that are not easily translated [33]. Furthermore, the social structure of one's community is often reflected through speech and language behavior. This pattern is even more prominent in dialects [34].This may in turn affect the sense of identity of the individual and the community as a whole, producing a weakened social cohesion as their values and traditions are replaced with new ones. This is sometimes characterized as anomie. Losing a language may also have political consequences as some countries confer different political statuses or privileges on minority ethnic groups, often defining ethnicity in terms of language. That means that communities that lose their language may also lose political legitimacy as a community with special collective rights. Language can also be considered as scientific knowledge in topics such as medicine, philosophy, botany, and many more. It reflects a communities practices when dealing with the environment and each other. When a language is lost, this knowledge is lost as well. [35]

In contrast, language revitalization is correlated with better health outcomes in indigenous communities. [36]

During language loss—sometimes referred to as obsolescence in the linguistic literature—the language that is being lost generally undergoes changes as speakers make their language more similar to the language that they are shifting to. For example, gradually losing grammatical or phonological complexities that are not found in the dominant language. [37] [38]

Generally the accelerated pace of language endangerment is considered to be a problem by linguists and by the speakers. However, some linguists, such as the late phonetician Peter Ladefoged, have argued that language death is a natural part of the process of human cultural development, and that languages die because communities stop speaking them for their own reasons. Ladefoged argued that linguists should simply document and describe languages scientifically, but not seek to interfere with the processes of language loss. [39] A similar view has been argued at length by linguist Salikoko Mufwene, who sees the cycles of language death and emergence of new languages through creolization as a continuous ongoing process. [40] [41] [42]

A majority of linguists do consider that language loss is an ethical problem, as they consider that most communities would prefer to maintain their languages if given a real choice. They also consider it a scientific problem, because language loss on the scale currently taking place will mean that future linguists will only have access to a fraction of the world's linguistic diversity, therefore their picture of what human language is—and can be—will be limited. [43] [44] [45] [46] [47]

Some linguists consider linguistic diversity to be analogous to biological diversity, and compare language endangerment to wildlife endangerment. [48]

Language documentation is the documentation in writing and audio-visual recording of grammar, vocabulary, and oral traditions (e.g. stories, songs, religious texts) of endangered languages. It entails producing descriptive grammars, collections of texts and dictionaries of the languages, and it requires the establishment of a secure archive where the material can be stored once it is produced so that it can be accessed by future generations of speakers or scientists. [2]

Language revitalization is the process by which a language community through political, community, and educational means attempts to increase the number of active speakers of the endangered language. [2] This process is also sometimes referred to as language revival or reversing language shift. [2] Vocabulary and courses are available online for a number of endangered languages. [49]

Language maintenance refers to the support given to languages that need for their survival to be protected from outsiders who can ultimately affect the number of speakers of a language. [2] UNESCO's strides towards preventing language extinction involves promoting and supporting the language in aspects such as education, culture, communication and information, and science. [50]

Another option is "post-vernacular maintenance": the teaching of some words and concepts of the lost language, rather than revival proper. [51]

As of June 2012 the United States has a " J-1 specialist visa, which allows indigenous language experts who do not have academic training to enter the U.S. as experts aiming to share their knowledge and expand their skills". [52]