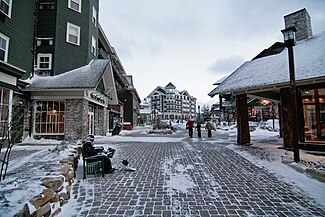 The Village at Snowshoe Mountain in Pocahontas County. Snowshoe has been ranked as the best overall ski resort in the Mid-Atlantic and South East regions and fourth-best in accommodations on the East Coast. [1] Tourism is a large industry in the state, producing a $13 million daily economic impact. [2]

The economy of West Virginia nominally would be the 62nd largest economy globally behind Iraq and ahead of Croatia according to 2009 World Bank projections, [3] and the 64th largest behind Iraq and ahead of Libya according to 2009 International Monetary Fund projections. [4] The state has a projected nominal GDP of $63.34 billion in 2009 according to the Bureau of Economic Analysis report of November 2010, and a real GDP of $55.04 billion. The real GDP growth of the state in 2009 of .7% was the 7th best in the country. West Virginia's economy accelerated in 2014 with a growth rate of 5.1%, ranking third among the fastest growing states in the United States alongside Wyoming and just behind North Dakota and Texas. [5]

Morgantown was ranked by Forbes as the 10th best small city in the nation to conduct business in 2010. [6]

The state is a global hub for chemicals, a national hub for biotech industries and a leader in energy, while having a diverse economy in aerospace, automotive, healthcare and education, metals and steels, media and telecommunications, manufacturing, hospitality, biometrics, forestry, and tourism.

West Virginia’s unemployment rate in August 2019 was 4.6%, the lowest since the start of the Great Recession. [7]

The economy of West Virginia nominally would be the 62nd largest economy globally behind Iraq and ahead of Croatia according to 2009 World Bank projections, [3] and the 64th largest behind Iraq and ahead of Libya according to 2009 International Monetary Fund projections. [4] The state has a projected nominal GDP of $63.34 billion in 2009 according to the Bureau of Economic Analysis report of November 2010, and a real GDP of $55.04 billion. The real GDP growth of the state in 2009 of .7% was the 7th best in the country. West Virginia was only one of ten states in 2009 which grew economically. [8]

Morgantown was ranked by Forbes as the #10 best small city in the nation to conduct business in 2010. [6] The city is also home to West Virginia University, the 109th best public university according to U.S. News & World Report. [12]

The state is a global chemical hub, cited by the Council of American States in Europe as one of North America's premier destinations, [15] with the presence of DuPont, Germany-based Bayer and Stockmeier Kunststoffe GmbH; a subsidiary of Japan-based Kureha, Ashland Specialty Chemical, Flexsys, and Brazil-based Braskem S.A. West Virginia has 80% community acceptance from the chemical industry nationwide, one of the highest in the nation. [15] The chemicals industry accounts for one-fifth of manufacturing sector jobs and nearly 40% of the manufacturing sector's economic output in West Virginia. [16]

The state has one of the nation's highest concentrations of biotech industries aided by the presence of corporations such as Germany-based BASF and Bayer, DuPont, PPG Industries, Dow Chemical Company, Mylan, founded in White Sulphur Springs, and Texas-based Alcon. [17]

Research and development and advanced tech

Through 2008, 45,284 West Virginians were employed in advanced technology industries, which made up 5.6% of the economic establishments in the state. Through 2007, 91,998 citizens of the state aged 25–44 held bachelor's degrees or higher. West Virginia receives annually around $261 million in federal R&D funds, ranking 34th in the nation. Private establishments receiving the most federal R&D contracts in 2009 were Fairmont-based Prologic, Inc., Security Assistance Corporation, Ridgeley-based Alliant Techsystems, Inc., Berkeley Springs-based STS International, and the Fairmont-based West Virginia High Technology Consortium Foundation (HTC). [18] 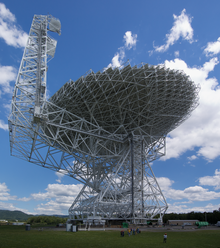 The state is home to federal institutions such as the portions of the National Energy Technology Laboratory and Forestry Science Laboratory in Morgantown, the Leetown Science Center and National Center for Cool and Cold Water Aquaculture in Leetown, National Radio Astronomy Observatory in Green Bank, the Forest Service Timber and Watershed Laboratory in Parsons, the Appalachian Farming Systems Research Center in Beckley, West Virginia District Office of Water Resources in Charleston, and Department of Veterans Affairs R&D units in Clarksburg and Huntington. [19]

The Mid-Atlantic Technology, Research and Innovation Center, or MATRIC, is headquartered in South Charleston.

West Virginia’s economy has depended so heavily on its mineral resources and declining coal production and low energy prices in recent years have hurt the state economy. Mining safety and ecological concerns are major challenges to West Virginia, which still produces the majority of the coal used in the U.S. [21]

West Virginia is considered a national energy hub, leading the nation in net interstate electricity exports and underground coal mine production, [22] [23] while experiencing a growing natural gas industry as a result of the Great Shale Gas Rush. Overall, it produces 15% of the nation's fossil fuel energy. [24] The state's underground natural gas storage represents 6% of the nation's total, and overall it has 5.1 billion cubic feet of natural gas reserves through 2008 estimates. [22] [25]

West Virginia was one of the first states to engage in drilling for oil. Small to medium oil and natural gas fields still exist and are scattered mostly in the Allegheny Plateau and the Cumberland Plateau in an arc throughout the western part of state. The state produces around 180,000 barrels of oil per month, with 23 million barrels of reserves through 2008 estimates. [22]

The state has a growing renewable energy portfolio, anchored by chemical and biodiesel manufacturer AC & S, based in Nitro. [26]

Coal is one of the state's primary natural resources, first discovered in the state in 1742. The industry employs 30,000 West Virginians directly, resulting in $2 billion in wages and a $3.5 billion economic impact. [29]

West Virginia is the largest coal producer east of the Mississippi River, and accounts for 10% of the nation's production. It leads the nation in coal production from underground mines, and has the nation's second largest reserves behind Wyoming. [22]

It has an extensive network of railroads, and much of the coal is transported by rail. The railways were once one of the largest customers for coal to drive the steam locomotives, but these have been replaced by diesel locomotives. Coal is rarely used now for home heating. Most coal today is used by power plants to produce electricity, both in West Virginia, and in other eastern states.

The Mountaineer Wind Energy Center was the first wind farm built in the state in 2002.

The state has a growing renewable energy portfolio, anchored by chemical and biodiesel manufacturer AC & S, based in Nitro. [32] The National Research Center for Alternative Fuels, Engines and Emissions is located in Morgantown.

Mountaineer Wind Energy Center located in Preston County and Tucker County was the first wind farm built in the state in 2002. The Beech Ridge Wind Farm is a $300 million, 119 turbine project currently under construction in Greenbrier County. The Mount Storm Wind Farm is located in Grant County and operates 132 turbines.

West Virginia is home to several hydroelectric facilities, including Honeywood Dam on the Potomac River, Cheat Lake Dam in Monogalia County, and Summersville Dam on the Gauley River.

Google has invested in research exploration of the state's geothermal reserves. [33]

In 2009, West Virginia University Healthcare alone had an economic impact of $2.2 billion on the state and was the #23 employer. [36] West Virginia United Health System was the #2 employer in 2009, ahead of Charleston Area Medical Center at #3, St. Mary's Hospital #7, Cabell Huntington Hospital, Inc. #12, Wheeling Hospital #14, and Camden-Clark Memorial Hospital #24.

It is home to one of the highest concentration of resin producers in the world. [41] General Electric Plastics is located in Washington.

One of Bureau of the Public Debt's several buildings in downtown Parkersburg.

The FBI's Criminal Justice Information Services Division is located in Clarksburg, NASA's Independent Verification and Validation Facility in Fairmont, and the U.S. Department of Treasury's Bureau of the Public Debt is located in Parkersburg.

Between 1990–2004, the state experienced $1 billion in investment in the sector and 1500+ new employment positions. It is home to major automotive operations such as Japan-based Toyota in Buffalo, and others including Diamond Electric in Eleanor since 1996 [42] (in 2014 Diamond moved their North American headquarters to West Virginia), [43] NGK Spark Plugs in Sissonville, and Italy-based Sogefi and Japan-based Okuno International in Prichard. [44]

Terradon Communications Group, located in Poca, is a leader in website design and development, with clients including Whirpool International. [46] Others include Texas-based Aegis Group.

A giant slalom competitor at a USCSA event for the Southeastern Conference at Snowshoe Mountain.

The Greenbrier located in White Sulphur Springs once housed the emergency bunker of the U.S. Congress.

Farming is practiced throughout West Virginia, but in a form different from large extensive cash-crop agriculture elsewhere in the USA. The modal average farm size is a smallish 154 acres. [47] Family and single-owner operation worked 92.7% of the farms, and an astounding 96.9% were totally or partly owned by the operator. On the other hand, only 50.5% of the state's farmers considered farming to be their primary occupation, with a significant number of hours worked elsewhere each year. The rural poverty rate in West Virginia is 20.4%, five points higher than the urban poverty rate.

This description of farming portrays an independent and self-sufficient base of small land owners, but also a significant amount of rural poverty.

As can be expected in a rugged terrain, raising animals was far more important than growing vegetative crops. Income from animals exceeded income from plants by about 7 to 1, with much of the non-animal income derived from sales of fodder. The chief animals raised were cattle and chickens.

In the ridge and valley area along the eastern border near Virginia's Shenandoah Valley, subsidiary valleys are wide and there are some belts of rich soil which are extensively farmed. In 2002, all of the top five counties by agricultural dollar value were located near the eastern Virginia border.

In traditional frontier agriculture there was much gathering of wild "greens" and other vegetation to supplement the diet. One area where this practice is still significant is the gathering of wild North American ginseng, often for the Asian market. Wild gathered ginseng contributed about $2 million in 2000 to the West Virginia economy, a figure larger than many conventional cultivated vegetable and fruit crops. Other wild greens, such as sour dock, lambs quarters, and wild leek (or "ramps") are also still gathered by many for table use, although today more on the basis of avocation or keeping up traditions than out of necessity.

Along the western edges of the state the large rivers of the mid-continent erode a distance into the hills and it is here, in the west, that some dense pockets of heavy industry appear. In the Kanawha River Valley near Charleston and along the southern Ohio River Valley near Huntington chemicals predominate, attracted by a readily available labor force and access by barge carriers. Metallurgy, especially steel, has been predominant in the Northern Panhandle due to a spill-over effect from the traditional center of the US steel industry in Pittsburgh.

Due to the rural demographics in West Virginia, the state isn't dominated by any major U.S. banks. In fact, the only Big Four bank with any retail banking presence in the state is Chase Bank, and only in the Charleston area. Wesbanco is the largest bank in the state, [48] and the only major bank with a presence throughout the state. City National Bank (West Virginia) also has a significant presence in several areas in West Virginia. Other major banks in the state, but only in certain areas, include Chase, Fifth Third Bank in Charleston and PNC Financial Services in Morgantown. 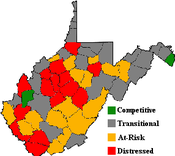 The Appalachian Regional Commission was formed in 1965 to aide economic development in the Appalachian region, which was lagging far behind the rest of the nation on most economic indicators. The Appalachian region as defined by the Commission includes 420 counties in 13 states, including all 55 counties in West Virginia, the only state whose entire territory is covered by the Appalachian Regional Commission. The Commission gives each county one of five possible economic designations - distressed, at-risk, transitional, competitive, or attainment - with "distressed" counties being the most economically endangered and "attainment" counties being the most economically prosperous. These designations are based primarily on three indicators - three-year average unemployment rate, market income per capita, and poverty rate. [49]