The eastern coyote (Canis latrans var.) is a wild North American canine of both coyote and wolf parentage. The hybridization likely first occurred in the Great Lakes region, as western coyotes moved east. It was first noticed during the early 1930s to the late 1940s, and likely originated in the aftermath of the extirpation of the gray wolf in southeastern Ontario, Labrador and Quebec, thus allowing coyotes to colonize the former wolf ranges and mix with the remnant wolf populations. [1] [2] This hybrid is smaller than the eastern wolf and holds smaller territories, but is larger and holds more extensive home ranges than the typical western coyote. [1]

Northeast coyotes benefit from a more diverse genome that includes genes from both wolves and dogs, which has likely allowed their adaption to both forested and human-dominated habitats. Coyotes moved into the northeast after they began to hybridize with wolves between 154 and 190 years ago. Coyotes are more genetically wolf-like in areas where a high deer density exists, supporting the theory that introgression from wolves allowed genetic adaption to this food source. There are an estimated 16–20 million white-tailed deer in the United States, and their overpopulation is estimated to cause $2 billion in damage each year, with $1 billion in automobile damage alone. Management practices should consider the ecological value of large predators in maintaining their balance. [7]

In 2016, a proposal was made to recognize the eastern coyote as a separate species due to its morphologic and genetic distinctiveness. Additionally, it has bred with other northeast coyotes across the majority of its range, without further hybridization with parent species, except for on the edges of this range. Its range includes areas where the western coyote would find it difficult to survive. The designation Canis oriens (Latin for "eastern canid") has been proposed (along with "coywolf") in place of the unwieldy Canis latrans × Canis lycaon × Canis lupus. [4] 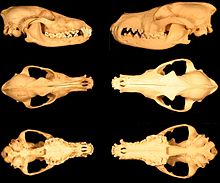 Aside from size, both eastern and western coyotes are physically similar; each have erect ears, a straight and bushy tail, a conspicuous supracaudal gland and a narrow chest. The eastern has four color phases, ranging from dark brown to blond or reddish blond, with gray-brown the most common, and reddish legs, ears and flanks. [10]

Eastern coyotes are opportunistic omnivores and will prey on whatever is available and easy to kill or scavenge. Though they are known to take anything from mice to moose, [24] the Ontario Ministry of Natural Resources lists their main prey items as rabbits, hares, and deer in the winter and small mammals, wild berries, birds, amphibians, and grasshoppers in the summer. [25]

Their diet shifts with the changing seasons. It can include, but is not limited to, insects and berries during summer and small mammals in the fall and winter. As winter becomes harder later in the season, larger game such as the white-tailed deer become targeted. They often hunt in pairs, though deer killed by vehicles or by natural causes are more frequently scavenged. Researchers from the State University of New York College of Environmental Science and Forestry examined animal carcasses visited by radio-collared coyotes during the winter and summer of 2008-09. During the winter, only 8% of adult deer had been killed conclusively by eastern coyotes. The remaining 92% were scavenged by coyotes after being killed by vehicles or receiving other injuries. The adult deer that were taken had severe preexisting injuries, and were likely to die from other causes in the absence of coyote predation. In spring fawns are targeted instead. [26] [27] [28] [29]