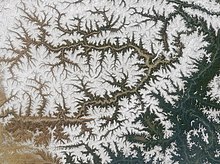 According to the configuration of the channels, drainage systems can fall into one of several categories known as drainage patterns. Drainage patterns depend on the topography and geology of the land. [2]

A drainage system is described as accordant if its pattern correlates to the structure and relief of the landscape over which it flows. [2] 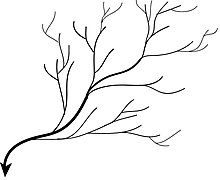 Dendritic drainage systems (from Greek δενδρίτης, dendrites, "of or parallel to a tree") are not straight and are the most common form of drainage system. In a dendritic system, there are many contributing streams (analogous to the twigs of a tree), which are then joined together into the tributaries of the main river (the branches and the trunk of the tree, respectively). They develop where the river channel follows the slope of the terrain. Dendritic systems form in V-shaped valleys; as a result, the rock types must be impervious and non-porous. [3] 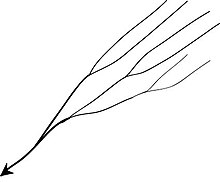 A parallel drainage system is a pattern of rivers caused by steep slopes with some relief. Because of the steep slopes, the streams are swift and straight, with very few tributaries, and all flow in the same direction. This system forms on uniformly sloping surfaces, for example, rivers flowing southeast from the Aberdare Mountains in Kenya.

Parallel drainage patterns form where there is a pronounced slope to the surface. A parallel pattern also develops in regions of parallel, elongate landforms like outcropping resistant rock bands. Tributary streams tend to stretch out in a parallel-like fashion following the slope of the surface. A parallel pattern sometimes indicates the presence of a major fault that cuts across an area of steeply folded bedrock. All forms of transitions can occur between parallel, dendritic, and trellis patterns.

The geometry of a trellis drainage system is similar to that of a common garden trellis along a strike valley, smaller tributaries feed into from the steep slopes on the sides of mountains. These tributaries enter the main river at approximately 90 degree angle, causing a trellis-like appearance of the drainage system. They form where hard and soft rocks exist parallel to each other. Trellis drainage is characteristic of folded mountains, such as the Appalachian Mountains in North America and in the north part of Trinidad. [2]

Rectangular drainage develops on rocks that are of approximately uniform resistance to erosion, but which have two directions of jointing at approximately right angles or 90 degrees. The joints are usually less resistant to erosion than the bulk rock so erosion tends to preferentially open the joints and streams eventually develop along the joints. The result is a stream system in which streams consist mainly of straight line segments with right angle bends and tributaries join larger streams at right angles. [2] This pattern can be found with the Arun River in Nepal. 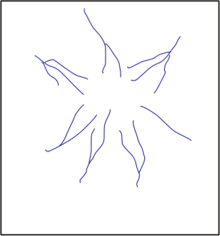 In a radial drainage system, the streams radiate outwards from a central high point. Volcanos usually display excellent radial drainage. They can sometimes also be found on tops of mountains. Other geological features on which radial drainage commonly develops are domes and laccoliths. On these features the drainage may exhibit a combination of radial patterns. The radical pattern develops when streams flow in different directions from a central peak or dome like structure. In India the Amarkantak range and Ramgarh crater show the best example of radial drainage pattern. Dogu'a Tembien is an example from Ethiopia. [4] 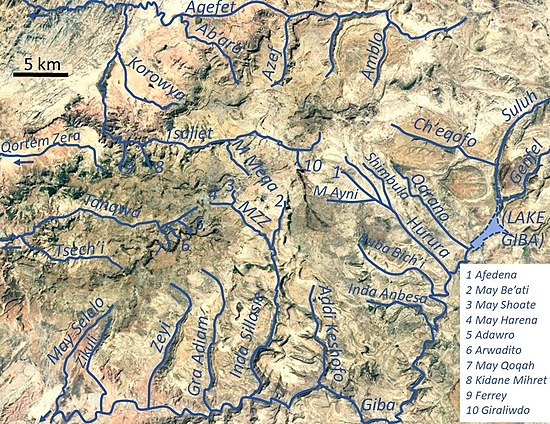 The radial drainage network of Dogu’a Tembien in Ethiopia

A deranged drainage system is a drainage system in drainage basins where there is no coherent pattern to the rivers and lakes. It happens in areas where there has been much geological disruption. The classic example is the Canadian Shield. During the last ice age, the topsoil was scraped off, leaving mostly bare rock. The melting of the glaciers left land with many irregularities of elevation and a great deal of water to collect in the low points, explaining the large number of lakes which are found in Canada. The drainage basins are young and are still sorting themselves out. Eventually the system will stabilize. [1] 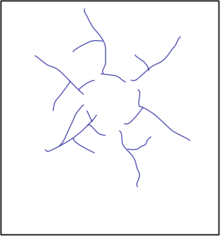 A drainage pattern is described as discordant if it does not correlate to the topography and geology of the area. Discordant drainage patterns are classified into two main types: antecedent and superimposed, [2] while anteposition drainage patterns combine the two. In antecedent drainage, a river's vertical incision ability matches that of land uplift due to tectonic forces. Superimposed drainage develops differently: initially, a drainage system develops on a surface composed of 'younger' rocks, but due to denudative activities this surface of younger rocks is removed and the river continues to flow over a seemingly new surface, but one in fact made up of rocks of old geological formation.