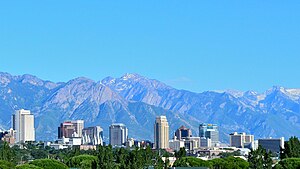 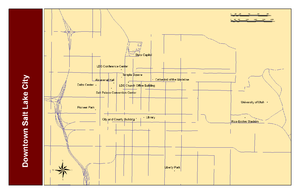 Downtown is the oldest district in Salt Lake City, Utah. The grid from which the entire city is laid out originates at Temple Square, the location of the Salt Lake Temple.

Downtown Salt Lake City is usually defined as the area approximately between North Temple and 400 South Streets north to south and about 500 East and 600 West Streets east to west. Downtown encompasses the areas of Temple Square, The Gateway, Main Street, the central business district, South Temple, and others. Along with local and state government and non profits, two primary business organizations - the Salt Lake Chamber and the Downtown Alliance promote Salt Lake CIty's downtown as the heart of the state, and as its most lively and diverse locale.

Downtown's layout was first planned in 1833, 17 years before Salt Lake City was founded. Joseph Smith designed the Plat of Zion, a plan for cities of 20,000 people each that followed city blocks with self-sufficient family farms surrounding several temples in the center. Smith meant for this plan to be applied to the City of Zion in the Midwestern United States, but following persecution and Smith's assassination, the plans were carried westward by the Mormon pioneers. Downtown Salt Lake began to form in 1847 when Brigham Young chose the site of the Salt Lake Temple of The Church of Jesus Christ of Latter-day Saints, forming the core of the settlement. Temple Square became the center of the grid system, bounded by South Temple, West Temple, North Temple, and East Temple Streets. Streets are named according to their distance and direction from the southeast corner of Temple Square; for example 200 West is two blocks west of this meridian, while 400 South is four blocks south. East Temple was popularly known as Main Street, and was officially renamed sometime in the late 19th century. It has been the commercial center of the city.

The early Mormon pioneers, who originally settled in Salt Lake City, adopted a form of consecration whereby crops grown and products produced were divided among members of The Church of Jesus Christ of Latter-day Saints (LDS Church) in local congregations. This enabled new settlers to have the food and products they needed after they made the rigorous journey to Salt Lake City. This exchange was eventually organized into what would become Zions Cooperative Mercantile Institution (ZCMI).

The first businesses to locate on Main Street were those founded by James A. Livingston and Charles A. Kincade, in 1850, in the area south of the Council House that was being built on the corner of Main and South Temple Streets. The Mormon pioneers lived a very secluded existence in the remote Salt Lake Valley for the first 20 years of settlement. However, in 1865 U.S. troops stationed in Park City discovered silver and announced it to the world.

With this announcement, an entirely new element began streaming into Salt Lake City. Prospectors completely changed the downtown district. In accommodation of the new crowd, many of the Main Street businesses were saloons, earning the street the nickname "Whiskey Street".

For many years, there existed a political and cultural divide in Salt Lake City. Mormons would mostly shop and congregate around the Salt Lake Temple, the Gardens at Temple Square and ZCMI on the north-end of Main Street, and those who were not members of the church, who were mostly prospectors in the early days, would stay south of the predominantly Mormon area.

Originally, the business district extended along the west side of Main between South Temple and 100 South. By the 1880s, the area had expanded to both sides of the street and down to 200 South, and increased about a block a decade, until 1900, when it reached 400 South. Today, the southern limit of downtown Salt Lake City is usually considered 900 South.

From 1870 to the 1930s, Commercial Street (Now known as "Regent Street") was Salt Lake's notorious red light district. Prostitution was begrudgingly tolerated as long as it was confined to Commercial Street, thus kept out of the public eye.

In the late 1880s, the trade was unofficially licensed. Police would "arrest" all of the prostitutes and their madams each month and "fine" them $50 each. After a physical examination, they would be released and allowed to ply their trade without any further fear of molestation.

Many notable Salt Lakers owned buildings on Commercial Street, including the Brigham Young Trust Company, whose board included many prominent members of The Church of Jesus Christ of Latter-day Saints (LDS Church). Brigham Young, Jr., then a church Apostle and vice president of the bank, temporarily resigned over the matter, until the building was later sold. 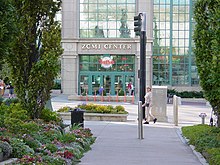 After World War II, many people could afford to move out of downtown into the suburbs. By 1971, 60% of the homes in downtown Salt Lake City were in major disrepair.

Starting in the 1960s, revitalization efforts began, spearheaded by the LDS Church, who had always considered downtown their home. During the '70s, they built the ZCMI Center Mall on a full city block of land that had previously housed the ZCMI department store, preserving the historic storefront. The Church also leased land to a developer to build Crossroads Mall. The land for the mall originally housed the Amussen Jewelry building (1869), at the time Salt Lake City's oldest building. A study commissioned by the city found it to be Salt Lake City's most architecturally significant building, and efforts to preserve it were underway. However, before the building could be saved, it was torn down to make way for the mall.

From 1970-1976 the Central Main Street shopping district saw a dramatic shift from the South-end (near Exchange Place and Broadway) to the North-end (near the L.D.S Temple). This shift was the result of a change in buying patterns, with shoppers preferring malls rather than on-street department stores. Using land and a loan provided by Zion Securities, the second Main Street mall was completed in 1978. Following the completion of the Crossroads Mall the South-end of main street collapsed, beginning with 117-year-old merchant Auerbachs Department Store. Others to go under were Broadway Music, Paris Company, Baker Shoes, Pembroke's, Keith O'Brien and Keith Warshaw.

In the 1980s, a Saudi businessman, Adnan Khashoggi, had a vision of turning Salt Lake City into a major business hub. Forming a U.S. holdings company, "Triad Utah", he planned to build two 43-story skyscrapers, as well as several mid-rise buildings. Khashoggi was implicated in the Iran-Contra scandal and his assets were frozen by the Federal government and the skyscrapers were never built, leaving the current Triad Center with only buildings 3, 4 and 5. Revitalization efforts of downtown continued through the 1990s and 2000s. The old Salt Palace arena was torn down and a new arena, Vivint Smart Home Arena, was constructed to the northwest in 1991. The existing convention center connected to the arena was also demolished and a new convention center of the same name was built on the site. In 1998 the Wells Fargo Center was completed and remains the tallest building in Salt Lake City today (although the LDS Church Office Building appears taller because it stands on higher ground). In 2000, the LDS Conference Center was completed and supplanted the still-existing Salt Lake Tabernacle for conferences of The Church of Jesus Christ of Latter-day Saints. The Gateway, which contains office space, apartment complexes, and an open-air shopping center, was completed in 2001 near the western edge of downtown, replacing an old, run-down industrial area near the railroad. LDS Business College as well as the BYU Salt Lake Center moved downtown to the Triad Center, which was also purchased by the LDS Church in 2004. In 2007, the newest high-rise known as the 222 South Main building began construction. The 21 story building was completed in July 2009.

Pioneer Park, on the western edge of downtown, has developed a reputation as one of the most crime-ridden areas of the state, and also has a high rate of drug dealers. During a six-day crackdown in early November, 2007, 658 people were arrested in and around the park, approximately 70% of all arrests made in the city during that time period in an area that takes up just 1% of Salt Lake City. [1] Pioneer Park was completely renovated in early 2008 following several severe assault incidents.