Dickson County is home to Tennessee's oldest courthouse in continuous use, built in 1835. This is the second courthouse in Charlotte as the first one, a log building, was destroyed in the Tornado of 1833, which destroyed all but one building on the courthouse square.

October 25, 1803 the Tennessee General Assembly passed a bill creating Dickson County, the 25th of Tennessee's 95 counties. It was formed from parts of Montgomery and Robertson counties, and was named for William Dickson, a Nashville physician then serving in the United States Congress. [1] Dickson never lived in the county, but his relatives were prominent in its early development. Dickson was a close friend of President Andrew Jackson.

General James Robertson built the first iron works in west Tennessee in Dickson County. Robertson sold his furnace in 1804 to Montgomery Bell (1769–1855), who became one of the state's wealthiest capitalists and industrialists. [1]

The Ruskin Colony and The Coming Nation 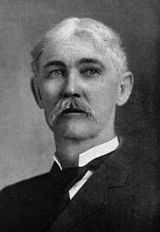 Julius Wayland, publisher of The Coming Nation and the Appeal to Reason.

The Ruskin Colony (or Ruskin Commonwealth Association) was a 250-member, utopian socialist cooperative established in Dickson County in 1894. Initially located near Tennessee City, it relocated to what is now Ruskin. Internal conflict had brought about the dissolution of the colony by 1899. [1]

The Coming Nation, a socialist communalist paper established by Julius Augustus Wayland in Greensburg, Indiana, was relocated to the Ruskin Colony. It was the forerunner of the Appeal to Reason, which later became a weekly political newspaper published in the American Midwest from 1895 until 1922. The Appeal to Reason was known for its politics, giving support to the Farmers' Alliance and People's Party, before becoming a mainstay of the Socialist Party of America following its establishment in 1901. Using a network of highly motivated volunteers known as the "Appeal Army" to increase its subscription sales, the Appeal's paid circulation climbed to over a quarter million by 1906, and half a million by 1910, making it the largest-circulation socialist newspaper in American history. [4] [5]

In July 1917, a mass meeting was held in the Alamo Theatre in Dickson to raise $760 (equivalent to $25,000 in 2016) to pay for the surveying of the Bristol to Memphis Highway through Dickson County. The money was raised in less than 15 minutes by donations from those present at the meeting. State highway surveyors began surveying the route on August 14, 1917. The building of this highway put the county along the route known as the “Broadway of America,” Highway 70.

On November 4, 1952, Frank G. Clement (1920–1969) of Dickson was elected Governor of Tennessee. He served as governor from 1953 to 1959, and again from 1963 to 1967. Known for his energetic speaking ability, he delivered the keynote address at the 1956 Democratic National Convention. The Hotel Halbrook, where Clement was born, still stands in Dickson, and has been listed on the National Register of Historic Places.

Dickson County is bordered on the northeast by the Cumberland River. The Harpeth River passes along the county's eastern border.

Dickson County has historically been a swing county in presidential elections. The last Democrat to carry this county in a statewide election was Al Gore in 2000.

The 12-member county commission is the legislative body of Dickson County. One commissioner is elected from each of the county's 12 commission districts. The county mayor chairs the commission.

Commissioners are charged with appropriating funds for the county departments, setting the property tax rate and creating personnel policies for county employees.

The commissioners are chosen in the August general elections and serve four-year terms. These elections coincide with the state's gubernatorial primaries and begin September 1 of each non-presidential even-numbered year.

Dickson County has various elected officials to carry out the necessary duties of the county government.

Elected officials are chosen in the August general elections, along with commissioners, and serve four-year terms. These elections coincide with the state's gubernatorial primaries and begin September 1 of each non-presidential even-numbered year.

The Mayor appoints citizens to lead county government departments, subject to approval by the County Commission.

The judicial officials are chosen in the August general elections, along with other elected officials and county commissioners, and serve four-year terms (with the exception of the General Sessions Judge, who serves an eight-year term, with elections coinciding with every other gubernatorial primary). These elections coincide with the state's gubernatorial primaries and begin September 1 of each non-presidential even-numbered year. All Dickson County elected offices are nonpartisan.

The Dickson County School District serves the entirety of the county. Since 2012, the current Director of Schools is Dr. Danny L. Weeks. [30]

Serving around 8,500 students, the Dickson County School System ranks 23rd in student population among 142 school districts in Tennessee. The District employs around 1,200 people. [31]

The Board of Education is elected to govern the education system in Dickson County, through setting its budget, planning for future developments, and setting policies. The Board meets every 4th Thursday of the month. [32]

The Board also chooses the Director of Schools. Each member represents one of the six districts. Each district is composed of two county commission districts.

Prior to the 1920s, numerous private high schools and colleges existed in Dickson County. These included the Tracy Academy, Charlotte Female School, Alexander Campbell School, Edgewood Academy and Normal College, the Dickson Academy, Dickson Normal School (where Hattie Carraway, the first woman elected to the U.S. Senate, was educated), Glenwylde Academy, and Ruskin Cave College. Most of these closed before or during the Great Depression. [36] As is typical of most Tennessee counties, all public schools of the county are currently operated by a single county-wide school district.

Dickson is home to three campuses for higher education.

Nashville State Community College maintains a satellite campus in Dickson at the Renaissance Center, offering associate degrees to prepare students to transfer to four-year universities or enter the workforce. [39]