Massachusetts has an estimated population of 6.902 million as of 2018 according to the U. S. Census Bureau. [1] This represents a 5.4% increase in population from 2010, when the population was 6.547 million. Currently, Massachusetts is the fifteenth most populous U.S. state.

Massachusetts has seen both population increases and decreases in recent years. For example, while some Bay Staters are leaving, others including European, Asian, Hispanic, African, Middle Eastern, and North American immigrants arrive to replace them. Massachusetts in 2004 included 881,400 foreign-born residents.

Most Bay Staters live within a 60-mile radius of the State House on Beacon Hill, often called Greater Boston: the City of Boston, neighboring cities and towns, the North Shore, South Shore, the northern, western, and southern suburbs, and most of southeastern and central Massachusetts. Eastern Massachusetts is more urban than Western Massachusetts, which is primarily rural, save for the cities of Springfield, Chicopee, Holyoke, and Northampton, which serve as centers of population density in the Pioneer Valley of the Connecticut River. The center of population of Massachusetts is located in Middlesex County, in the town of Natick. [5]

The population is distributed as follows:

Massachusetts has a density of 890 people per square mile, making it the third most dense of the fifty states (fifth including District of Columbia and Puerto Rico). [10]

According to the 2012-2016 American Community Survey 5-Year Estimates, the largest ancestry groups in Massachusetts are: [11] [12]

Boston's largest immigrant groups are Haitians. In the northeast of the state, is home to a large Cambodian (Khmer) community, second in the country only to the concentration of Cambodians in Long Beach, California. Massachusetts also has the fastest growing population of South Asians, including Indian people, which are concentrated in certain areas of Greater Boston and outside such as Shrewsbury, Woburn, Malden, Quincy, Somerville, and Cambridge.

Although many of the Native Americans have intermarried with other ethnic groups (or died in King Philip's War of 1675),[ citation needed] the Wampanoag tribe maintains reservations at Aquinnah, at Grafton, on Martha's Vineyard, and at Mashpee on Cape Cod. [13] [14] The Nipmuck maintain two state-recognized reservations in the central part of the state. Many Wampanoags and other native people live outside of reservations.

Note: Births in table don't add up, because Hispanics are counted both by their ethnicity and by their race, giving a higher overall number.[ citation needed]

As the United States does not collect religious data, it is unknown how many people of each religion live in Massachusetts. Some polls only measure religious adherence of church rather than the whole population. Massachusetts was founded and settled by Puritans in the 17th century. The descendants of the Puritans belong to many different churches; in the direct line of inheritance are the Congregational/ United Church of Christ and Unitarian Universalist Association. Both of these denominations are noted for their strong support of social justice, civil rights, and moral issues, including strong and early advocacy of abolition of slavery, women's rights, and (after 2000) legal recognition of same-sex marriage.[ citation needed] The headquarters of the Unitarian Universalist Association is located on Beacon Hill in Boston. Today Protestants make up less than 1/4 of the state's population. Roman Catholics now predominate because of massive immigration from Ireland, Quebec, Italy, Poland, Portugal, Puerto Rico, and the Dominican Republic. A large Jewish population came to the Boston area 1880–1920. Many Jews from Eastern Europe have also been immigrating to the Boston area since the fall of Communism. Islam has also been growing in recent years and now numbers between 30,000 and 80,000. Mary Baker Eddy made the Boston Mother Church of Christian Science the world headquarters. Buddhists, Taoists, Pagans, Hindus, Seventh-day Adventists, and Mormons also can be found. Kripalu and the Insight Meditation Center (Barre) are examples of non-western religious centers in Massachusetts. Bahá'ís are also present.

According to the Association of Religion Data Archives the largest single denominations are the Roman Catholic Church with 3,092,296; the United Church of Christ with 121,826; and the Episcopal Church with 98,963 adherents. Jewish congregations had about 275,000 members. [23]

As of 2001 [update], the religious affiliations of the people of Massachusetts were: [24] 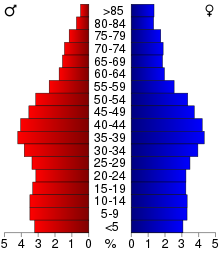 The latest (2009) estimated Census population figures show that Massachusetts has grown by over 3 percent, to 6,593,587 since 2000. [2] This slow growth is likely attributable to the fact that Massachusetts continues to attract top scholars and researchers from across the United States as well as large numbers of immigrants, combined with steady emigration away from the state towards New Hampshire and southern and western regions of the U.S. because of high housing costs, weather, and traffic.

Recent census data shows that the number of immigrants living in Massachusetts has increased over 5% from 2000–2005. The biggest influxes are Latin Americans. According to the census, the population of Central Americans rose by 67.7 percent between 2000 and 2005, and the number of South Americans rose by 107.5 percent. And among South Americans, the largest group to increase appeared to be Brazilians, whose numbers rose by 131.4 percent, to 84,836. This surge of immigrants tends to offset emigration, and, of course, given the 350,000 increase in population in the Commonwealth between 1990 and 2000, many immigrants to Massachusetts come from elsewhere in the USA.[ citation needed]

Following the shift to a high-tech economy and the numerous factory closures, few jobs remain for low skilled male workers, who are dropping out of the workforce in large numbers. The percentage of men in the labor force fell from 77.7% in 1989 to 72.8% in 2005. This national trend is most pronounced in Massachusetts. In the case of men without high school diplomas, 10% have left the labor force between 1990 and 2000. [25]