Danville was founded in 1827 on 60 acres (240,000 m2) of land donated by Guy W. Smith and 20 acres (81,000 m2) donated by Dan W. Beckwith. [6] The sale of lots was set for April 10, 1827 and advertised in newspapers in Indianapolis, Indiana and the state capital of Vandalia. [1] The first post office was established in May of the same year in the house of Amos Williams, organizer of Vermilion and Edgar Counties and a prominent Danville citizen. Williams and Beckwith drew up the first plat map; the city was named after Dan Beckwith at Williams' suggestion, although Beckwith suggested the names "Williamsburg" and "Williamstown". Beckwith was born in Pennsylvania in 1795 and moved to Indiana as a young man; in 1819 he accompanied the first white explorers to the area where Danville later existed because of his interest in the salt springs of the Vermilion River. He died in 1835 of pneumonia contracted on a horseback ride back from Washington; he was 40 years old. [7] Danville became a major industrial city in the late 19th and early twentieth centuries. From the 1850s to the 1940s, Danville was an important coal mining area; some of the first open pit mining techniques were practiced here. [8] The coal formation underlying eastern Illinois and western Indiana is named the "Danville Member," after the area where it was first discovered. [9] With the closure of the mines and many factories, Danville's economic base suffered in the latter half of the 20th century. The former mines were converted into lakes, creating fishing and recreation opportunities at parks such as Kickapoo State Recreation Area and Kennekuk Cove County Park.[ citation needed]

Danville is located approximately 120 miles (190 km) south of Chicago, 35 miles (56 km) east of Champaign-Urbana, and 90 miles (140 km) west of Indianapolis, Indiana. Illinois Route 1, U.S. Route 136, and U.S. Route 150 intersect in Danville; Interstate 74 passes through the south end of town. Lake Vermilion is located on the northwest side of town.

Danville is the principal city of the Danville Metropolitan Statistical Area, which encompasses all of Danville and Vermilion County.

There were 13,327 households out of which 28% had children under the age of 18 living with them, 42.0% were married couples living together, 15.1% had a female householder with no husband present, and 38.8% were non-families. 33.9% of all households were made up of individuals and 15.5% had someone living alone who was 65 years of age or older. The average household size was 2.35 and the average family size was 3.01.

The city of Danville maintains 20+ parks and recreation facilities, from small pocket parks to large regionally significant parklands. [14] Danville's parks contribute to a county-wide collection that includes four county parks and three state parks. [15] When combined with the city parkland, these total more than 15,000 acres, providing more acres of public park per capita than in any other county in Illinois. [15]

Danville sits along the shore of Lake Vermilion, which is a 1,000-acre reservoir. [16] The lake allows for fishing, bird watching, and unlimited-horsepower marine boating, jet-skiing, and waterskiing. [17] Danville also sits along the Vermilion River, which provides recreational opportunities and supports abundant wildlife. [18]

There are several notable parks within the city, including Lincoln Park, home of mature trees, tennis courts, and the Abraham Lincoln–associated Lamon House (a Greek Revival cottage built in 1850 by Joseph and Melissa Beckwith Lamon). [19] On the west side of the city, the North Fork of the Vermilion River winds through Harrison Park Golf Course, providing a backdrop for the 235-acre golf course and hiking destination. [20] On the north side, the Heron County Park Wetlands Boardwalk extends into Lake Vermilion and includes a 950-foot handicapped-accessible floating boardwalk that weaves through the marshland. The park also contains a 30-foot observation tower, which often provides views of bald eagles and American egrets. [21] 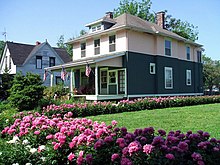 A home in the West Downtown Neighborhood

Danville is broadly divided into three districts. including the downtown district, the retail district, and the campus district. [30] [31] [32] The downtown district consists of the historic core of the city, the retail district includes the northside retail corridor, and the campus district includes the Danville Area Community College (DACC) and VA campuses on the city's east side.

Danville's main shopping center is the Village Mall, opened in 1975. Additional retail has spread north on Route 1/Vermilion Street since the early 90s, ranging from traditional big-box stores to retail infill and redevelopment of abandoned shopping centers. Retail in the community has increased after a large influx of redevelopment and green development, beginning in 2013 with the addition of Meijer and the Kohl's Plaza.

Portions of Danville are covered under the Illinois Enterprise Zone Program tax incentive program. [33] Additionally, the City of Danville has created five Tax Increment Financing districts, including downtown, campus corridor, midtown, east Voorhees, and western gateway. [34] Other available programs include a small business revolving loan fund and a downtown special service area (SSA). [34] [35] [36] Economic development initiatives in the county, including in Danville, are covered by the organization Vermilion Advantage as well as Downtown Danville Inc, the City of Danville, and other partners. [37] [38]

Other tourist attractions include the historic downtown district, home of the Fischer Theatre, which includes a museum dedicated to the many famous performers who have lived in Danville, including Dick Van Dyke, Jerry Van Dyke, Donald O'Connor, Bobby Short, and Helen Morgan. [43] [44] [45] The downtown area also includes the performance space Temple Plaza, Palmer Arena and ice rink, and 18 murals painted in 4 days by 160 Walldog artists from all over the world. [45] [46]

Danville is home to a number of noteworthy buildings and structures, including 10 places on the national registry of historic places and 21 places on the local registry. [27] These notable places include a Carnegie library, now operating as the Vermilion County War Museum; the Fithian Home, where Abraham Lincoln gave a speech in 1858; and the Danville Branch, National Home for Disabled Volunteer Soldiers Historic District, currently located on the campus of DACC; the VA; and the Danville National Cemetery. [47] [48] [49] [50]

In July the city attracts hot air balloon enthusiasts from around the region for Balloons Over Vermilion, which takes place at the Vermilion Regional Airport, and a Splash-n-Dash flight over Lake Vermilion. [51] [52] [53] In June regional artists descend on Danville for the annual Arts in the Park event in the historic Lincoln Park. [54] [55] Throughout the summer downtown's Temple Plaza hosts the Summer Sounds Concert Series. [56] [57] [58] The area is home to many other events throughout the year, including parades, farmers' markets, sporting events, and festivals.

Danville is home to several significant cultural institutions and museums. Artistic institutions include the Danville Art League, headquartered in the west downtown neighborhood; the Danville Symphony Orchestra; the Danville Light Opera; the Dark Horse Theater Company; the Red Mask Players; and the DACC Players (from the Danville Area Community College. [59] [60] [61] Performance venues include the historic Fischer Theatre, the Kathryn Randolph Theater, and the performance venues on DACC’s campus. Museums in the city include the Vermilion County Museum, the Vermilion County War Museum, and the Fischer Arts & Entertainment Museum. [62] [63] [64]

Outside of high school and Danville Area Community College sports, Danville is home to two sports teams. The Danville Dans are a summer collegiate wooden-bat baseball team that play in Danville Stadium. They were founded in 1989 as a member of the Central Illinois Collegiate League, which later merged with the Prospect League. The team has won nine championships, all of them coming in the CICL. The Danville Dashers are now the oldest team in the Federal Prospects Hockey League, being founded in 2011. They play in the David S. Palmer Arena. The Arena opened in 1980, and the original tenants were also called the Danville Dashers. The new Dashers have won one title, in 2017.

The general aviation community is served by the Vermilion Regional Airport.

Danville is known as a major railroad intersection with at least four different tracks entering town from different directions, resulting in many crossings throughout the town. CSX Transportation, Norfolk Southern Railway, and Kankakee, Beaverville and Southern Railroad all operate rail lines that pass through Danville. [68]