The Crow Indian Reservation (est. 1868) [3] [4] is the homeland of the Crow Tribe of Indians of the State of Montana in the United States. The reservation is located in parts of Big Horn, Yellowstone, and Treasure counties in southern Montana. It has a land area of 3,593.56 sq mi (9,307.27 km²) and a total area of 3,606.54 sq mi (9,340.89 km²), making it either the fifth or sixth largest reservation in the country. (Rankings are switched with the Standing Rock Indian Reservation depending on whether water areas are counted.) Reservation headquarters are in Crow Agency.

The Crow Tribe of Indians of the State of Montana has an enrolled tribal membership of approximately 11,000, of whom 7,900 reside on the Crow Indian Reservation. Eighty-five percent speak Crow as their first language.[ citation needed]

The Crow Indian Reservation, the largest of the seven Indian reservations in Montana, is located in south-central Montana, bordered by Wyoming to the south and the Northern Cheyenne Indian Reservation to the east. The reservation encompasses approximately 2,300,000 acres (9,300 km2), [5] which includes the northern end of the Bighorn Mountains, Wolf Mountains, and Pryor Mountains. The Bighorn River flows north from the Montana-Wyoming state line, journeying north to the Little Bighorn River just outside Hardin, Montana. Part of the reservation boundary runs along the ridgeline separating Pryor Creek and the Yellowstone River. The city of Billings is approximately 10 miles (16 km) northwest of this reservation boundary.

The PBS TV series Reading Rainbow partially filmed its tenth episode "The Gift of the Sacred Dog" here on June 17, 1983. The title was based on a book by Paul Goble and was narrated by actor Michael Ansara.

The reservation is located in old Crow country. Already in August 1805, fur trader Francois-Antoine Larocque camped at the Little Bighorn River and travelled part of the area with a Crow group. [6]

The reservation is a segment at the center of the 1851 Crow Indian territory as described in the Fort Laramie treaty. [7]

Pressure from the whites north of Yellowstone River and a Lakota (Sioux) invasion into Crow treaty guaranteed land from the east (the lead up to Red Cloud's War) [8] made the 1860s a trying time for the Crow. " Oglalas under Crazy Horse and Red Cloud and Hunkpapas and Minneconjous under Sitting Bull continued to follow the dwindling buffalo herds west from the Powder River, while gold seekers travelled north into the [Crow] region along the Bozeman [Trail] ...". Steamboats on the Missouri River brought an additional number of prospectors into the Yellowstone area. [9] The situation called for a new Crow treaty.

On May 7, 1868, the Crow sold around 30 million acres of their 1851 territory and accepted to live in a reservation. [10] The border to the south was the 45th degree of north latitude, while the 107th degree of longitude west was the eastern border. Both borderlines met the Yellowstone at a point. The connection of these two points followed the course of the river and made up the last border of the 1868 reservation. [11] It comprised about eight million acres. [10]

Crow chief Plenty Coups, the schooled Robert Yellowtail and others stopped the efforts to open the reservation in 1917. In a hotel room in Washington, D.C., they opened a powerful bundle over the incense of buffalo chips from animals in the National Zoo and prayed for help. "The next day the attempted appropriation of their land was soundly defeated". [14]

Robert Yellowtail made captions, when he became superintendent of his own tribe's reservation in 1934, the first Indian to do so. [15]

The Crow reservation got its present shape after moderate land cuts in 1937 and in connection with the construction of the Bighorn Canyon Dam in the 1960s. [16]

The value of the enormous amount of coal hidden under the surface in the old tribal territory became clear to the reservation Crows after the Arab Oil Embargo in the 1970s. [18] The Crow Nation owns 1.4 billion tons of coal, enough to match the total supply in the United States for a year. [19] The reservation's Absaloka coal mine provides half of the tribe's nonfederal budget. [20] The single-pit mine opened in 1974 and employs 170 people. [20] The decline of coal mining in the United States has forced the tribe to lay off 1,000 of its 1,300 employees. [20] Every tribal citizen receives a $225 coal payment every four months. [20] Half of the reservation's adult population is unemployed. [19]

In 2013, the tribe and Cloud Peak Energy agreed to open the Big Metal mine, which would have brought the company $10 million in revenue over the first five years. [20] President Barack Obama blocked the mine and then imposed a moratorium on any new coal leasing on public lands. [20] In March 2017, the Northern Cheyenne Indian Reservation sued Interior Secretary Ryan Zinke to stop his attempt to lift the moratorium. [20] 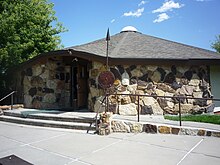 Chief Plenty Coups (Alek-Chea-Ahoosh) State Park and Home is located near the town of Pryor. It has a small museum dedicated to chief Plenty Coups and the Crow tribe. The chief's two floors lodge house (and at the same time grocery store) is preserved. [22]

For more than 100 years, since 1904, the Crow have organized the big Crow Fair, forming the "Teepee Capital of the World". By tradition it is held the third week in August. [23]