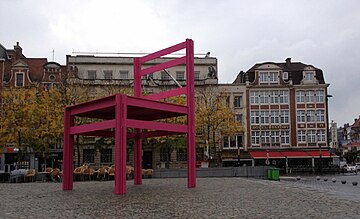 During the 2012 Design Biennale Interieur Courtray, a large scale model of a chair was placed on the central city square, the Grand Square, in order to attract the visitors' attention.

The Courtray Design Biennale Interieur ( Dutch: Design Biënnale Interieur Kortrijk) is a major international design exhibition that takes place once every two years (in even years) in the Belgian city of Courtray (Kortrijk in Dutch). The first Interieur Design Biennale took place in 1968. The Biennale is organised by the Biennale Interieur npo. During the fair, producers and designers present their innovating interior products to a broad cultural, commercial and professional audience. Over the years, the fair has introduced a number of side activities such as the YoungDesignersFair, Design at Work, Exterieur, lectures and debates. [1]

The first Design Biennale was held in 1968. The event took place in the 'Halls of Kortrijk', a new exhibition complex near the E17 highway. The event became more and more international during the following decades, and so it became one of the most important design biennales in Europe with international acclaim. [2] At the 2012 Design Biennale, the exhibition space came to the city centre for the first time. During this Biennale, not only the halls in Kortrijk Xpo, but also the brand new Arts Centre in the Buda Factory were used to exhibit new design. A shuttle service connected both exhibition spaces. The Biennale ventured even more in the heart of the city in 2014 with sublime locations such as the Buda Factory, the Buda Tower, the Broelmuseum and the Broeltowers. In 2016, Interieur will be centred around Kortrijk Xpo and the site of the Vlasmuseum in the heart of Kortrijk.

World famous design personalities have been invited as guest of honour:

Designer of the year award

This Designer of the year award is awarded by the Biennale Interieur npo in cooperation with style magazines Knack and Le Vif Weekend. This award is supported by the Design Museum Gent and Grand-Hornu Images.