Cornell College is a private liberal arts college in Mount Vernon, Iowa. Originally the Iowa Conference Seminary, the school was founded in 1853 by George Bryant Bowman. [5] Four years later, in 1857, the name was changed to Cornell College, in honor of iron tycoon William Wesley Cornell, who was a distant relative of Ezra Cornell (founder of Cornell University in Ithaca, New York).

Cornell students study one course at a time (commonly referred to as "the block plan" or "OCAAT"). Since 1978, school years have been divided into "blocks" of three-and-a-half weeks each (usually followed by a four-day "block break" to round out to four weeks), during which students are enrolled in a single class; what would normally be covered in a full semester's worth of class at a typical university is covered in just seventeen-and-one-half Cornell class days. While schedules vary from class to class, most courses consist of around 30 hours of lecture, along with additional time spent in the laboratory, studying audio-visual media, or other activities. Colorado College in Colorado Springs, Colorado; Maharishi University of Management in Fairfield, Iowa; Quest University in Squamish, British Columbia; Tusculum College in Tusculum, Tennessee; and The University of Montana - Western are the only other colleges operating under a similar academic calendar. Cornell formerly operated on a calendar of 9 blocks per year, but switched to 8 blocks per year beginning in the fall of 2012.

From its inception, Cornell has accepted women into all degree programs. In 1858, Cornell was host to Iowa's first female recipient of a baccalaureate degree, Mary Fellows, a member of the first graduating class from Cornell College. She received a bachelor's degree in mathematics. In 1871, Harriette J. Cooke became the first female college professor in the United States to become a full professor with a salary equal to that of her male colleagues. 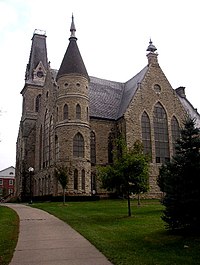 The most widely recognizable building on Cornell's campus is King Chapel. The chapel is the site of the annual convocation at the commencement of the school year as well as the baccalaureate service in the spring for graduating students. The chapel contains a large organ (over 3000 pipes) and is often the site of musical performances. Religious services are held in the nearby Allee Chapel.

Old Sem, for a short while, was the only building of the original college and now houses administrative offices of the college.

Cornell contains 9 academic buildings. College Hall (also sometimes called "Old Main"), the second-oldest building of the college, houses classrooms and offices of several social science and humanities departments. South Hall, originally a male dormitory, houses the Politics and Creative Writing Departments. Prall House contains offices and classrooms of the Philosophy and Religion Departments. The Merle West Science Center houses the Physics, Biology, and Chemistry Departments. West Science contains one of the school's two stadium seating lecture-style classrooms, with a capacity around 100. These have since been relocated to the new science building, Russell Science Center. It opened for classes for the 2019-2020 academic year. The Norton Geology Center contains both an extensive museum and classrooms for geological sciences. Law Hall includes the Math, Computer Science, and Psychology Departments, and is the computing hub of the campus. McWethy Hall, formerly a gymnasium, was remodeled and now contains the studios and offices of the Art Department. Armstrong Hall and Youngker Hall are adjoining fine arts buildings. Armstrong Hall is the location of the Music Department, while Youngker Hall contains the Theatre Department, including Kimmel Theatre. In addition, the Small Sports Center and the Lytle House contain classrooms of the Kinesiology Department.

Cole Library serves both the college and the Mount Vernon community. [6]

Cornell has several residence halls. Pfeiffer Hall, Tarr Hall, and Dows Hall together form the "Tri-Hall" area. Tarr was once an all-male residence hall, but now houses both males and females. Likewise, Dows, once an all-female residence hall, joins Pfeiffer and Tarr in providing co-ed housing. Tarr and Dows are both primarily freshmen dorms, while Pfeiffer houses upperclassmen as well as first-years. Pfeiffer was extensively renovated in 2008 and is co-ed by room. Bowman-Carter Hall is an all-female hall for upperclassmen, situated in an old hospital building. Pauley-Rorem Hall (commonly referred to as PR) is a combination of two residence halls that are joined in the middle by a common set of stairs. Female first-years resided in Pauley, and male first-years resided in Rorem until 2012-2013 when both residence halls became co-ed by floor. Pauley Hall was once home to the Pauley Academic Program, a community of male and female students with strong academic backgrounds. Pauley Hall was co-ed by floor as early as 1986, and in 1987-89, the second floor Pauley was home to the Academic Program and was co-ed by room. Olin and Merner Hall are co-ed upper-class residence halls. New and Russell Hall (the latter commonly known as Clock Tower) were opened in 2005 and 2007, respectively, and offer suite-style living. Students may choose more independent living options in apartments at Wilch Apartments, 10th Avenue, Armstrong House, and Harlan House, and even at the Sleep Inn. Nearly all Cornell students are required to live on-campus or in campus apartments, so most students do not rent non-college housing.

The Cornell campus is centered on a modest hill, the feature noted in the moniker "Hilltop Campus." Several campus buildings are grouped on the hilltop, while the athletic facilities and some residential buildings are located farther downhill on the campus's northwest side.

Cornell College fields 19 intercollegiate athletic teams, all of which compete in NCAA Division III sports. Formerly a member of the Iowa Intercollegiate Athletic Conference (IIAC), Cornell joined the Midwest Conference (MWC) in the fall of 2012.

Another Cornell team has also met with success recently. In 2011, the women's volleyball team captured the IIAC title and went on to take part in the national tournament for the first time in school history. Since then, the women's volleyball team has moved to the Midwest Conference (MWC) and won the MWC title seven times consecutively—six of those seven years making it to the national tournament.

Twenty-five Cornell students have earned NCAA Postgraduate Scholarships, awarded annually to students in their final year of eligibility who excel both athletically and academically. Cornell ranks in the top 15 Division III colleges in recipients of this award. [8]

Cornell's football rivalry with Coe College dates to 1891, making it the oldest intercollegiate rivalry west of the Mississippi. Coe currently holds the lead in the series, 60-51-4.

Cornell's mascot is a ram. In 1949, the Royal Purple, the school's yearbook, offered a $5 prize for someone who could come up with a new mascot to replace either the "Purples" or "Hilltoppers." A sophomore came up with the idea for the ram.