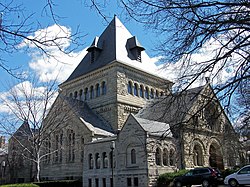 Shepley, Rutan and Coolidge was a successful architecture firm based in Boston, Massachusetts, operating between 1886 and 1915, with extensive commissions in monumental civic, religious, and collegiate architecture in the spirit and style of Henry Hobson Richardson.

The firm grew out of Richardson's architectural practice. After Richardson's death at age 47 in 1886, a trio consisting of George Foster Shepley (1860–1903), Charles Hercules Rutan (1851–1914), and Charles Allerton Coolidge (1858–1936) gained control of the firm and completed all of its nearly two dozen pending projects, including the John J. Glessner House in Chicago. Many of Richardson's projects were completed and modified in stages over years, making exact attribution difficult for such buildings as the Ames Gate Lodge in North Easton, Massachusetts, and even Richardson's masterwork Trinity Church, Boston.

Two of the principals had been educated at the Massachusetts Institute of Technology: Shepley (class of 1882) and Coolidge (class of 1883). Shepley married Richardson's daughter; and Coolidge later married Shepley's sister.

In 1888, the firm was commissioned by Senator and Mrs. Leland Stanford to join landscape architect Frederick Law Olmsted in planning the campus for Stanford University. For major commissions in Chicago and the World's Columbian Exposition, Coolidge moved to Chicago and the firm opened its branch office there in 1893, in which many Prairie School architects received their early professional training, notably Hermann V. von Holst who was head draughtsman. A St. Louis branch office began the career of John Mauran; a Pittsburgh branch office developed into several firms, including Rutan & Russell formed by Frank Rutan, the younger brother of Charles. Other Pittsburgh firms developed by branch office employees include Longfellow, Alden & Harlow and Frank I. Cooper; Pasadena architect Myron Hunt spent three years with them in Boston as draftsman. 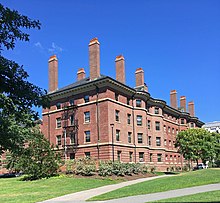