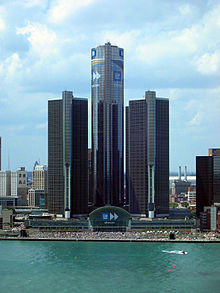 The Consulate-General of Japan, Detroit (在デトロイト日本国総領事館, Zai Detoroito Nippon-koku Sōryōjikan) is a diplomatic mission of Japan. It is located in Suite 1600 Tower 400 of the GM Renaissance Center in Downtown Detroit, Michigan. [1] Its jurisdiction includes the states of Michigan and Ohio. [2]

The consulate exists to promote trade business development and trade between Japan and the United States and to serve Japanese residents in the states of Michigan and Ohio. As of 2012 there were 18,000 Japanese residents living in those two states. [6]

It was scheduled to open on January 11, 1993 in an unspecified hotel facility, [7] which was in Downtown Detroit. [5] Japanese officials were looking for a permanent office space for the consulate. [7] Yasukuni Enoki [ ja] (榎 泰邦 Enoki Yasukuni) was the first consul general there. [8]

In 1993 the Japan Digest reported that the Japanese government had plans to station an official who would facilitate exports of American made cars to Japan and inspect and drive the models. This would ensure that the safety and emission testing under Japanese law is done more quickly. The U.S. automotive industry had complained of delays in this procedure. [9]

After the 2011 Tōhoku earthquake and tsunami occurred, the consulate received over 200 donations with a total of over $268,000. The consul general, Kuninori Matsuda (松田 邦紀 Matsuda Kuninori), offered his thanks to the people of Michigan and Ohio. [6]