Table of Contents ⇨
Not to be confused with Coffey County, Kansas.
City in Kansas, United States

Coffeyville is a city in southeastern Montgomery County, Kansas, United States, located along the Verdigris River in the state's southeastern region. [1] As of the 2010 census, the city population was 10,295. [6] It is the most populous city of Montgomery County and with its southeast Kansas location is in the Tulsa, Oklahoma media market. The town of South Coffeyville, Oklahoma is approximately 1 mile south of the city.

This settlement was founded in 1869 as an Indian trading post by Col. James A. Coffey, serving the population across the border in what was then the Indian Territory. The town was stimulated in 1871 by being made a stop on the Leavenworth, Lawrence & Galveston Railroad, which connected it to other markets and developments. With the arrival of the railroad, a young surveyor, Napoleon B. Blanton, was dispatched to lay out the town. The naming of the town was left to the toss of a coin between Col. Coffey and U.S. Army Captain Blanton. Coffey won the toss and the town was officially named Coffeyville.[ citation needed]

As a frontier settlement, Coffeyville had its share of violence. On October 5, 1892, four of the Dalton Gang were killed in a shootout during an attempted bank robbery; [8] Emmett Dalton survived with 23 gunshot wounds and convicted at trial for his crimes. He served 14 years before being pardoned. The gang had been trying to rob the First National and Condon banks, located across the street from each other. Residents recognized them under their disguises of fake beards and attacked the gang members as they fled one of the banks. Four citizens, including a U.S. marshal, Charles T. Connelly, died defending the town. The town holds an annual celebration each October to commemorate the Dalton Raid and the citizens who were lost.[ citation needed] 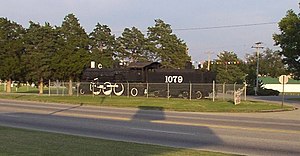 After the discovery of its resources of plentiful natural gas and abundant clay, Coffeyville enjoyed rapid growth from 1890 to 1910, as its population expanded sixfold. From the turn of the 20th century to the 1930s, it was one of the largest glass and brick manufacturing centers in the nation. During this same period, the development of oil production attracted the founding of several oil field equipment manufacturers, and more workers and residents. [7]

Coffeyville industrialist Douglas Brown founded Coffeyville Multiscope, which produced components of the Norden bombsight. This played a determining role in the perfection of precision daylight bombing during World War II as a result of the bombsight's advanced accuracy and drift correction capability.[ citation needed]

In 1930 residents in Coffeyville organized a Church of Latter Day Saints (LDS) Sunday School; it was one of only 11 places in Kansas to have such a facility then. [9]

On July 1, 2007, Coffeyville suffered a major flood when the Verdigris River crested at 10 feet above flood stage and flooded approximately a third of the city. The flood topped the local refinery ( Coffeyville Resources LLC) levees by 4 feet, allowing oil to pollute the water. Approximately 1700 barrels (71,000 gallons) of crude oil mingled with the already contaminated flood waters. [10] The EPA worked to prevent the oil and flood water mix from continuing downriver, where it could damage the water in Oologah Lake near Oologah, Oklahoma. Many residential water supplies are drawn from that lake. A minimal amount of oil reached Oolagah Lake, and it did not pose a threat to the water supplies of other cities along the Verdigris River or from the lake. A number of animals were found dead or injured in flood areas, covered with oil.

By July 2, areas east of Patterson Street were off limits, and a curfew was enacted in other areas of the city. On July 3, the city lost its supply of potable water, but the water service was restored and the order to boil water rescinded on July 7. The Federal Emergency Management Agency (FEMA) and the Red Cross came to aid residents, and Kansas Governor Kathleen Sebelius and President George W. Bush declared the city a federal disaster area. Most displaced residents found shelter with family and friends, but many were sheltered in two area churches and a senior citizens' apartment complex. Some pets were rescued to a temporary animal shelter built for them at LeClere Park.

The flooded area on the city's east side was reopened on July 11 for residents and business owners to begin assessing damage and to retrieve salvageable items.[ citation needed] 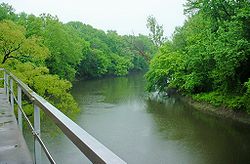 The Verdigris River at Coffeyville, 2006

In order to focus on the post-flood recovery and clean-up, the city and state cancelled the 2007 Inter-State Fair & Rodeo. [11] The ongoing flood recovery included a wholesale environmental remediation of the flood-affected eastern portion of the city, which continued through late 2008 to early 2009. Many of the flood-damaged homes were purchased by Coffeyville Resources LLC as a part of its effort to compensate the homeowners affected by the oil spill. [12]

Coffeyville, specifically a spot just north of Coffeyville Country Club, is the default center starting point of Google Maps, being the accidental center point of the default starting map being displayed, which shows the 48 contiguous United States. [13] ( Lawrence, Kansas also claims to be the Google center). Other locations that are considered to be the geographic center of the contiguous United States are also in Kansas.

Coffeyville has experienced a slow and steady population decline since around 1960, when its population peaked at more than 17,000. Changes in industry and oil production have caused a loss of jobs in the area, and residents have moved to find work. As of 2006 the population was estimated to be 10,387 in the year 2006, a decrease of 645, or -5.8%, over the previous six years. [15]

There were 4,226 households of which 28.2% had children under the age of 18 living with them, 39.9% were married couples living together, 13.5% had a female householder with no husband present, 4.8% had a male householder with no wife present, and 41.9% were non-families. 35.7% of all households were made up of individuals and 16.1% had someone living alone who was 65 years of age or older. The average household size was 2.29 and the average family size was 2.98.

There were 4,691 households out of which 26.8% had children under the age of 18 living with them, 45.0% were married couples living together, 11.9% had a female householder with no husband present, and 39.3% were non-families. 35.4% of all households were made up of individuals and 18.6% had someone living alone who was 65 years of age or older. The average household size was 2.25 and the average family size was 2.90.

Coffeyville has a long history as a center of industry and manufacturing.[ citation needed] Coffeyville Resources operates a 100,000 barrels per day refinery and a large nitrogen fertilizer plant, using a unique Texaco process of ammonia extraction from coke byproducts produced in the refinery. Sherwin-Williams Chemical Co. has operated a smelting facility in the community since 1909. [17]

Coffeyville is also home to John Deere Corporation's Coffeyville Works, which is a major manufacturer of off-road equipment automatic transmissions for the construction, agriculture and mining industries.[ citation needed] Acme Foundry is a foundry that has been in operation since 1905 and employs more than 300 people. [18]

Southwire Corp is a maker of stranded and solid core wire and acquired the Leviton Industries facility of American Insulated Wire in 2010. The plant was closed in 2014.[ citation needed]

Coffeyville is home to a fulfillment center leased since 1999 by online retailer Amazon.com. [20] It was opened in a facility previously operated by Golden Books. [21][ citation needed] After more than a decade of operations here, Amazon announced that it would close this warehouse in February 2015, because it was shifting to warehouses located closer to large cities. [22] [23]

Public education is provided by the Coffeyville School District (USD 445). The district educates almost 2,000 students in three facilities. [24] The district has one early learning center, one large consolidated elementary school with four pods and an Age-to-Age kindergarten, one middle school and one high school.

Five-year-old kindergarten children spend their days learning beside community members who have 80, 90, and even 100 years of life skills and experiences. Now, as we end our seventh year of intergenerational learning, it is evident that both age groups benefit from what the other generation has to offer. The needs of the elderly are met through reasons most people understand: the children offer them purpose and fill their days with energy and productive activities. The children’s needs are met at a different but equal level. The grandmas and grandpas have time to listen to their stories about family and pets and about what makes them happy and what scares them.

Age-to-Age Kindergarten offers a unique experience for students on a daily basis. Age-to-Age days are spent with intergenerational exercise, small group table times, individual sign-in times with a grandma, one-on-one reading, and regular social studies and science experiences. This is in partnership with Windsor Place.

The Coffeyville Journal is the local newspaper, published twice a week. [29]

Coffeyville is in the Tulsa, Oklahoma television market. [32]

Notable individuals who were born in and/or have lived in Coffeyville include: