Before the arrival of European settlers, the area that is now Cocke County probably was inhabited by the Cherokee. They were the most recent of a series of indigenous cultures who had occupied this country for thousands of years.

The first recorded European settlement in the county was in 1783 when land near the fork of the French Broad and the Pigeon Rivers was cleared and cultivated. The earliest European settlers were primarily Scots-Irish, Dutch, and Germans who came to the area over the mountains from the Carolinas or through Virginia from Pennsylvania and other northern states.

The county was established by an Act of the Tennessee General Assembly on October 9, 1797, from a part of Jefferson County, Tennessee. It was named after William Cocke, [5] one of the state's first Senators. Located within the Appalachian and Great Smoky Mountains, it had difficult conditions for early settlers.

Like many East Tennessee counties, settled by yeomen farmers who owned few if any slaves, Cocke County was largely pro-Union on the eve of the Civil War. In Tennessee's Ordinance of Secession referendum on June 8, 1861, the county's residents voted 1,185 to 518 against secession. [6] 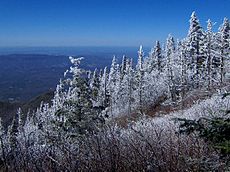 View from the slopes of Old Black

Cocke County is drained by the French Broad River, which traverses the northern part of the county and forms much of its boundary with Jefferson County. A portion of this river is part of Douglas Lake, an artificial reservoir created by Douglas Dam further downstream. The Pigeon River flows northward across the county and empties into the French Broad north of Newport at Irish Bottoms. 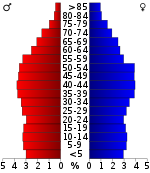 The novel Christy and the television series of the same name are based on historical events, people, and localities of Cocke County. The fictional small town of El Pano, where the novel begins, is based on the existing village of Del Rio, Tennessee. The fictional Cutter Gap, where most of the plot unfolds, represents the locale now known as Chapel Hollow. Several area landmarks associated with the story are marked for visitors, including the site of the Ebenezer Mission in Chapel Hollow, which is located off the Old Fifteenth Rd., about 5 miles (8.0 km) from Del Rio.

Like all of Unionist East Tennessee, Cocke County has been overwhelmingly Republican ever since the Civil War. Since the first postwar election in 1868, Cocke County has voted for every Republican Presidential candidate, even supporting William Howard Taft during the divided 1912 election. No Democratic Presidential candidate has managed to receive forty percent of the county's vote in this time, although Franklin D. Roosevelt in his 1932 landslide got within 0.23 percent of this figure.