Location of the Chippewa National Forest

Chippewa National Forest is a National Forest located in northcentral Minnesota, United States, in the counties of Itasca, Cass and Beltrami. Forest headquarters are located in Cass Lake, Minnesota. There are local ranger district offices in Blackduck, Deer River and Walker. 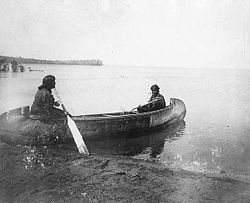 The Forest was established as the Minnesota Forest Reserve on June 27, 1902, with passage of the Morris Act. [2] While this act mainly addressed the disposition of unallotted lands on Ojibwe Indian reservations in Minnesota, 200,000 acres (810 km2) of the Chippewas of the Mississippi, Cass Lake, Leech Lake, and Winnibigoshish Indian reservations were designated as a Forest Reserve.

The Reserve was re-established as the Minnesota National Forest on May 23, 1908. [3] In 1928, the forest was renamed in honor of the Chippewa Indians from whose land the forest was created. Subsequent boundary expansions and land purchases increased the area of the forest to its present size.

The Forest contains an area known as the Lost Forty. This area, which has a total of 144 acres (0.58 km2), was accidentally mapped as part of Coddington Lake when the original maps of the region were laid out in 1882. [4] As a result of the mapping error, the Lost Forty was never logged. It contains some of the oldest forest in the state, with some trees more than 350 years old. Less than two percent of Minnesota's total forested land today is such old growth forest. These unique qualities offer an abundance of outdoor recreational opportunities throughout the year.

The historic Forest Supervisor's Office, built in 1936 - still in use today.

There are over 3000 archeological and historic sites located within the forest, two that are most notable and open to the public are:

Three of the top ten largest lakes in size within the State of Minnesota are located within the forest, these are Cass Lake, Leech Lake and Lake Winnibigoshish. Approximately 44% of the Forest's land is within the Leech Lake Indian Reservation.

Aspen, birch, pine, balsam fir, and maple blanket the forest. Old growth forest such as the Lost Forty section of the CNF is valuable for wildlife, including bald eagle, several species of hawk and woodpecker, red squirrel, weasel, and numerous other species. In the 1960s, the bald eagle population in the forest was only 12 nesting pairs. [7] Since then the population has rebounded and the bald eagle population of the Chippewa National Forest is one of the highest density in the lower 48 states at 150 nesting pairs. [8] 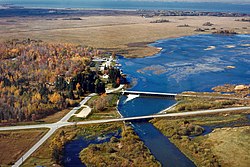 The Forest operates three visitor centers in the forest, they are [10]:

Many roadways, including U.S. and State Highways and county roads intersect the forest for easy access to the forest. Within the Forest are five scenic byways for scenic drives for visitors that intersect through the forest [11].