Urban blues evolved from classic blues following the Great Migration, or the Great Northern Drive, which was both forced and voluntary at times, of African Americans from the southern U.S. to the industrial cities of the north, such as Chicago. Big Bill Broonzy and Muddy Waters directly joined that migration, like many others, avoiding the more harsh southern Jim Crow laws. Bruce Iglauer, founder of Alligator Records stated that, "Chicago blues is the music of the industrial city, and has an industrial sense about it." Additionally, recognizing the shift in blues, Chicago blues singer and guitarist Kevin Moore expressed the blues transition stating, "You have to put some new life into it, new blood, new perspectives. You can't keep talking about mules, workin' on the levee." [1] Chicago blues was heavily influenced by Mississippi bluesmen who traveled to Chicago in the early 1940s. The development of blues, up to Chicago blues, is arguably as follows: Country blues, to city blues, to urban blues. Chicago blues is based on the sound of the electric guitar and the harmonica, with the harmonica played through a PA system or guitar amplifier, both heavily amplified and often to the point of distortion, and a rhythm section of drums and bass (double bass at first, and later electric bass guitar) with piano depending on the song or performer.

Urban blues started in Chicago and St. Louis, as music created by part-time musicians playing as street musicians, at rent parties, and other events in the black community. For example, bottleneck guitarist Kokomo Arnold was a steelworker and had a moonshine business that was far more profitable than his music. [2] 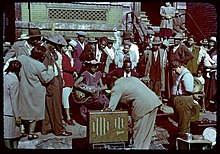 An early incubator for Chicago blues was the open-air market on Maxwell Street, one of the largest open-air markets in the nation. Residents of the black community would frequent it to buy and sell just about anything. It was a natural location for blues musicians to perform, earn tips, and jam with other musicians. The standard path for blues musicians was to start out as street musicians and at house parties and eventually make their way to blues clubs. The first blues clubs in Chicago were mostly in predominantly black neighborhoods on the South Side, with a few in the smaller black neighborhoods on the West Side. New trends in technology, chaotic streets and bars adding drums to an electric mix, gave birth to a new club culture. One of the most famous was Ruby Lee Gatewood's Tavern, known by patrons as "The Gates". During the 1930s virtually every big-name artist played there. [3]

What drove the blues to international influence was the promotion of record companies such as Paramount Records, RCA Victor, and Columbia Records. [4] Through such record companies Chicago blues became a commercial enterprise. The new style of music eventually reached Europe and the United Kingdom. In the 1960s, young British musicians were highly influenced by Chicago blues resulting in the British blues movement.

According to Christgau's Record Guide: Rock Albums of the Seventies (1981), Chicago blues saw its best documentation during the 1970s thanks in part to Alligator Records and its owner Bruce Iglauer, described by Robert Christgau as a "folkie Leonard Chess. [5]

Bluebird was an important Chicago blues label, notably due to the work of A&R/producer Lester Melrose, who created what is known as the "Bluebird Sound.". Many blues artists recorded for Bluebird, if only briefly, while Arthur Crudup, Lil Green and Tommy McClennan spent virtually their entire career with the label. [6]

Chess Records, run by brothers Leonard and Phil Chess, was probably the most famous of the Chicago record labels to feature or promote the blues. [7] Musician and critic Cub Koda even described Chess Records as "America's greatest blues label." It was active from 1950–1969 when the brothers sold the company. Most solo artists also did double duty as session musicians on the records of others.

Cobra Records (together with its Artistic subsidiary) was an independent record label that operated from 1956 to 1959. The label was important for launching the recording careers of Chicago blues artists Otis Rush, Magic Sam, and Buddy Guy. It signaled the emergence of a distinctive West Side Sound.

Cobra Records was started on Chicago's West Side in 1956 by Eli Toscano (a record store and television-repair shop owner). When his previous record label, Abco Records, created in early 1956 alongside Record man Joe Brown, failed to generate much interest, Toscano approached Willie Dixon about working for Cobra. Dissatisfied with his arrangement with Chess Records, Dixon joined Cobra. There he served in many capacities, including talent scout, producer, arranger, songwriter, and bassist, as well as guiding its artistic vision.

Delmark was formed when Bob Koester moved his Delmar label from St. Louis to Chicago in 1958 and remains active today. They are still known for jazz and blues. Artists recorded by the label include Roscoe Mitchell, Junior Wells, Robert Lockwood Jr. and Sonny Boy Williamson II. [9]

Earwig Music Company is an American blues and jazz independent record label, founded by Michael Frank in October 1978 in Chicago. Since its founding, Earwig Music has issued 66 albums, fifty-one produced by Frank, among them the last recordings of Louis Myers, Maxwell Street Jimmy Davis, and Willie Johnson.