The Chicago Sky is an American professional basketball team based in Chicago, playing in the Eastern Conference of the Women's National Basketball Association (WNBA). The franchise was founded before the 2006 WNBA season began. It is owned by Michael J. Alter (principal owner) and Margaret Stender (minority owner). The team experienced a period of success from 2013 to 2016, making four playoff appearances and playing in the 2014 WNBA Finals.

Like some other WNBA teams, the Sky is not affiliated with a National Basketball Association (NBA) counterpart, although the Chicago Bulls play in the same market.

In February 2005, NBA Commissioner David Stern announced that Chicago had been awarded a new WNBA franchise. The franchise was temporarily named WNBA Chicago. On May 27, 2005, former NBA player and coach Dave Cowens was announced as the team's first head coach and general manager. The team home would be the UIC Pavilion.

The team name and logo for the Chicago Sky were formally debuted on September 20, 2005, at the Adler Planetarium. Team President and CEO Margaret Stender claimed the team colors of yellow and blue represent "A beautiful day in Chicago between the blue sky and bright sunlight to highlight the spectacular skyline."

In November 2005, the team held an expansion draft to help build its roster of players. Among the notable selections were Brooke Wyckoff from the Connecticut Sun, Bernadette Ngoyisa from the San Antonio Silver Stars, Elaine Powell from the Detroit Shock and Stacey Dales (who had retired prior to the 2005 season) from the Washington Mystics.

On February 28, 2006, the team announced that two of the minority shareholders of the team are Michelle Williams, from the vocal group Destiny's Child, and Mathew Knowles, father of Destiny's Child lead singer Beyoncé Knowles.

The Sky achieved a 5-29 record in its first season, and finished last in the Eastern Conference.

After the season, Dave Cowens resigned from the Sky to join the coaching staff of the Detroit Pistons. University of Missouri-Kansas City women's head basketball coach Bo Overton was named the Sky's new head coach and general manager on December 12, 2006. 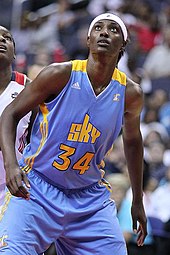 Their WNBA-worst 2006 record of 5–29 gave them the best chance of drawing the top pick in the 2007 WNBA Draft. However, the Sky would not draw either of the top two picks, and ended up with the third overall pick, which they used to select Armintie Price. They would get the first pick in the dispersal draft of the Charlotte Sting which they used to select Monique Currie.

In 2007, the Sky would field a vastly improved team. The core group of players from 2006 along with some new additions helped make the team competitive. The Sky would be Eastern Conference playoff contestants, even holding the 4th-place position for part of the season. But the Sky finished with a 14–20 record, two games behind the fourth and final playoff spot. Guard Armintie Price was named the 2007 WNBA Rookie of the Year after the season.

The Sky selected Sylvia Fowles with the second overall pick of the 2008 WNBA Draft. In the 2008 season, the Sky would once again fail to make the playoffs, posting a 12–22 record, finishing 5th in the East. The Sky's number one pick in the draft Fowles was injured for most of the season.

In the off-season, Fowles was selected to play on the United States Olympic team. In the 2008 Beijing Olympics she averaged 13.4 ppg and 8.4 rbg, leading her team to a perfect record and a gold medal.

In the 2009 WNBA Draft, the Sky selected point guard Kristi Toliver with the third pick. A standout player from the University of Maryland, Toliver was known for her impressive shooting ability and propensity to produce in critical situations. Never was this more evident than in the 2006 National Championship game when Toliver, then a freshman, shot a game-tying three-point basket to send the game into overtime (additional minutes) against Duke, eventually leading to a win and Maryland's first National Championship. In her debut season she averaged 7.6 points per game, 1.4 rebounds per game and 1.9 assists per game. 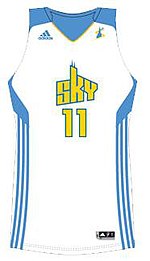 In the 2009 season, the team had high hopes of reaching the playoffs for the first time. The Sky would be conference playoff contenders all year long, even achieving the second-place position in the conference for a small portion of their season. Unfortunately, with a record of 16-18, the Sky were again eliminated from playoff contention after being involved in a three-team tiebreaker, with the Washington Mystics winning the breaker.

The Sky finished fifth in the Eastern Conference. They only needed to win the last game of the season at home against Detroit, but after being ahead by 14 points at halftime, the Sky fell behind by 18 points to a team that did not need to win this game since their playoff spot was sealed prior to the game.

On August 17, 2009, the Sky announced that the team's new home would be Allstate Arena, beginning in the 2010 WNBA season.

On September 23, 2009, USA Basketball announced Candice Dupree was one of 14 athletes invited to attend the fall training camp of the U.S. women's national team at American University in Washington. She joined her Sky teammate center Sylvia Fowles, who eventually made the Olympic roster for the 2012 Olympic Games in London.

Entering the 2010 season, the Sky made some offseason changes. The Sky traded Dupree to the Phoenix Mercury, and acquired Shameka Christon and Cathrine Kraayeveld from the New York Liberty. Then they traded Kristi Toliver to the Los Angeles Sparks. When the regular season began, they lost their first four games. At one point during the season, they were at .500 (won half and lost half of their games), just a few games back for the final playoff spot. However, the Sky ended up losing eight of their final ten games, eliminating them from playoff contention for the fifth consecutive season. They finished 14–20, sixth in the Eastern Conference. Key resigned as GM and coach.

The Sky selected Shey Peddy ( Temple) with the 23rd overall pick and Sydney Carter ( Texas A&M) with the 27th pick in the 2012 WNBA Draft. Peddy and Carter were both eventually waived on May 14, 2012. [9] The Sky began the season 7-1, but finished 14–20 for the second consecutive season. [10] The Sky remained the only WNBA franchise to never make the playoffs.

The 2013 WNBA season was a turning point for the Sky. Selecting Elena Delle Donne from Delaware with the second overall pick, as well as Brooklyn Pope, in the 2013 WNBA Draft, the team had high hopes. Delle Donne would become the first rookie to lead the All-Star voting, averaging 18.1 points per game (fourth in the league) and leading the Sky to a 24-10 regular season record, finishing first in the Eastern Conference. Reaching the playoffs for the first time, the Sky fell in two games to the Indiana Fever.

Delle Donne, Fowles, and teammate Swin Cash received multiple honors (Rookie of the Year, Defensive Player of the Year, Peak Performer in Rebounds, and the Kim Perrot Sportsmanship Award, respectively). Chatman finished a close second for Coach of the Year. Delle Donne narrowly missed the MVP award, while Fowles and Delle Donne were named to the All-WNBA first and second teams, respectively.

Although the team's 2014 season record would be an unimpressive 15-19, the Sky qualified for the WNBA playoffs and eliminated Atlanta and Indiana in the first two rounds, making it to the WNBA Finals for the first time. Despite being swept in the championship series by Phoenix, it was an all-time high for the Sky.

In February 2015, the Sky acquired Chicago native Cappie Pondexter from the New York Liberty in a straight-up trade for Epiphanny Prince.

They played in the 2016 WNBA playoffs. The 2016 season was also the first of three consecutive seasons in which Courtney Vandersloot set a new WNBA record for assists per game.

The Sky hired Amber Stocks as head coach and general manager on December 6, 2016. During the 2016–17 offseason, in what was called one of the biggest trades in league history, the Sky traded Delle Donne to the Washington Mystics, receiving Kahleah Copper, Stefanie Dolson, and the Mystics' #2 overall pick in the 2017 WNBA draft. [11] The Sky then missed the playoffs for the first time in five years in the 2017 season, posting a 12–22 record. In the ensuing 2018 WNBA draft, they selected Diamond DeShields and Gabby Williams in the first round. The Sky missed the playoffs for a second consecutive season in the 2018 season. On August 31, 2018, the Sky relieved Stocks as head coach and general manager. [12]

The Sky was on radio for two seasons on WVON-AM 1690 with Les Grobstein on play-by-play and Tajua Catchings (whose sister Tamika Catchings is a star with the Indiana Fever) handling color. After 2008, WVON did not carry games any longer over a financial disagreement, and the Sky has not been on radio since.

All games (excluding blackout games, which are available on ESPN3.com) are broadcast to the WNBA LiveAccess game feeds on the league website. Furthermore, some Sky games are broadcast nationally on ESPN, ESPN2 and ABC. The WNBA has reached an eight-year agreement with ESPN, which will pay right fees to the Sky, as well as other teams in the league. [14]