King was born February 2, 1868, at Camp Reynolds on Angel Island, California. [4] [10] His father was a Civil War Union Army general, General John Haskell King. [2] [5] His mother was Matilda C. Davenport, from the New England family line of Davenports that settled in Detroit. [4] [5]

King was first sent to Trinity College in Port Hope (Ontario) for two years, then went to Cascadilla School in Ithaca, New York, for preparation for entrance to Cornell University. [5] Then in 1887 he entered Cornell (engineering class of 1891), but was only there for two years. [4] He moved to Detroit around 1888 or 1889 at the age of 20, shortly after his father's death. His first full-time job was as a draftsman at Michigan Car Company in Detroit. [4] [5]

First car made by King 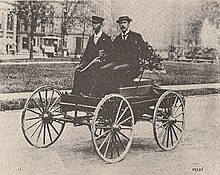 First car ever driven in Detroit.
Charles Brady King is on the right.

King started designing and building his first car from the time of the Chicago World's Fair of 1893. He test drove his first car in Detroit in front of hundreds of spectators on March 6, 1896, at speeds up to seven miles per hour. It was powered by a Sintz engine. The time was just before 11 P.M. The route that King did started from a building on St. Antoine Street, going first south toward the Detroit River. When he arrived at Jefferson Avenue he turned right. After passing by several businesses he arrived at Woodward Avenue. He turned right again onto that street. He again passed by several businesses and then stopped for a short time at Cadillac Square at the Russell House hotel. Henry Ford was present when King demonstrated his horseless carriage, riding a bicycle behind! [4] [11] [12] [13]

King showed to the Detroit public his car, which probably was the first in Michigan, however not the first in the world nor even the first in the United States. [4] King served as a mentor to Henry Ford, Ransom E. Olds and others for their inspiration to develop a "horseless carriage". Their gasoline powered automobiles came out months later. [3] [4] He did secret road tests in 1895, prior to this public display. [14]

The Detroit Journal interviewed King and he provided the Journal with his most famous quote:

I am convinced they [horseless carriages] will in time supersede the horse. [15]

The Detroit Free Press newspaper published an article the next morning:

The first horseless carriage seen in this city was out on the streets last night. It is the invention of Charles B. King, a Detroiter, and its progress up down Woodward Avenue about 11 o’clock caused a deal of comment, people crowding around it so that its progress was impeded. The apparatus seemed to work all right, and went at the rate of five or six miles an hour at an even rate of speed. [3]

King intended to run his motocycle in America's first automobile race on Thanksgiving Day in 1895. His car wasn't quite ready for the race, and like more than 70 other potential entrants to the event he was forced to drop out of the race. [16] Instead, King served as an umpire during the race on the car driven by Oscar Mueller. When Mueller collapsed from exposure near the end of the race, King took over as the driver. Other than the winning Duryea, this was the only other car to complete the entire course of the race. [4] [17] [18]

King joined the Olds Motor Works around 1900, but resigned after their plant burned down. [19] He then joined the Northern Manufacturing Company in 1902 and in 1903 became their chief engineer until 1908. One well known car he designed was the two-cylinder "Silent Northern" – the automobile with the first integrated motor and transmission assembly and the first side-step running boards. The 1907 Northern car model also had three-point engine suspension, air brakes, an air-controlled clutch and other innovations new to the auto industry of the time. [4]

King went to Europe for two years to study automotive design in 1908. When he came back in 1910 he started the King Motor Car Company with the knowledge he acquired. He was the first automaker to make cars with left-hand steering. He also was the first to successfully make a practical working V-8 engine. The King automobile called "the Eight" was advertised as "The Car of No Regrets." The King automobile was the only vehicle to feature left-hand steering at the 1912 New York Auto Show. He left the King Automobile company in 1912, however held full possession of his patents. The King name for the car company continued for many years thereafter and produced up to 1000 automobiles under this name. The company was ultimately absorbed by the Studebaker Car Company. [4] [20]

King was a founding member of the Automobile Old Timers in 1939, the original name of what was to become the Automotive Hall of Fame. [4]

King visited the World's Columbian Exposition in Chicago in 1893 to display two of his new inventions, a pneumatic hammer and a brake beam for railroad cars. By 1893 King worked for the Russel Wheel and Foundry Company and at the Exposition was put in charge of their exhibit in the Transportation Building, which he considered a great opportunity to learn about the latest engineering feats and exhibit his new inventions. [5] His pneumatic hammer invention (for riveting and caulking) was unique, being the only tool of its kind there, and earned him the Exposition highest award of a special diploma certificate and a bronze medal. [4] [5] [9]

King provided parts, instructions and assistance to Henry Ford for his first horseless carriage. [3] He gave Ford two valves from one of his engines during retrofitting so that Ford could build his first car, the Quadricycle. [4] [21]

King designed and assisted in building a 70-foot yacht called the Lady Frances that was sold to an Eastern buyer. It had many new innovations for gasoline motors, including a self-starting device. He formed with others the Michigan Yacht and Power Company. [22]

The American Motor League was organized by King [23] and he was issued the first membership number issued each year, No. 100. [24]

King is considered the inventor of the jackhammer. [25] He not only invented the jackhammer, [26] but several other machines, tools, mechanisms, attachments and sundry devices. [27] Below are just some of his 64 inventions that ultimately made him independently wealthy. [5]