Carol Elizabeth Moseley Braun, also sometimes Moseley-Braun [1] (born August 16, 1947), is an American diplomat, politician, and lawyer who represented Illinois in the United States Senate from 1993 to 1999. She was the first female African-American Senator, the first African-American U.S. Senator for the Democratic Party, the first woman to defeat an incumbent U.S. Senator in an election, and the first female Senator from Illinois. She was the only female U.S. Senator from Illinois until Tammy Duckworth who became the U.S. Senator from Illinois in January 2017. From 1999 until 2001, she was the United States Ambassador to New Zealand. She was a candidate for the Democratic nomination during the 2004 U.S. presidential election. Following the public announcement by Richard M. Daley that he would not seek re-election, in November 2010, Braun began her campaign for Mayor of Chicago. [2] The former Senator placed fourth in a field of six candidates, losing the February 22, 2011, election to Rahm Emanuel.

Carol Elizabeth Moseley was born in Chicago, Illinois. She attended public and parochial schools. She attended Ruggles School for elementary school, and she attended Parker High School (now the site of Paul Robeson High School) in Chicago. [3] [4] Her father, Joseph J. Moseley, was a Chicago police officer and jail guard and her mother, Edna A. (Davie), was a medical technician in a hospital. Both her parents were Catholic. [5] [6] The family lived in a segregated middle-class neighborhood in the South Side of Chicago. Her parents divorced when she was in her teens, and she lived with her grandmother. [7] She began her undergraduate studies at the University of Illinois at Urbana–Champaign, but dropped out after four months. [4] She then majored in political science at the University of Illinois at Chicago, [8] graduating in 1969 and earned a Juris Doctor degree from the University of Chicago Law School in 1972.

As an attorney, Moseley Braun was a prosecutor in the United States Attorney's office in Chicago from 1973 to 1977. An Assistant United States Attorney, she worked primarily in the civil and appellate law areas. Her work in housing, health policy, and environmental law won her the Attorney General's Special Achievement Award. [9]

Moseley Braun was first elected to public office in 1978, as a member of the Illinois House of Representatives. There, she rose to the post of assistant majority leader. As a State Representative, she became recognized as a champion for liberal social causes. [10] As early as 1984, she proposed a moratorium on the application in Illinois of the death penalty. And in what became a landmark reapportionment case, Crosby v. State Board of Elections, she successfully sued her own party and the state of Illinois on behalf of African-American and Hispanic citizens. When she left the state legislature in 1987, her colleagues recognized her in a resolution as "the conscience of the House." [11] That same year, she was elected as Cook County, Illinois, Recorder of Deeds, a post she held for four years. 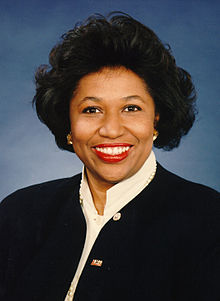 In 1991, angered by incumbent Democratic senator Alan Dixon's vote to confirm Clarence Thomas, Braun challenged him in the primary election. She was backed by the political coalition from the Hyde Park neighborhood of Chicago that had previously backed the campaigns of Harold Washington and Jesse Jackson. [12] Democratic candidate Albert Hofeld's campaign ran many anti-Dixon ads, and Moseley Braun won the Democratic primary.

Carol Moseley Braun was a one-term Senator, losing to Republican Peter Fitzgerald in her re-election bid in 1998.

Despite her reputation as a liberal Democrat, Moseley Braun possessed something of a centrist record on economic issues. She voted for the 1993 budget package and against the welfare reform laws passed in 1996, but on many other matters she was more conservative. Moseley Braun voted in favor of the North American Free Trade Agreement (NAFTA) and lawsuit reform measures like the Private Securities Litigation Reform Act (she was also among the minority of Democrats to support the even more controversial Common Sense Product Liability and Legal Reform Act of 1995). She also voted contrary to the interests of the more populist wing of the party by voting for the Freedom to Farm Act and the Telecommunications Act of 1996. Like her Illinois colleague, fellow Democrat Paul Simon, she voted in favor of a Balanced Budget Amendment to the United States Constitution and also to place a nuclear spent fuel storage facility in Nevada, a move strongly opposed by many Democrats, especially former Majority Leader Reid.

On social issues however, she was significantly more liberal than many of her fellow senators. She was strongly pro-choice, voting against the ban on partial-birth abortions and the restrictions on funding in military bases for abortions. She also voted against the death penalty and in favor of gun control measures. Moseley Braun was one of only sixteen senators to vote against the Communications Decency Act and one of only fourteen to vote against the Defense of Marriage Act. She delivered a eulogy to Thurgood Marshall on January 26, 1993.

In 1993, the Illinois Senator made headlines when she convinced the Senate Judiciary Committee not to renew a design patent for the United Daughters of the Confederacy because it contained the Confederate flag. The patent had been routinely renewed for nearly a century, and despite the Judiciary Committee's disapproval, the Senate was poised to pass a resolution sponsored by Senator Jesse Helms of North Carolina that included a provision to authorize the extension of the federal patent. Moseley Braun threatened to filibuster the legislation "until this room freezes over." She also made a plea to her colleagues about the symbolism of the Confederate flag, declaring, "It has no place in our modern times, place in this body, place in our society." [14] Swayed by Moseley Braun's argument, the Senate rejected the UDC's application to renew its patent. [15] [16]

Moseley Braun was the subject of a 1993 Federal Election Commission investigation over $249,000 in unaccounted-for campaign funds. The agency found some small violations, but took no action against Moseley Braun, citing a lack of resources. Moseley Braun only admitted to bookkeeping errors. The Justice Department turned down two requests for investigations from the IRS. [17]

In 1996, Moseley Braun made a private trip to Nigeria, where she met with dictator Sani Abacha. Despite U.S. sanctions against that country due to Abacha's actions, the Senator neither notified nor registered her trip with the State Department. She subsequently defended Abacha's human rights records in Congress. [18] Her former fiancé Kgosie Matthews, who also served on her campaign staff (in violation of U.S. immigration regulations [19]), had been a lobbyist for the Nigerian government; Matthews would later leave the country. She had paid Matthews, a native of South Africa, a salary of $15,000 a month during the campaign. [20]

In 1998, after George Will wrote a column reviewing the allegations of corruption against her, [21] Moseley Braun responded to Will's comments, saying that "I think because he couldn't say nigger, he said corrupt," [22] She also compared Will to a Ku Klux Klansman, saying: "I mean this very sincerely from the bottom of my heart: He can take his hood and put it back on again, as far as I'm concerned." [23] Later, Moseley Braun apologized for her remarks. [22]

Women were not allowed to wear pants on the U.S. Senate floor until 1993. [24] [25] In 1993, Senators Moseley Braun and Barbara Mikulski wore pants onto the floor in defiance of the rule, and female support staff followed soon after, with the rule being amended later that year by Senate Sergeant-at-Arms Martha Pope to allow women to wear pants on the floor so long as they also wore a jacket. [24] [25]

On October 8, 1999, [26] President Clinton nominated Moseley Braun to be the United States Ambassador to New Zealand. Although her nomination ran into token opposition from her old adversary, Jesse Helms, and the senator who defeated her, Peter Fitzgerald, the Senate confirmed her on November 10, 1999, in a 96–2 vote. [27] [28] [29] She served until the end of Clinton's presidency.

She announced her intention to run for the Democratic Party presidential nomination in February 2003. On January 15, 2004, two days after a disappointing third place showing in the D.C. primary [30] and four days before the Iowa caucuses, Moseley Braun dropped out of the race and endorsed Howard Dean. 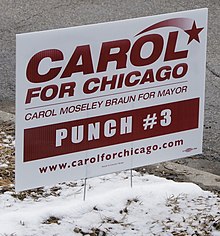 In November 2010, Moseley Braun announced she would run in the 2011 Chicago mayoral election, after mayor Richard M. Daley announced he would not be seeking re-election. [31] In early 2011 potentially strong African-American candidates congressman Danny Davis, and state senator James Meeks left the race and endorsed Moseley Braun, making her the so-called consensus black candidate. [32] [33] [34]

Mosely Braun had several difficulties with her candidacy, including a lack of funding. [35] She raised only roughly $550,000, compared to Rahm Emanuel who raised over $12 million. [35] Only a few of the city's African-American business leaders had contributed to her campaign, such as Elzie Higginbottom and John W. Rogers Jr. [35] There was also internal conflict within her campaign organization. [35]

In a debate on January 30, 2011, she accused another candidate, Patricia Van-Pelt Watkins of "being strung out on crack" for 20 years. [36] Van-Pelt Watkins had been formerly addicted to cocaine, but had been clean for 30 years. [35] This attack on Van-Pelt Watkins was seen as backfiring, and being detrimental to Mosely Braun's own candidacy. [35]

Moseley Braun came in fourth in the field of six, receiving about nine percent of the vote. In her concession speech, she remarked that her young niece could become the first female mayor of Chicago, [37] neglecting to mention Jane Byrne, Chicago's first female mayor, who served from 1979 to 1983. [38]

In 1973, she married Michael Braun, whom she met in law school. [5] They had one son, Matthew, in 1977. Their marriage ended in divorce in 1986. [10] She resides in the Hyde Park neighborhood of Chicago. She is an honorary member of the Delta Sigma Theta sorority.

In September 1998 a woman, Lauryn Kaye Valentine, applied to legally change her name to Carol Moseley Braun. Citing the former senator as her hero, and promising not to "dishonor [the] name", the change was made official. That December, however, Valentine put her name forward as a candidate for Alderman of the city's 37th Ward. [44] Before the election a Circuit Court judge rescinded the name change, forcing the woman to revert to her original name. [45] Valentine was later ruled ineligible to run, as she was not a registered voter at the time because of the name changes. [46]

In April 2007, Braun suffered a broken wrist when a mugger emerged from bushes near her front door to steal her purse, cutting the strap with a knife. Braun resisted and fell during the struggle, fracturing her left wrist. The mugger was chased off by a University of Chicago student while his girlfriend called 9-1-1. Braun was later treated and released from a hospital. [47] A suspect, Joseph Dixon, was later charged with the crime and was sentenced to 20 years in prison on July 11, 2008. [48]

Braun's financial problems made headlines in October 2012 when it was revealed that her home was in foreclosure as she had not made any mortgage payments for over a year. Before she was evicted, she managed to sell her house although the sale was " underwater" as she sold it for approximately $200,000 less than the amount she still owed on her loan. [49]

In 2007 Carol Moseley Braun was inducted into the Chicago Gay and Lesbian Hall of Fame as a Friend of the Community. [51]

Braun is on the advisory board of the Military Religious Freedom Foundation.[ citation needed]

An elementary school in Calumet City, Illinois bears her name.