A car with one of its windows broken. 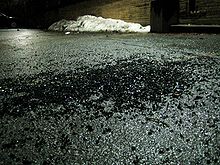 Shattered car window glass where a parked car was stolen.

Some methods used by criminals to steal motor vehicles:

Many keyless ignition/lock cars have weak [5] [6] cryptographic protection of their unlock radio signal or are susceptible to some form of record-and-playback or range extending attack. While proof-of-concept "thefts" of top-of-the-line luxury cars have been demonstrated by academic researchers using commercially available tools, such as RFID microreaders, examples of actual car theft using these methods are not very prevalent. [7]

The makes and models of vehicles most frequently stolen vary by several factors, including region and ease of theft. In particular, the security systems in older vehicles may not be up to the same standard as current vehicles, and thieves also have longer to learn their weaknesses. [8] Scrap metal and spare part prices may also influence thieves to prefer older vehicles. [9]

In Malaysia, Proton models are the most frequently stolen vehicles, with the Proton Wira being the highest, followed by the Proton Waja and the Proton Perdana.

In the United Kingdom, the Mercedes-Benz C-Class was the most stolen car in 2018, followed by the BMW X5. Police said the growing number of vehicles featuring keyless entry technology was a contributing factor to a rising number of stolen vehicles. [12]

There are various methods of prevention to reduce the likelihood of a vehicle getting stolen. These include physical barriers, which make the effort of stealing the vehicle more difficult. Some of these include:

Recovery rates for stolen vehicles vary, depending on the effort a jurisdiction's police department puts into recovery, and devices a vehicle has installed to assist in the process.

Police departments use various methods of recovering stolen vehicles, such as random checks of vehicles that come in front of a patrol unit, checks of all vehicles parked along a street or within a parking lot using automatic number plate recognition (ANPR) or keeping a watchlist of all the vehicles reported stolen by their owners. Police departments also receive tips on the location of stolen vehicles through StolenCar.com [13] or isitnicked.com [14] in the United Kingdom.

In the UK, the Driver and Vehicle Licensing Agency ( DVLA) provides information on the registration of vehicles to certain companies for consumer protection and anti-fraud purposes. The information may be added by companies with details from the police, finance and insurance companies. Such companies include Carfax [15] in the US, AutoCheck [16] and CarCheck [17] in the United Kingdom, Gapless [18] in Germany and Cartell in Ireland, which then provide online car check services for the public and motor trade. [19]

Vehicle tracking systems, such as LoJack, automatic vehicle location, or OnStar, may enable the location of the vehicle to be tracked by local law enforcement or a private company. Other security devices such as microdot identification allow individual parts of a vehicle to also be identified and potentially returned.

Criminologist Frank E. Hagan wrote that, "Probably the most important factor in the rate of motor vehicle theft is the number of motor vehicles per capita in the country." [20] Using data supplied by the United Nations Office on Drugs and Crime, [21] the estimated worldwide auto-theft rate is 65.8 per 100,000 residents. However, data is not available for all countries, and this crime rate reflects only the most recent year of reported data. For the 4,429,167,344 people these countries represent, there were a total 2,915,575 cars stolen. Uruguay has the highest auto-theft rate for any fairly large country in the world, at 437.6 per 100,000 residents in 2012. However Bermuda in its most recent year of reported auto-thefts (2004), reported a rate of 1324.0 per 100,000 people. But the population of Bermuda (65,000) is smaller than many cities in countries such as the USA and Canada. Some cities have higher rates than Bermuda, such as Newark, New Jersey, which had an auto-theft rate of 1420.6 in 2012. [22]

The United Nations Office on Drugs and Crime notes "that when using the figures, any cross-national comparisons should be conducted with caution because of the differences that exist between the legal definitions of offenses in countries, or the different methods of offense counting and recording". Crime rates in certain neighborhoods or areas in each country may also be higher or lower than the nationwide rate. Furthermore, because the vehicle theft rates shown in the table below are "per 100,000 population" -- not per 100,000 vehicles -- countries with low vehicle ownership rates will appear to have lower theft rates even if the theft rate per vehicle is relatively high.