The Canberra Deep Space Communication Complex (CDSCC) is an Earth station in Australia located at Tidbinbilla in the Australian Capital Territory. Opened in 1965, the complex was used for tracking the Apollo Lunar Module. Deep Space Network of NASA's Jet Propulsion Laboratory (JPL), managed in Australia by the Commonwealth Scientific and Industrial Research Organisation (CSIRO).

The complex is located in the Paddys River (a tributary of the Cotter River) valley, about 20 km from Canberra in the Australian Capital Territory. The complex is part of the Deep Space Network run by NASA's Jet Propulsion Laboratory (JPL). It is commonly referred to as the Tidbinbilla Deep Space Tracking Station and was officially opened on 19 March 1965 by then Prime Minister of Australia Sir Robert Menzies.

The station is separated from Canberra by the Murrumbidgee River and, more importantly, the Coolamon Ridge, Urambi Hills, and Bullen Range, which help shield the dishes from the city's radio frequency (RF) noise. Located nearby is the Tidbinbilla Nature Reserve.

The CSIRO manages most of NASA's activities in Australia.

In February 2010 CSIRO took over direct management of the site with the establishment of CASS (CSIRO Astronomy and Space Science).[ citation needed] Previous to this CDSCC had been managed by external sub-contractor organisations, such as Raytheon Australia from 2003-2010; BAE Systems (formerly British Aerospace Australia) 1990-2003; AWA Electronic Services -1990.[ citation needed] 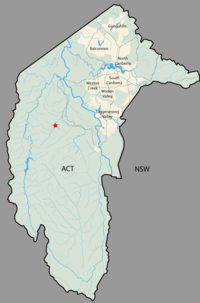 Tidbinbilla Locality Map, the site is marked with the red star.

As of late 2016 the Station has five large antennas in use: DSS-34, DSS-35, DSS-36, DSS-43, and DSS-45. The CDSCC also uses the Parkes radio telescope in central New South Wales at busy times to receive data from spacecraft. There has been ongoing construction since 2010 building additional 34 m beam waveguide antenna. Construction of DSS-35 began in July 2010. [1] The station's collimation tower is located approximately 3 km to the north-west, on Black Hill.