Buena Vista County ( /ˈbjuːnə ˈvɪstə/; Spanish pronunciation:  [ˈbwena ˈβista]) is a county located in the U.S. state of Iowa. As of the 2010 census, the population was 20,260. [1] Its county seat is Storm Lake. [2] The county is named for the final victory field of General Zachary Taylor in the Mexican–American War.

Buena Vista County was formed on January 15, 1851, from open land. It was named in memory of the Battle of Buena Vista in the Mexican-American War ending in 1848; the victorious United States annexed considerable territory as a result. [3]

2005 Census estimates of the racial origins of Buena Vista County's population indicated it had the lowest percentage of non-Hispanic Whites of any county in Iowa. The non-Hispanic whites constituted 76.1% of the county's population, with African-Americans being 1.3%, Asians 3.9% and Latinos 18.6% of the population. [12] 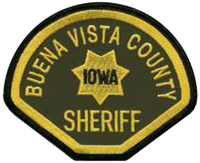 Law enforcement is the responsibility of the Buena Vista County Sheriff's Office (BVSO). The department provides law enforcement services for all areas of Buena Vista County, as well as providing for courthouse security, operating the county jail, and performing civil procedures. The current Sheriff is Kory Elston. [13] The staff includes a mix of full-time deputies and reserve deputies.

The population ranking of the following table is based on the 2010 census of Buena Vista County. [16]

Buena Vista County has mostly voted Republican throughout its history, only failing to back the party's candidates in a presidential election eight times throughout its history. The first of these instances was in 1912 when the Republican vote was split between incumbent William Howard Taft & former President Theodore Roosevelt, who won a majority of the county's votes as a third-party candidate. Five of the instances were national landslides for the Democratic Party in all four of Franklin D. Roosevelt's victories as well as Lyndon B. Johnson's 1964 landslide. The other two Democratic victories were in 1948 as Harry S. Truman narrowly won the county & statewide by a similar margin, & 40 years later in 1988 as Michael Dukakis was boosted statewide by the 1980s farm crisis despite his national landslide loss.